National Congress of American Indians President Fawn Sharp, left, posing in February with Rep. Deb Haaland, D-N.M., who has been nominated by President-elect Joe Biden to be Interior secretary. NCAI, like most tribal organizations, welcomed the nomination of Haaland – who would be the first Native American to be a Cabinet secretary – as a good omen for relations with the Biden administration. (File photo by McKenzie Sadeghi/Cronkite News)

WASHINGTON – The federal government may not have a stellar track record when it comes to keeping promises with Native Americans, but tribal leaders in Arizona said they think President-elect Joe Biden could be the exception.

Their hopes were reinforced last week when Biden nominated a Native woman, Rep. Deb Haaland, D-N.M., to be secretary of Interior. If approved, she would be the first Native American Cabinet secretary.

“She will bring a unique and long overdue perspective to the department, as well as a fierce determination to protect our environment and the rights of indigenous people,” Norris said in a statement Friday. “The Nation urges the Senate to quickly hold hearings and approve her nomination so she can get to work right away.”

Native leaders are optimistic because of Biden’s “track record with Indian Country,” from the integral part he played in the Obama administration, to his work with wife, Jill, to help open the first cancer clinic on the Navajo Nation, to his campaign pledge to “strengthen the nation-to-nation relationship” with tribes.

“I was a tribal leader during the … Obama-Biden administration and we had the key to the White House, we had a seat at the table,” said Navajo Nation President Jonathan Nez. “Based on that, I see that same approach being done this time.”

Whatever a Biden administration delivers, leaders said it “will be very, very different than what we’ve expected of the current administration.”

Navajo environmental advocate Carol Davis echoed Nez, saying that she’s optimistic about a Biden administration but that it will be starting in a hole left by the Trump administration.

“I do have confidence in the Biden administration, I just don’t think it will be easy when he’ll have the added challenges of repairing the damages left by this administration,” said Davis, noting that Biden may also have to deal with a Senate still in Republican hands.

“It will take 500 days to accomplish what previous incoming presidents accomplished in 100 days,” said Davis, executive director of Diné C.A.R.E. (Citizens Against Ruining our Environment). 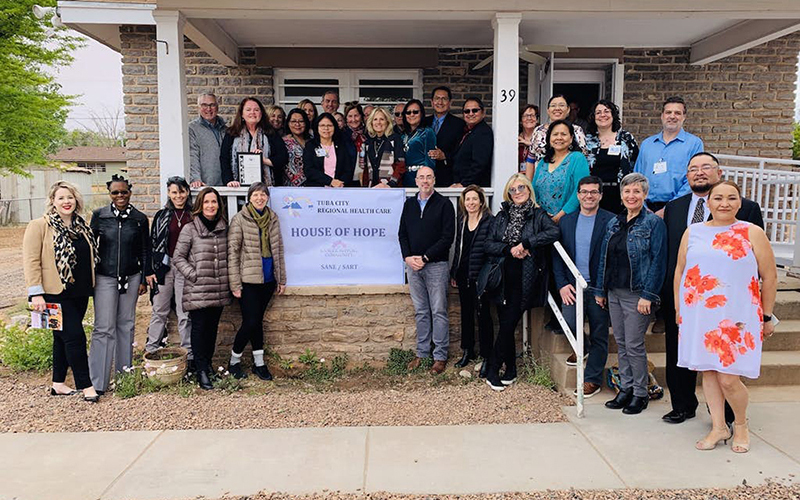 Soon-to-be first lady Jill Biden, center-right behind rail, with Navajo tribal and health officials in March 2019 at the opening of the House of Hope, the first cancer treatment center in Indian Country. (Photo courtesy Navajo Nation/Office of the President and Vice President)

Gila River Indian Community Gov. Stephen Roe Lewis said that while tribal leaders try to work with every administration, he looks forward to partnering with an administration where tribal consultation is “not a check-the-box exercise.”

He and other leaders and advocates cited a number of Biden-Harris policy priorities for tribal nations they said were in step with their own priorities. But their number one reason for hope was the first priority on Biden’s platform: “strengthen the nation-to-nation relationship.”

The support for a Biden administration is not surprising, considering that Native Americans have long been a reliable Democratic voting bloc.

“Voters on the Tohono O’odham Nation and other Arizona tribes made their voices heard loud and clear in the 2020 presidential election,” Norris said in a statement. “We look forward to a cooperative and respectful relationship with the Biden administration.”

Nez said he’s “seen a glimpse of how they keep their promises.” Lewis echoed the sentiment.

Along with Biden’s work on the Violence Against Women Act – which includes provisions for tribes to prosecute non-Native domestic violence offenders – Lewis pointed to Vice President-elect Kamala Harris’ experience enforcing the Indian Child Welfare Act as attorney general in California, which has a large Native American population.

Biden has already pledged to reinstate the White House Tribal Nations Conference – a convening of tribal and federal leaders started by President Barack Obama that has not been held since President Donald Trump took office.

Davis welcomed that step, but said it will take more than one meeting a year to understand tribal needs.

“I think they really do need to build a relationship, but not just with the tribal leaders,” she said, adding that tribal consent should extend to the community level and include non-governmental organizations.

Tribal leaders clothe then-President Barack Obama in Native American garb before his remarks to the eighth annual conference of tribes organized by the administration. President-elect Joe Biden has promised to revive the annual conference. (Photo courtesy the White House)

“We want BLM (the Bureau of Land Management) to come out into the communities and hold a public hearing,” she said, a type of outreach that “was very lacking in the last four years.”

That’s why she was so encouraged by the nomination of Haaland, who she thinks will be an “ideal” Interior secretary.

“Protecting our natural resources and public lands are responsibilities that are ingrained into Indigenous peoples. I believe Rep. Haaland has an inherent understanding of the duties and responsibilities the position requires, and because of this, she will excel,” Davis said.

While they like what they have seen so far, tribal leaders said there is much more they hope to see from a Biden administration, with health care at the top of the list.

Lewis said immediate COVID-19 relief is “mission critical” for the U.S., but particularly for tribal areas that have been hit hard by the pandemic. But he said tribal efforts have been thwarted by a lack of federal leadership on the issue.

COVID-19 is not the only health care problem in Indian Country, and officials welcomed Biden’s acknowledgement that “the Indian Health Service (IHS) has been underfunded for decades” and “consistently faces the uncertainty of the federal budget process.” He has pledged to increase and stabilize IHS funding.

As with COVID-19, Nez said infrastructure is both a tribal and a national issue.

Davis, who said the extraction of natural resources has made “the Navajo Nation … a sacrifice zone,” agreed with Nez that infrastructure should be a priority. While she thought the Biden-Harris platform could have been more detailed, she liked that it provided for small business development incentives, technical assistance for tribes, communication infrastructure development and a “just and equitable transition” toward clean energy.

But “the first thing we would like to see is reversal of the executive orders … that gutted parts of the Environmental Protection Act,” Davis said. She noted that this is something Biden could do without congressional approval.

Rep. Deb Haaland, D-N.M., speaks at a 2019 event of the American Federation of Government Employees. Haaland, nominated to be the Biden administration’s Interior secretary, would be the first Native American to run a Cabinet agency if confirmed. (Photo by AFGE/Creative Commons)

“We must also have an immediate end to construction of President Trump’s failed border wall, which has desecrated our sacred sites,” Norris’ statement said. “We will work with the Biden administration and Congress on action to ensure this can never happen again.”

Nez called the Haaland nomination a step in the right direction, thanking the “Biden-Harris team for making a statement and keeping their word to place Native Americans in high-level Cabinet positions.” But that doesn’t mean a Democratic administration should take Native Americans for granted, he said.

“We just got to remind those that got elected that we did assist them in this way (voting) and Native Americans in the past have contributed great things to this country,” Nez said.

Lewis said Biden’s election has reenergized his community, but the excitement comes with high expectations.

“It will take time,” Lewis said of Biden’s ability to follow through on his promises.

Nez said just having Biden and Harris in the White House is a start.

“I think this country needs inspirational leaders that will heal this country and move forward and to unite all peoples,” he said. “We’re looking forward to that.”

Even Davis – with her more cautious outlook – said of the Biden-Harris administration, “I have faith that they will try.”