Because it was approved in 1986, the Canyon Mine was not affected in 2012 when the federal government imposed a 20-year uranium mining ban on 1 million acres surrounding the Grand Canyon. Low prices for uranium have kept the mine from operating, but that could change and it could begin production – a move critics fear could threaten the canyon. (File photo by Jake Eldridge/Cronkite News)

WASHINGTON – For four years, the Trump administration took steps to boost uranium mining for what it called national security reasons, a move environmentalists saw as an attempt to open the door to mining near the Grand Canyon.

President-elect Joe Biden may be ready to shut that door for good.

“I can’t believe I have to say this, but we can’t let Donald Trump open up the Grand Canyon for uranium mining,” Biden tweeted in August, after a Trump administration task force on nuclear fuel proposed relaxing restrictions on mining on federal lands.

In a statement posted at the same time, Biden called the Grand Canyon an “irreplaceable jewel” and blasted the Trump administration’s mining plan, saying he would focus instead on developing clean energy. While Biden did not lay out a specific mining plan, his statement was still enough for Kevin Dahl.

“I’m thrilled that the new administration has taken that stand even before inauguration. It’s a well-considered policy,” said Dahl, the Arizona senior project manager for the National Parks Conservation Association.

“Mining on this land can be done responsibly and would bring hundreds of good-paying jobs to my district,” said Rep. Paul Gosar, R-Prescott. “As I have said on many occasions, this withdrawal is not about protecting the Grand Canyon, but crippling the domestic uranium mining industry.”

The withdrawal Gosar referred to was then-Interior Secretary Ken Salazar’s decision in 2012 to impose a 20-year moratorium on new mines on just over 1 million federal acres around Grand Canyon National Park. The moratorium was aimed at protecting the Grand Canyon watershed from “adverse effects of … mineral exploration and development.”

Dahl said the moratorium has allowed scientists to study the risks and impacts mining could have on the environment, and has led to interesting discoveries about the watershed.

“We are finding out more things about how water travels and how one spring in the Grand Canyon might be influenced by last winter’s snowpack, and how another spring might be being supplied with water from thousands and perhaps tens of thousands of years ago, depending upon the geology that supports it,” he said. 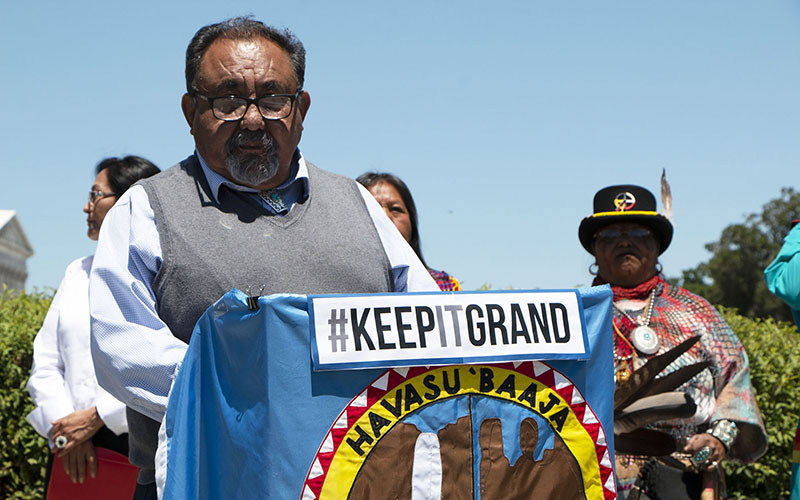 Rep. Raul Grijalva, D-Tucson, sponsored a bill to make permanent a 20-year moratorium on mining on 1 million acres around the Grand Canyon. The bill passed the House but stalled in the Senate. (File photo by Miranda Faulkner/Cronkite News)

Dahl worries the aquifers and faults make the Grand Canyon susceptible to water contamination and other negative effects of mining. He and other environmentalists point to the 17-acre Canyon Mine in Kaibab National Forest, which was in place before the moratorium took effect and was, therefor, exempt.

When workers drilled a 1,470-foot mine shaft in early 2018, they punched through a shallow aquifer so that “millions of gallons of water that are pouring into that mine shaft,” said Sandy Bahr, director of the Sierra Club’s Grand Canyon chapter.

“We are concerned that it is potentially contaminating the lower aquifer and there’s a lot of concern because that has potential for contaminating seeps and springs in the Grand Canyon,” Bahr said.

But Gosar said the threat is overblown.

Mohave County Board of Supervisors Vice Chairman Buster Johnson said he doesn’t see any downside to uranium mining on the lands frozen in Salazar’s moratorium. He points to the economic boost that mining would bring to the region and what he sees as the benefits of nuclear power.

“If I could put a nuclear power plant here in Mohave County, I’d do it in a second,” he said.

Both Johnson and Gosar acknowledge the environmental and health problems caused by uranium mining in the 1950s and 1960s, when there were few regulations and Cold War pressure to have a ready supply of U.S. uranium. But they insist those days are long gone.

“There’s no doubt that, especially the Indian nations up there, some of them got hurt with uranium mining in the ’50s,” Johnson said. “But that was run by the government. And they had no rules or regulations.

“So to say that people today would be doing something like that, even if they wanted to, that’s crazy because there’s too many people watching them,” he said. 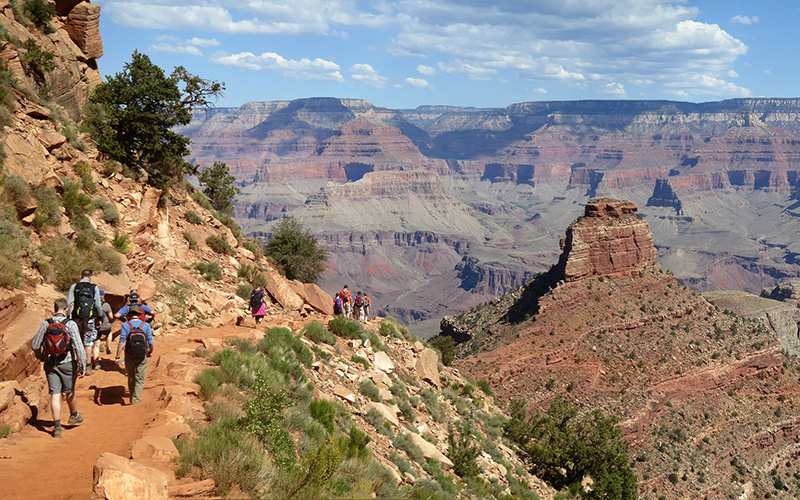 Hikers descend the Grand Canyon’s South Kaibab Trail in this 2013 file photo. Uranium mining backers agree that the Grand Canyon is an “irreplaceable jewel,” but insist it would not be threatened by modern mining. (Photo by Michael Quinn/National Park Service)

The most-important reason the Gosar and Johnson cite for more mining is the need to reduce U.S. reliance on foreign countries for our uranium.

“We can’t rely on somebody for the security of our country, on foreign countries,” Johnson said. “Our power plants, we have to see all of the things that we need. We have, you know, hospitals use a tremendous amount of uranium. It’s just a rare earth that we really, really need for the survival of our country.”

Bahr said moratorium opponents are “fishing for an argument” with their national security claims.

“If you look at the testimony on the Grand Canyon Centennial Protection Act, there are actually some security experts that testified on that,” Bahr said. “I mean, first of all, Canada and Australia, are the two main places where we’re getting our uranium. So that is not a very good argument.”

The act she referred to would make Salazar’s 20-year moratorium a permanent ban.

In February 2019, Rep. Raul Grijalva, D-Tucson, introduced the bill to permanently ban uranium and hardrock mining on 1 million acres of federal land near the Grand Canyon. While it passed the House easily in October 2019, a companion bill introduced in the Senate last December has stalled. That bill, sponsored by Sen. Kyrsten Sinema, D-Arizona, never received a hearing.

Biden said in his August statement that it is not a choice between jobs and the environment, claiming that creating a clean-energy infrastructure would “create millions of well-paying union jobs and revitalize our communities without jeopardizing the places we hold dear.”

With Biden in the White House, the need for a permanent ban is not as urgent – but Bahr said it is needed nonetheless.

“We would be very happy to see those lands around the Grand Canyon protected from mining so we don’t have to worry,” Bahr said. “It’s amazing how fast 20 years passes.”