A family in a Lebanese refugee camp in 2013 – when the U.S. capped refugee admissions at 70,000 people, more than four times the 15,000 cap set for 2010. President-elect Joe Biden has promised to raise the cap to 125,000 when he takes office, after four years of cuts by President Donald Trump. (Photo by Dragan Tatic, Austrian Ministry of Foreign Affairs/Creative Commons)

WASHINGTON – After years of steadily slashing the number of refugees it will accept, the U.S. can expect to see an increase under the incoming Biden administration.

An eight-fold increase and then some.

President-elect Joe Biden has said that when he enters office next month, he plans to raise the number of refugees who can be admitted to the U.S. to 125,000 from the current cap of 15,000.

Refugee groups in Arizona have compared the Trump administration’s cuts to the U.S. “closing its doors during the Holocaust.” The reduction comes despite what the United Nations High Commissioner for Refugees calls the largest international refugee crisis since the end of World War II, with almost 80 million people, or about 1% of the world’s population, forcibly displaced.

Other critics said the move harmed the country’s reputation as a world leader, for failing to lead by example.

But defenders of the new refugee ceiling – the lowest since the Refugee Act of 1980 – said it will protect American jobs during the recession and limit the abuse of the policy by those who are not in humanitarian need.

“The admission of up to 15,000 refugees to the United States during FY 2021 is justified by humanitarian concerns or is otherwise in the national interest,” Trump said in the Oct. 27 memo to the State Department ordering the cuts.

The memo also said the U.S. would bar refugees from Syria, Somalia and Yemen, calling those countries “high-risk areas of terrorist presence or control,” with some exceptions based on referrals, family reunification and religious persecution.

Phoenix resident Muktar Sheikh shudders to think what Trump’s latest order could have meant for him and his family, which was forced to flee a civil war there.

“That cap is putting a lot of families in struggle, especially those who’ve been waiting a long time and somebody shut the door on their face,” Sheikh said.

For refugees looking to find a new home, “when they get denied, they feel unwanted,” Sheikh said. “They feel almost as if they’re not humans.”

His own family’s path to the U.S. was not an easy one. They escaped to Kenya, then Egypt, living in U.N. refugee camps. After six years as refugees, and repeated rejection by other countries of their request for refugee status, they turned to the U.S. 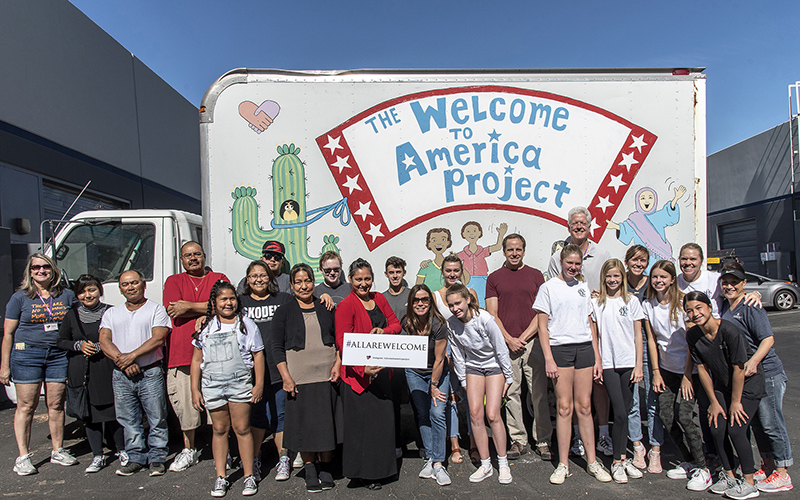 The Welcome to America Project is just one of many groups in the Valley that work to resettle refugees here. Arizona has taken in more than 80,000 refugees since 1980. (File photo by Sabine Thompson/[email protected])

Sheikh’s image of America was formed by his older brother’s somewhat limited knowledge. “We’re going where Rambo is at,” he recalled his brother saying.

The family resettled in Arizona where Sheikh said they were welcomed with open arms by the Somali Association of Arizona, where he now works. “It’s the first time I really had community,” he said.

Sheikh is one of more than 80,000 refugees that Arizona has accepted since 1980, according to the Arizona Department of Economic Security’s refugee resettlement program. But the number of resettled refugees has dropped sharply in recent years as the cap on admissions has been lowered.

Besides hitting refugees themselves, the cuts also hurt groups like the International Rescue Committee in Phoenix, whose federal funding is based on the number of refugees admitted each year.

Stanford Prescott, the IRC’s community engagement coordinator, said the reductions have hurt the group’s ability to provide services like housing, education and medical assistance to refugees, both the newly arrived and those who have been here for years.

“This really hampers our ability to help the people who are already here,” Prescott said. “We are able, through our programs, to serve refugees up to five years after arrival … the funding to provide that long-term support primarily comes from new arrivals.”

But Ira Mehlman is not convinced that every refugee the policy resettles is worthy of the status of “refugee.” The policy has loopholes that allow “economic migrants” into the U.S. who then threaten to take Americans’ jobs, he said, loopholes that must be closed before raising the refugee cap.

“(The 1980 act) has not really changed since then, but the world has changed,” said Mehlman, spokesman for the Federation for American Immigration Reform.

Prescott warns there is a down side for the U.S. closing its doors.

While the Biden administration is expected to reverse Trump’s policies, refugees like Sheikh wonder if they will come in time for some. He thinks about his mother who had to feed six children and what it would have meant for her to have to wait for a new administration to change the policy – “maybe another four years.”

“It’s heartbreaking and I could almost cry when family members come to me and they can’t see their son anymore because of Donald Trump,” Sheikh said.

But his background won’t let him stop loving the U.S.

“I always believed things could be better,” Sheikh said. “You develop that love as a refugee. When you’re finding a home, you probably love it more than the people who have long lived in this country because you know what it’s worth.”