Democrat Mark Kelly and Republican Sen. Martha McSally are separated by plexiglass as they participate in a debate at the Walter Cronkite School of Journalism and Mass Communication. (Photo by Rob Schumacher/POOL/The Arizona Republic via USA TODAY NETWORK) 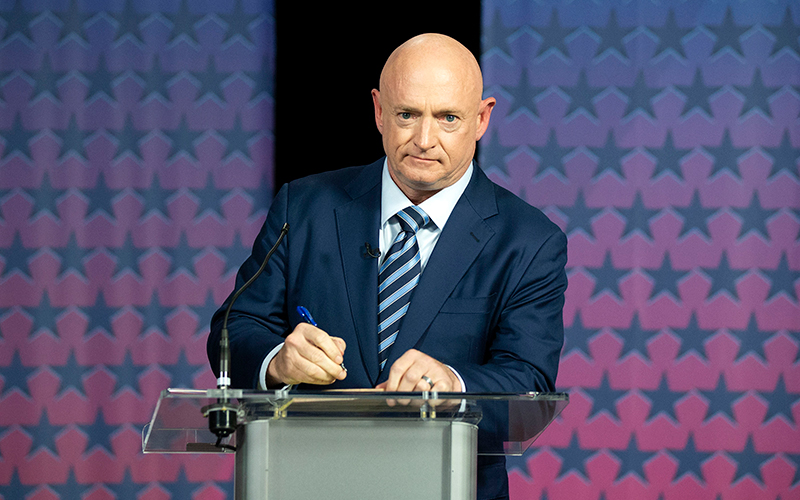 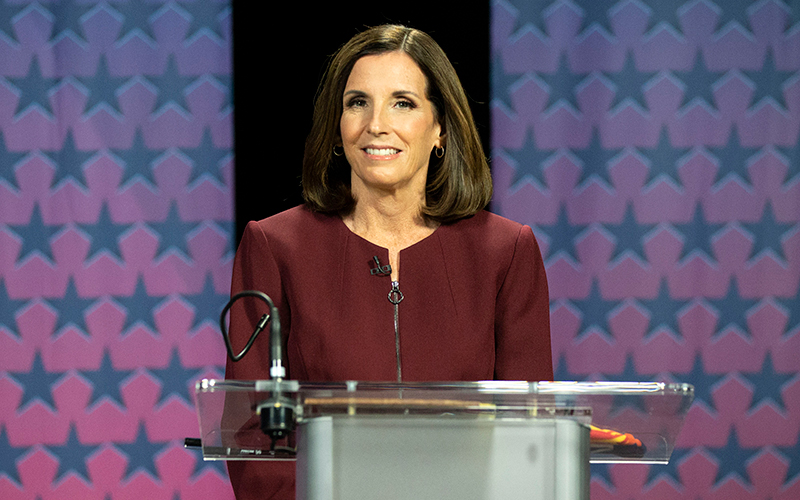 PHOENIX – Republican Sen. Martha McSally and Democratic challenger Mark Kelly, two military veterans battling for a congressional seat in Arizona that is drawing the attention of the nation, debated over the country’s COVID-19 response, jobs and immigration and President Trump’s attacks on Arizona Sen. John McCain.

Kelly and McSally wielded the usual disdain of political opponents, accusing one another of misleading Arizonans while outlining their own familiar campaign stances in a debate that offered few surprises.

McSally called Obamacare “a government takeover of health care,” praised the government response to the coronavirus and businesses suffering financial losses in the pandemic and said corporate interests that Kelly scorns actually bolster his campaign.

Kelly, a Navy veterans, called for expanding public health, said the naming of a Supreme Court justice should wait until a new president takes office, and reaffirmed his opposition to a border wall.

McSally, an Air Force veteran, is defending the seat she was appointed to two years ago, filling the vacancy left by the late Sen. McCain.

McCain may have been the only common ground between the two opponents. Kelly decried reports that Trump had humiliated the service of veterans and, even after McCain’s death, made fun of a Republican icon.

McSally agreed. “It pisses me off when he does that,” she said of Trump, adding she tells him to stop doing so. Trump has endorsed McSally.

Kelly and McSally offered dueling views of who has been most in fealty of China instead of holding off the superpower competitor, charged one another with being in thrall to corporate interests and repeatedly claimed they are the senator most likely to fight for Arizonans.

Kelly, a former astronaut and gun reform activist, has consistently led McSally in the polls in a race that could decide the future of the Supreme Court and has drawn national attention.

Throughout the debate, McSally consistently called Kelly “Counterfeit Kelly” and drew comparisons between him and former presidential candidate Bernie Sanders.

“He led over the last decade one of the most radical political organizations in modern history,” she said. “Raising over $57 million in order to help elect some of the most extreme left-wing politicians in power right now.”

Kelly largely used the debate to paint himself as a candidate for all Arizonans, stressing that he represents independence and non-partisanship.

The latest polls have Kelly leading McSally by double digits, reflecting the state’s shift from a red state to a battleground. The Senate race has garnered national attention, with the result having heavy implications for Arizona’s political future.

McSally has been a vocal supporter of the Trump administration, and has stated that the Senate should vote on Trump’s nominee for the Supreme Court, Amy Coney Barrett.

This U.S. Senate should vote on President Trump's next nominee for the U.S. Supreme Court.

Both contenders are following party lines, with most Republicans seeking to confirm a justice for the nation’s highest court while Democrats want to wait, hoping that former Vice President Joe Biden will become president. Kelly said in an interview with KTAR that the winner of November’s presidential election should choose the late Ruth Bader Ginsburg’s replacement.

During the debate, McSally stated that she was following the Constitution in her decision to support moving forward with the Supreme Court nomination process.

“Let’s be clear, the Constitution says that the president gets to nominate and the Senate gets to confirm,” she said.

The topic of China was brought up several times throughout the debate, with McSally repeatedly trying to tie Kelly to the country and its administration.

“Your business relationships put you in a place where you are weak on China.”

Kelly responded by saying that he “recognized China as an adversary” for his entire life, and that McSally has been falsely attacking him.

“Senator McSally just likes to lob false political attacks and question her opponents’ patriotism, we’ve seen it before,” he said.

The Trump administration’s response to the COVID-19 pandemic was hotly debated. Kelly said that he believed the administration and McSally did not do a good job responding to the pandemic, citing the U.S.’s coronavirus deaths as an example.

McSally praised the administration’s China travel ban, while placing the blame for the pandemic on China and the nation’s response. 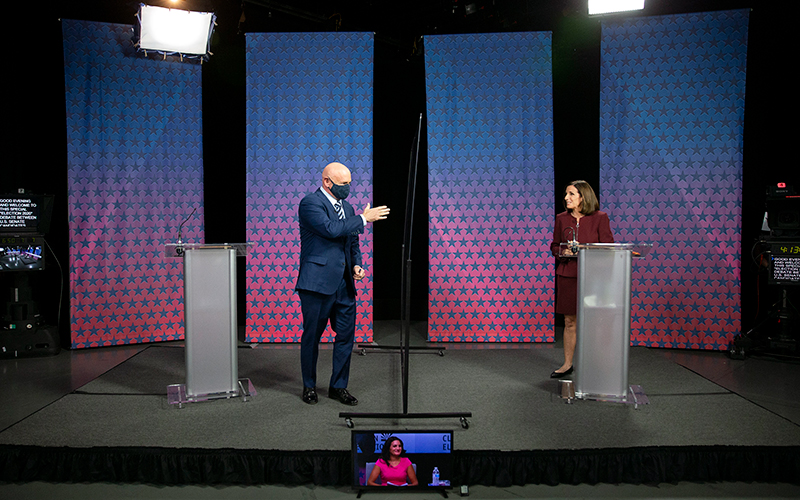 “This virus came from China, they silenced doctors, they destroyed samples, they blamed it on the U.S. Army, and we need to hold China accountable,” she said.

This debate comes as the McSally campaign has started to run Spanish-language ads in an attempt to appeal to Hispanic voters. The Kelly campaign has been running ads in Spanish for months and has far outspent McSally.

The two clashed on immigration and border security, with McSally claiming that Kelly refused to shake a border patrol agent’s hand and again expressing her support for the president’s proposed border wall.

In response, Kelly claimed that he did not know what McSally was referring to, and that he would “shake anyone’s hand.”

Kelly, when asked about border security, said that coming from NASA, he would not put forward “17th century solutions for 21st century problems.”

Recently, three former astronauts endorsed McSally over Kelly in an op-ed published in The Arizona Republic, saying that being an astronaut does not qualify Kelly for the position.

Kelly, the husband of former congresswoman Gabby Giffords, has made gun safety one of its primary issues. The former astronaut and pilot, along with his wife, co-founded the Giffords PAC, an advocacy organization promoting gun control.

Giffords, along with 8 others, were shot in 2011 during a constituent’s meeting in Tucson.

Kelly has also expressed support for a public healthcare option and expansion of renewable energy.

With record-breaking high temperatures here in Arizona this summer, we’re already seeing the effects of climate change. We can’t let partisan politics get in the way of stopping it. We need to follow the science, data, and facts to fight it. pic.twitter.com/2Kw5s08LLM

As the debate continued, the subject of climate change was raised. McSally claimed that Kelly was supportive of the Green New Deal resolution, repeatedly calling it the “Green Bad Deal”.

Kelly fired back, once again questioning where McSally was getting her information from. He said that he did not support the Green New Deal, and did not want to ban the use of fossil fuels as McSally had claimed.

When questioned about Trump’s supposed comments calling members of the military “losers” and “suckers”, McSally said that she would not comment on anonymous sources.

With both Kelly and McSally having served in the military, the candidates have made attempts to appeal to veterans. VetsForward and Common Defense, two veterans organizations, held a Veterans Against McSally event in downtown Phoenix just prior to the debate.

VoteVets, an organization dedicated to veteran’s issues, endorsed Kelly over McSally, citing his service and work with the nonprofit.

Tuesday’s debate is the only public debate of this year’s Senate race, although McSally has challenged Kelly to further debates.

Early voting for this race and others in Arizona begin on Oct. 7, lasting until Oct. 30. The deadline for voter registration is Oct. 23, per a recent order by a federal judge.