Former Arizona Congresswoman Gabrielle Giffords, who survived being shot in the head at a constituent rally in 2011, announced a new coaliton she and husband Mark Kelly said will promote gun safety and keep firearms out of the hands of dangerous people. (Photo by Kaddie Stephens/Cronkite News)

Giffords and her husband, Mark Kelly, said they formed Arizona Coalition for Common Sense to focus on closing legal loopholes that allowed people who shouldn’t have access to guns to buy and own firearms.

“We have loopholes in our laws that allow dangerous people easy access to firearms,” Kelly, a former NASA astronaut, said at a news conference. “Felons, domestic abusers and the dangerously mentally ill have an option to buy a gun without a background check.” 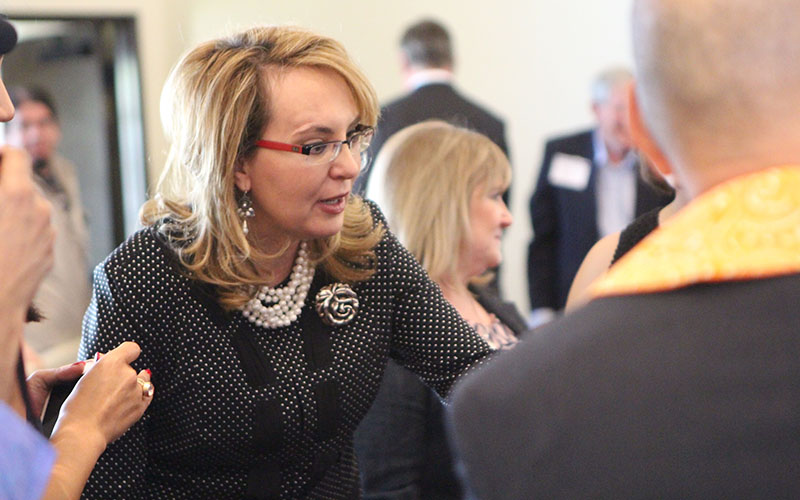 Charles Heller, media coordinator for the Arizona Citizens Defense League, which advocates for people’s constitutional right to carry guns, said legal loopholes in the state’s gun laws do not exist.

The members of the Giffords-Kelly coalition include gun owners, veterans, law enforcement officials, educators and business leaders who are dedicated to keeping guns out of the hands of the wrong people, according to a news release.

“Stopping gun violence takes courage,” Giffords said. “Now is the time to come together and be responsible.”

Giffords was seriously wounded at a constituent meeting in Tucson when Jared Lee Loughner started firing into the crowd. Six people died and 12 others were wounded. Loughner is serving consecutive life sentences.

Giffords, a Democrat from Tucson, resigned from Congress after the shooting. On the second anniversary of the shooting, she and Kelly founded Americans for Responsible Solutions, an advocacy group “for responsible gun ownership.”

Giffords and Kelly own guns, he said, and acknowledge guns are part of Western culture. But, he said, the prevalence of guns in Arizona emphasizes the need for responsible gun ownership and legal reforms. 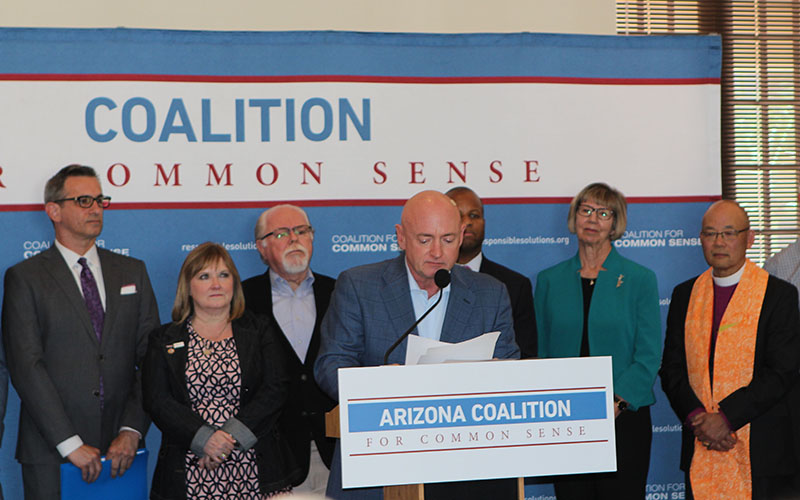 Mark Kelly, a retired NASA astronaut, worked with his wife, Gabrielle Giffords, to create the Arizona Coalition for Common Sense to help close what they call legal loopholes in gun laws. (Photo by Kaddie Stephens/Cronkite News)

“That is exactly why we need our leaders to do everything they can to keep guns out of the hands of dangerous people who want to do our families and communities harm,” Kelly said.

Kelly said Arizona had more than 3,000 firearms-related deaths last year, saying that is 40 percent higher than the national average. Domestic violence often is fueled by gun use, he said.

Heller said restrictions on buying guns in the state would only make it more difficult for law-abiding people.

“It’s a move towards making it more difficult for honest people to purchase guns,” Heller said. “That scares people like Congresswoman Giffords.”