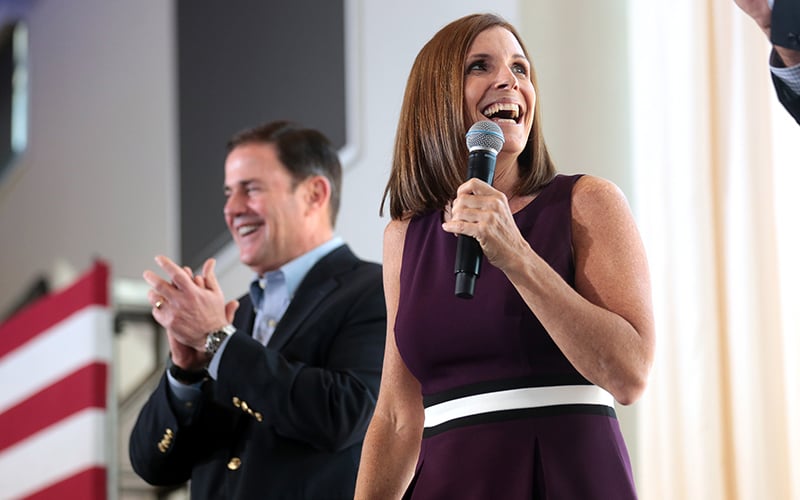 Rep. Martha McSally, R-Tucson, and Gov. Doug Ducey in October, when she was still a candidate for Senate. She lost that race to Sen.-elect Kyrsten Sinema, a Democrat, but Ducey on Tuesday tapped McSally to replace the late Sen. John McCain and serve alongside Sinema. (Photo by Gage Skidmore/Creative Commons)

WASHINGTON – Rep. Martha McSally, R-Tucson, lost her bid to replace Arizona Sen. Jeff Flake this fall but on Tuesday was given a seat in the Senate after all, when she was tapped to replace the late Sen. John McCain.

Gov. Doug Ducey on Tuesday appointed McSally to fill McCain’s seat for the next two years, when she will have to stand election in 2020 if she wants to serve out the remaining two years of McCain’s term.

McSally, a two-term House member, will become the third person to hold the seat in just four months: After McCain’s death in August, Ducey tapped former Sen. Jon Kyl to replace him.

Kyl at the time only promised to serve until the end of the year, and he made that official last week, telling Ducey he plans to step down as of 11:59 p.m. Dec. 31.

McSally will join Sen.-elect Kyrsten Sinema, the Democrat who beat her in the November race to replace Flake, a one-term Republican.

Arizona, which had not elected a woman to the Senate before Sinema, now will have two women senators, one of six states in the next Congress with two women in the upper chamber. Arizona will also be the only state with two freshmen in the Senate.

Ducey said he would “respect the will of the voters” and swear in Sinema as the state’s senior senator in January.

“Senator-elect Sinema was elected to the office and she’s going to be sworn in first,” the governor said.

The only requirement on Ducey was that McCain’s replacement be a Republican. But in making the appointment, Ducey said McSally’s history as an Air Force combat pilot and her four years in the House positioned her as someone who can hit the ground running.

“Arizona needs someone who understands the critical issues, who can get to work from day one, and who embodies a spirit of service – of putting the people we represent before all else,” Ducey said in his remarks. “Martha McSally possesses these qualities.”

Ducey noted that McSally was supported by more than 1 million voters in November’s election – a fact also highlighted by the Arizona Democratic Party, which charged that “Washington, D.C., insiders hand-picked” McSally after Arizona voters rejected her. McSally finished with 1,135,200 votes to Sinema’s 1,191,100.

“After running a divisive, dishonest campaign for over a year, Arizona voters rejected McSally because they don’t trust her to fight for them when it matters most,” said Democratic Party Chair Felecia Rotellini in a prepared statement Tuesday.

“(Senate Majority Leader) Mitch McConnell and Martha McSally are ignoring the will of Arizona voters to advance their agenda of putting their wealthiest donors ahead of Arizonans’ access to health care,” her statement said.

Despite running a largely negative campaign against Sinema, McSally said Tuesday that she looked forward to “working with Kyrsten Sinema in the Senate, just like we did in the House.”

“There’s a lot of common ground between us, and I’m ready to hit it running,” McSally said. “Arizona’s two senators have always worked together, for decades. That’s our tradition and how we’re most effective, and that’s how I plan to serve.”

She went on to say that she had “done a lot of listening and … learned a lot” while crossing the state in her Senate campaign, about the issues Arizonans care about – but did not touch on any specific issues Tuesday.

Although some Republicans had reportedly soured on McSally after her loss in November, Kyl on Tuesday called her “an excellent choice” and McCain’s widow, Cindy, said in a tweet that she respected Ducey’s choice of McSally to fill out her husband’s term.

“My husband’s greatest legacy was placing service to AZ and USA ahead of his own self-interest,” McCain wrote. “Arizonans will be pulling for her (McSally), hoping she will follow his example of selfless leadership.”