President Donald Trump during a rally in Phoenix in June, one of five trips he has made to the state so far this year. His campaign says to expect more as he battles for votes in the “toss-up” state, but others say it shows the campaign is in trouble in the usually red state. (Photo by Gage Skidmore/Creative Commons)

WASHINGTON – If there was any doubt that Arizona will be a battleground in this fall’s presidential election, a look at the travel itineraries this week of the first and second families should clear it up.

Senior Trump campaign adviser Steve Cortes said it’s not a coincidence, but proof that Arizona is a “toss-up state” and that the campaign is taking voters there “extremely seriously.”

“It’s a state that we won last time, but we don’t take it for granted by any stretch,” Cortes said. “We’re not going to be complacent.”

This week’s visits marked the fifth trip to the state this year for both Trump and Pence.

“Vice President Biden has put a record amount of resources into Arizona,” he said. “I’ve never seen a campaign pay as much attention to Arizona or put as many people and resources on the ground to increase voter turnout as they’re doing in Arizona.”

Both campaigns are smart to pay attention, but particularly the Trump campaign, said Jacob Rubashkin, a reporter and analyst for Inside Elections.

“The president is not meeting his mark in a lot of places,” he said.

Rubashkin said Arizona’s shift from Republican stronghold to battleground state in the past few years means the Trump campaign needs to work harder to win the state and its electoral votes.

In a poll roundup Friday from RealClearPolitics, Biden had a 5 percentage point edge over Trump in Arizona. It joins the ranks of states like Michigan, Wisconsin, Florida and Minnesota as battleground states that will likely decide the election in November.

“If you’re already losing Michigan and Wisconsin, you really can’t afford to lose a state like Arizona,” Rubashkin said. “And because Arizona at this point, if you believe the polling, is closer than a state like Michigan where Joe Biden has really established himself as a clear favorite in my opinion.”

Cortes doesn’t sound as worried as Rose and Rubashkin believe he should be about Arizona, where Trump won 47% of the vote in 2016 to 43.6% for Democrat Hillary Clinton. 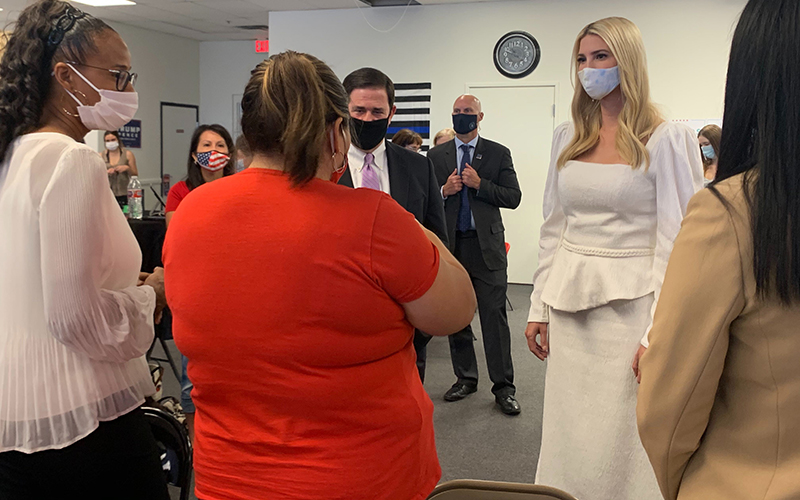 Rubashkin believes another reason Trump may be campaigning in Arizona is the COVID-19 pandemic, and the restrictions on public gatherings that come with it.

“A state like Arizona with a Republican governor and more Republican elected officials, I think provides an easier landing spot for the president, given that he has run into difficulty when he’s tried to do events in states where the leadership is not so friendly to him,” Rubashkin said.

Stanton criticizes the Trump rallies for putting voters’ health at risk, saying Biden is campaigning in a “much more intelligent and safe way.”

Despite not having in-person events, he believes the Biden campaign has “the people power” behind it that is focused on grassroots efforts such as phone banking. Stanton said this means “talking directly to voters and asking for their support.”

Biden’s wife, Jill, held a virtual roundtable for teachers last week and his running mate, California Democratic Sen. Kamala Harris, also recently held a virtual event that focused on Arizona. Biden himself has not visited the state yet this year, although he has previously said he plans to campaign in Arizona after Labor Day.

While Trump played to a big crowd Monday for what was billed as a roundtable, Rose believes those face-to-face events rely on “a marginal appeal and benefit for people that may be on the fence. So, that’s the calculation that’s being undertaken.”

Cortes called those visits a key part of the campaign’s strategy, which includes “of course, the president personally going to Arizona.

“I suspect we will be back there again before Election Day,” he said.

Vice President Mike Pence makes two appearances in Arizona, working to solidify President Donald Trump’s support among Hispanics and veterans. But not all veterans are joining the re-election efforts. (Video by Sthefany Rosales/Cronkite News)
Connect with us on Facebook.
Share this story: