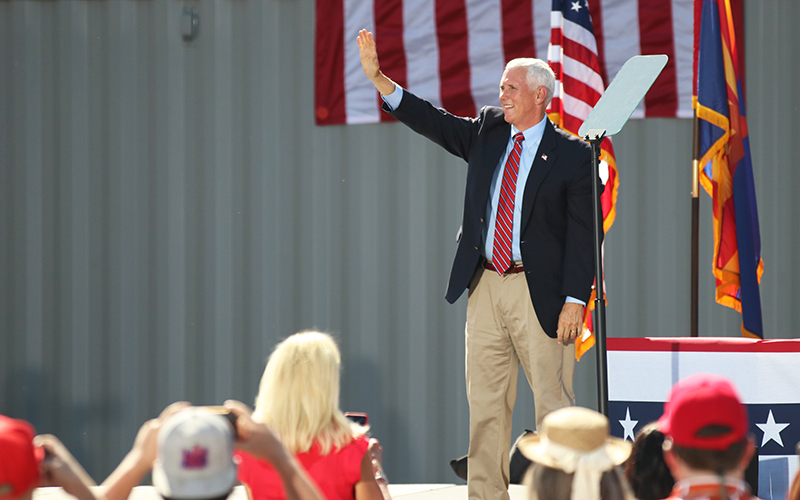 Vice President Mike Pence waves to a crowd of supporters at a rally in Peoria, Arizona, many of whom waited outside in the heat to hear his speech. (Photo by Megan Marples/Cronkite News) 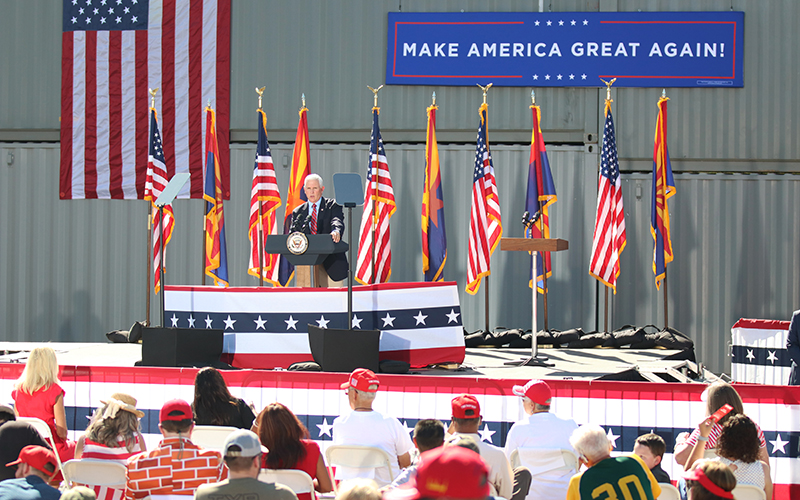 Many members of the crowd hold up signs and some wear branded masks, shirts, and hats in support of Vice President Mike Pence and President Donald Trump. The rally took place in Peoria, Arizona, on Oct. 8, 2020. (Photo by Megan Marples/Cronkite News) 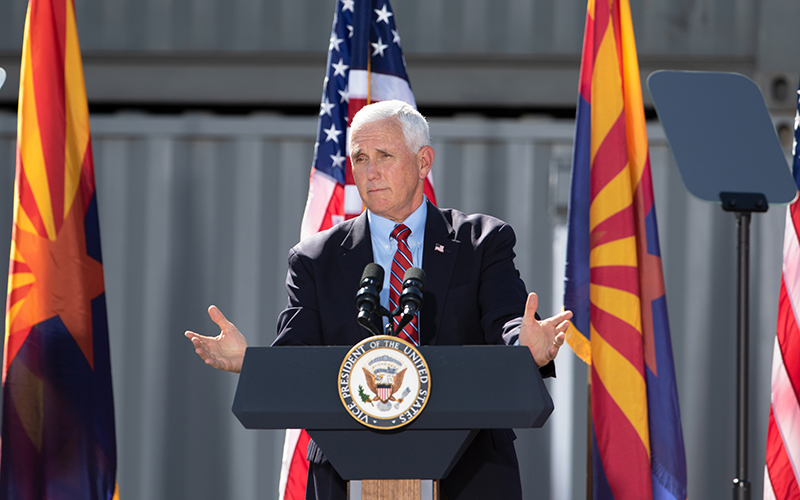 “If you didn’t figure it out watching last night, I’ll tip you off, they want to pack the Supreme Court and defund the police,” he told a crowd of about 300 outside TYR Tactical.

“So when you compare the Biden-Harris agenda with all that President Trump has done these last 3½ years, I think there’s no question about it,” he said. “President Donald Trump won that (Sept. 29) debate hands down.”

Pence did not wear a mask at the outdoor event but remained socially distanced. Masks were handed out, although not everyone wore them, and seats were set apart from one another, although not by the recommended 6 feet.

The appearance came on the same day Biden and Harris were in Phoenix, campaigning together for the first time. Repeated visits by both campaigns have firmly established Arizona’s evolving status as a battleground state.

Pence most recently visited the state Sept. 18, and several of Trump’s children have stumped here as well. The Trump campaign is aiming to repeat its 2016 performance in Arizona, which it won by almost 4 percentage points, but the polls consistently have Biden leading.

“When the memorials were over,” he said, “President Donald Trump fulfilled his constitutional duty and nominated a principled, experienced, brilliant, conservative woman to the Supreme Court of the United States.”

Reaffirming his support of police officers, Pence said the “men and women who serve in law enforcement across America are some of the best people in this country,” and that he and Trump are fighting for more funding and resources for police departments. 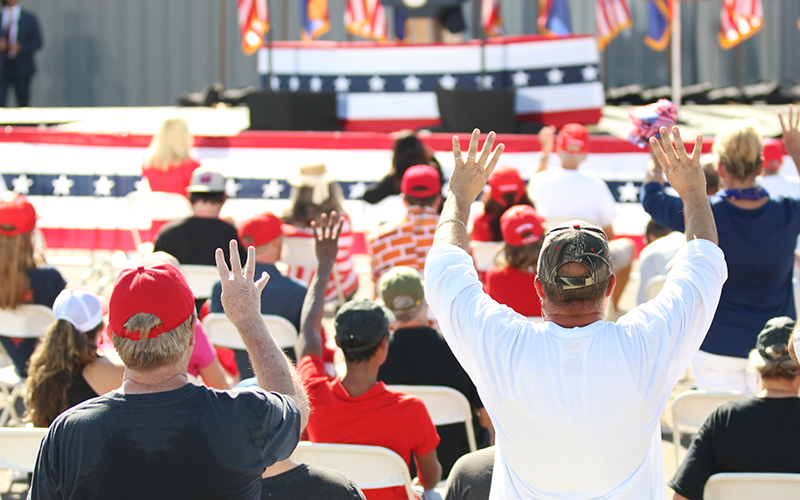 Supporters in a crowd hold up four fingers to show their support of Vice President Mike Pence and President Donald Trump getting elected for another four years. The rally was held in Peoria, Arizona, on October 8, 2020. (Photo by Megan Marples/Cronkite News)

“Under this president’s leadership … they’ve created more than 120 new Arizona jobs,” he said of TYR. “And every year, this company makes some 20,000 protective vests that are worn by law enforcement across America and American forces stationed all around the world.”

Pence also used the event to raise support for two Republican members of the House, David Schweikert and Debbi Lesko, saying that it was “time to retire Nancy Pelosi once and for all.” Both were present but neither spoke.

In an appeal to veterans, Pence took aim at the Veteran’s Affairs health care system, crediting Trump with enacting reforms and solving the issues that drew the Phoenix VA into controversy six years ago.

On the president’s diagnosis of and treatment for COVID-19, Pence said Trump is “doing just great, and he’s going to be back on the road and in the fight before you know it.”

Pence also praised the administration’s efforts in combating the pandemic, and he attacked what he called Biden’s opposition to China travel restrictions Trump imposed in January.

“President Trump’s actions suspending travel from China saved untold American lives and bought us time to stand up with the greatest national mobilization since World War II,” he said.

According to the Associated Press, however, travel from Hong Kong and Macao continued despite the restrictions, and more than 8,000 Chinese and foreign nationals came to the U.S. in the three months after Trump’s executive order on Jan. 31.

Pence, who serves as the head of the White House Coronavirus Task Force, said it’s on track to produce tens of millions of doses of a safe and effective vaccine by the end of the year.

However, CDC Director Robert Redfield has told lawmakers that a potential COVID-19 vaccine is unlikely to be widely available before mid-2021.

Pence also praised Gov. Doug Ducey and his cooperation with the administration, saying the second-term Republican governor had cut the state’s unemployment rate and brought Arizonans back to work. Ducey was not at the event.

As Nov. 3 inches closer, the Trump campaign has either postponed Arizona events or plans to hold them virtually.