President Donald Trump, shown here at a Monday event in the Rose Garden to discuss the state of coronavirus testing in the U.S. Trump announced late Thursday that he and the first lady tested positive for COVID-19 and would be quarantining. (Photo by Shealah Craighead/The White House)

WASHINGTON – News that President Donald Trump tested positive for COVID-19 led to well-wishes from Arizona lawmakers Friday, a scrambling of the president’s planned visits to the state next week – and some grumbling about the lack of safeguards at previous Trump rallies.

The White House announced Friday morning that Trump and first lady Melania Trump would be quarantining at the White House after both tested positive for the virus, which a staffer had contracted earlier in the week.

By Friday afternoon, doctors had transferred Trump to Walter Reed Medical Center out of “an abundance of caution.” He was expected to remain there for several days and was reported to be “fatigued but in good spirits.”

The White House physician said Trump was treated with a “polyclonal antibody cocktail,” including zinc, vitamin D and famotidine, an antihistamine. Late Friday, the White House physician announced that Trump had started treatment with remdesivir, an experimental drug the use of which was recently expanded to include anyone hospitalized with a COVID-19 diagnosis.

The Trump campaign said Friday that all future campaign events – including one planned Monday in Tucson and another in Flagstaff on Tuesday – will be performed virtually or postponed indefinitely. 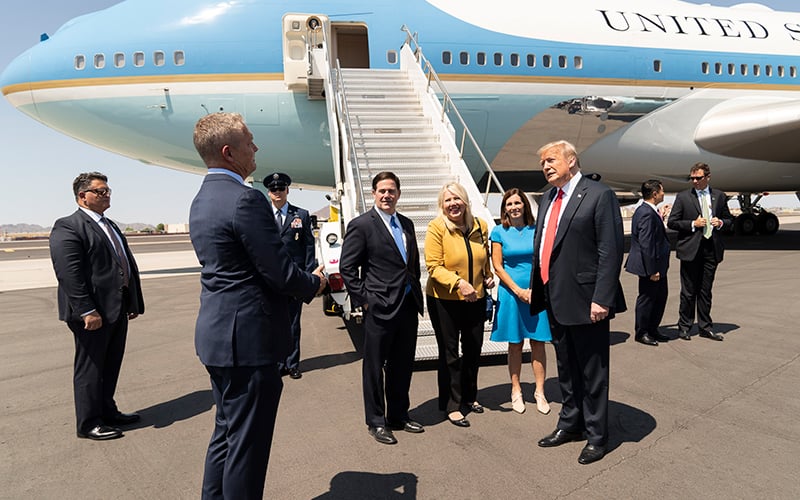 An Arizona campaign event by Democratic challenger Joe Biden, meanwhile, is scheduled to go on. Biden, who shared a debate stage Tuesday with Trump, said he and his wife, Jill, both tested negative Friday for COVID-19.

“Jill and I send our thoughts to President Trump and First Lady Melania Trump for a swift recovery,” Biden tweeted Friday. “We will continue to pray for the health and safety of the president and his family.”

Biden was one of countless politicians, from both sides of the aisle, who wished Trump a speedy recovery Friday.

“Keeping @realDonaldTrump and @FLOTUS both in my prayers during this time. Praying for a swift recovery,” said Rep. Debbie Lesko, R-Peoria, in a tweet.

Rep. Raul Grijalva, D-Tucson, who tested positive for the coronavirus, said he still feels some effects of the disease, which should not be taken lightly.

“I know from experience that COVID-19 is a serious issue, and I wish the President & First Lady a full recovery,” Grijalva said in a tweet. “They now join over 7 million Americans & their families who know all too well the severity of this virus.”

The absence of Trump and appearance of Biden is a departure from the recent campaign trail, where Trump routinely packs halls with people, few of whom – including Trump – wear masks.

Biden, by contrast, has typically opted for virtual campaign events, something Trump has criticized him for. Biden’s relatively few in-person events are limited in scope and the former vice president usually wears a mask.

Biden and his running mate Sen. Kamala Harris, D-Calif., are scheduled to visit Arizona in person Thursday for the start of mail-in voting in the state.

Trump’s rallies regularly draw sometimes fanatical crowds of die-hard Trump supporters – who may be better off now that the president’s Arizona events have been canceled, said Jesse Lee with the Center for American Progress Action Fund.

“They see the president come to their state, and have these events that are actually pretty wildly irresponsible,” Lee said. “It puts their families at risk.”

The impact of Trump’s absence from the campaign trail is less clear when it comes to the race itself. Some analysts said it might make Trump more sympathetic to voters, while others said it puts his mishandling of the pandemic front and center.

Jason Rose, founder of an Arizona political consulting firm, said that in times of crisis “there is a tendency to sympathize” with a president.

“And after the presidential debate where Trump came across as the most unsympathetic figure in American history, I think this will take some of the edge off that criticism,” Rose said.

But Chad Campbell, senior vice president of Strategies 360, said Trump’s illness shines a spotlight on COVID-19, a focus of the Biden campaign’s criticism. 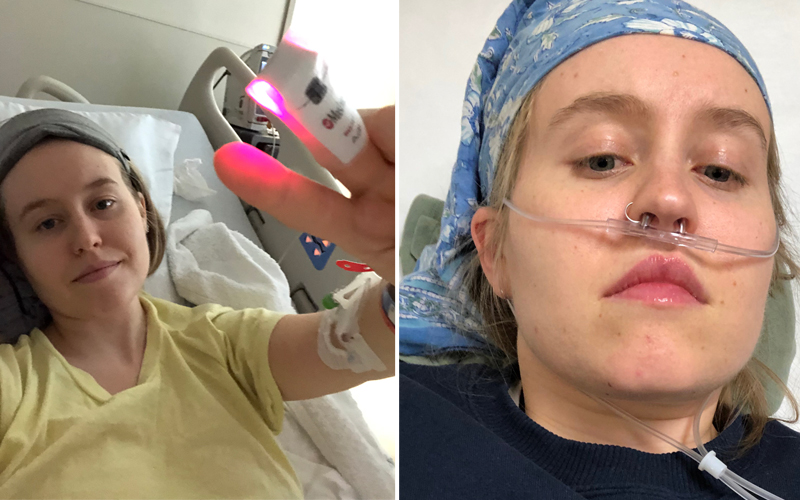 'Long-haulers' battle COVID-19 for months, but research into why is scant

“This probably isn’t actually very good for him with the few remaining voters that are undecided,” Campbell said. “And for the voters that are concerned about COVID, this brings the conversation right back to COVID and his mishandling of it from day one.”

Stacy Pearson, senior vice president at Strategies 360, said she does not think Trump’s inability t0 host a campaign rally will affect turnout at the polls among his Arizona supporters.

“I think people who were voting for Trump anyway are attending those events,” Pearson said. “Not having a super-spreader crackpot festival in Tucson is not going to impact his base.”

An average of polls by FiveThirtyEight showed Biden leading Trump by an average of slightly over 3 percentage points in Arizona as of Friday. Biden held more than a 7-point lead nationally, the site said.

Rose said there is still a chance that a “small slice” of the electorate could change their view about Trump, should his views on the seriousness of the virus change now.

“For elections considerations, there’s going to be a slice … that says, ‘You know, maybe he was a little cavalier about this. Maybe he should’ve taken things more seriously,'” Rose said. “‘But now that he’s gotten it, he’s going to get it.'”

Campbell was not so sure it would shift many decision on how to vote this fall.

“I think most people are ready for this election to be over with quite frankly,” Campbell said. “They want to get their ballot, they want to vote and call it a day.”