A relief drive on the Navajo Nation Reservation delivers COVID supplies to dozens of families in the Many Farms area while helping to sign more residents up for the census. The Sept. 17 event was the latest in a series of COVID-19 relief efforts held since the tribe received the final portion of its CARES Act money. (Photo by Daja E. Henry/Cronkite News)

MANY FARMS – On a hazy weekday morning, Navajo Nation President Jonathan Nez and about two dozen masked volunteers pull into the parking lot of a local chapter house. For as far as the eye can see, cars and trucks line up along Indian Route 59.

The volunteers, including representatives from World Central Kitchen, hustle to unload horse trailers crammed with cases of bottled water, diapers and boxes of mostly locally sourced foods – including neeshjizhii, a steamed corn that one volunteer calls “gold.”

After a prayer, the workers begin hoisting supplies into the car trunks and pickup beds of tribal members. Then residents are directed to census specialist Arbin Mitchell, who holds a “Shape Your Future” Census 2020 banner to ensure no one passes until they’ve signed up.

The drive is the latest in a series of COVID-19 relief events Nez’s office has held since the nation received the final portion of its $714 million CARES Act money.

The effort has two goals: help the 174,000 residents of the reservation stay safe in the pandemic and increase Navajo participation in the census before counting ends.

Each week, helpers stop at as many as eight of the 110 chapter houses across the reservation, which stretches 27,000 square miles across parts of Arizona, New Mexico and Utah. Chapters are the tribe’s local government entities.

“There’s no large gathering, especially here on the Navajo Nation,” Nez said. “So what’s the next best thing? These types of events. As they get their food, they stop – and they also get counted for the U.S. census.”

The Navajo Nation has had one of the highest per capita rates of COVID-19 cases in the U.S. – more than 10,000 to date and more than 550 deaths. The tribe has enacted strict mask restrictions, stay-at-home orders and 57-hour weekend lockdowns.

CARES Act dollars have paid for relief supplies such as those distributed at the Many Farms chapter house, as well as personal protective equipment and front-line worker pay. The money also is going to projects that address longstanding problems on the reservation, such as limited access to clean water, electricity and broadband internet connections.

Tribal officials noted that being undercounted in the census could cause issues that have plagued their community to drag on – or even worsen.

“My people are left behind,” said Katherine Arthur, president of Many Farms Chapter.

“My people are scattered all over the place,” she said. “They don’t have running water in their homes. We need education. We don’t have telecommunication where the students are going to school. We don’t have resources. We need funding to finance those kinds of services for my people so that we can at least come an inch up.”

As of Sept. 23, the census self-response rate on the Navajo Nation was about 20%. In contrast, the state of Arizona has a rate of about 63%.

Across the U.S., census efforts have taken a hit because of COVID-19 precautions. Then last month, U.S. Census Bureau Director Steven Dillingham announced that field data collection would end Sept. 30, a month earlier than the previous Oct. 31 deadline. The Constitution requires a headcount every 10 years to determine representation in Congress and allocation of resources, such as funding for public infrastructure, schools and social programs.

The Navajo Nation joined a lawsuit alleging the bureau’s “rush plan” set an unattainable goal that would dangerously undercount communities of color, and last week a federal judge issued an injunction barring the Trump administration from ending the count early.

Arbin Mitchell, left, is a tribal partnership specialist for the 2020 census. The COVD-19 pandemic has drastically reduced the number of census workers on the reservation, he says. (Photo by Daja E. Henry/Cronkite News)

Arnold Silversmith, a Navajo police officer, waits to hand out food and personal protective equipment to families in the Rough Rock Chapter. The drive is part of the tribe's COVID-19 relief efforts. (Photo by Daja E. Henry/Cronkite News)

Volunteers unpack a trailer full of supplies purchased with some of the funding the Navajo Nation received from the CARES Act, which Congress passed last spring. (Photo by Daja E. Henry/Cronkite News)

Four former Census Bureau directors have warned that an earlier deadline would result in an underrepresentation of hard-to-count populations, including Native Americans in rural areas. They’re pushing for an extension to April 30, 2021, saying the U.S. otherwise will see “seriously incomplete enumerations in many areas across our country.”

For those who do not self-respond, follow-up efforts include going door to door. Navajo officials said that worked well in the past with residents who have no phones or internet connectivity.

So far, about 31% of responses nationwide have come from such efforts.

Workers still go door to door, he said, but leave packets hanging from door knobs. Without Navajo census workers sitting with them and translating the forms, Navajo elders who are not proficient in English will be unable to complete the census, Nez added.

As of the 2010 census, some 7,600 tribal residents spoke only Diné, the Navajo language.

Jay R. Nez, vice president of the Rough Rock Chapter, said he had not participated in a census before. He said he’d waited for 2010 census workers to come to his home, but he travels a lot for work, so he was not counted. He planned to take part this year. 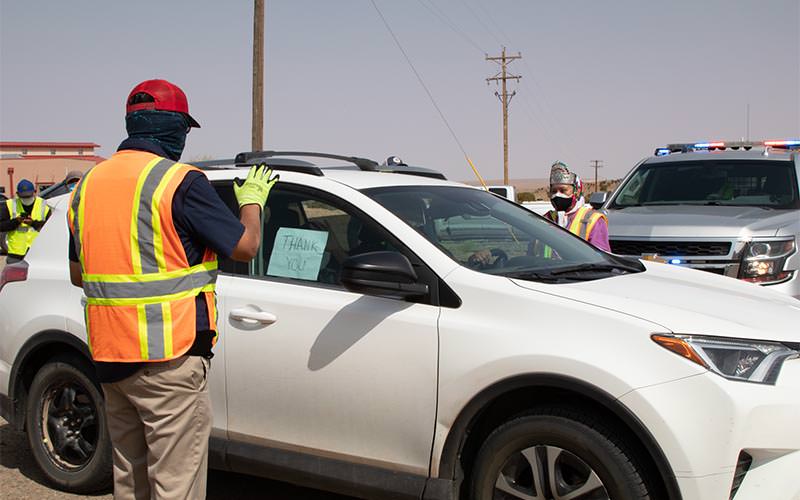 Navajo Nation President Jonathan Nez and Shaandiin Parrish, Miss Navajo Nation, greet a Many Farms family receiving food and supplies and the opportunity to be counted in the 2020 census. (Photo by Daja E. Henry/Cronkite News)

Technological advancements have made it much easier, he noted, allowing people to fill out the form online. But those who do not have internet access still rely on in-person contact or phone calls and, according to Census Bureau data, only about a quarter of homes on the Navajo Nation Reservation had broadband internet access in 2018.

“The 2020 census is an opportunity for our people to directly impact history,” said Shaandiin Parrish, Miss Navajo Nation.

At Many Farms, the third and final stop of the day during the combined COVID relief and census effort, at least 100 cars passed through the line. At an event the previous week in Gallup, New Mexico, Mitchell said more than 400 families responded to the census. Several more events are scheduled.

Nez said he knows full well that the census is not the remedy to dealing with COVID-19 or to other problems facing the Navajo Nation.

Still, he said: “You always have to have some hope in the system. Not every system is equitable, but we’re doing our very best to work with the system that is here that is put in place.

“That is why the Navajo Nation, and I’m sure many others throughout the country, are mobilizing and getting their citizens to self-respond and to be counted. … I truly believe that with this type of outreach, we’ll get a good number of people that turn out.”