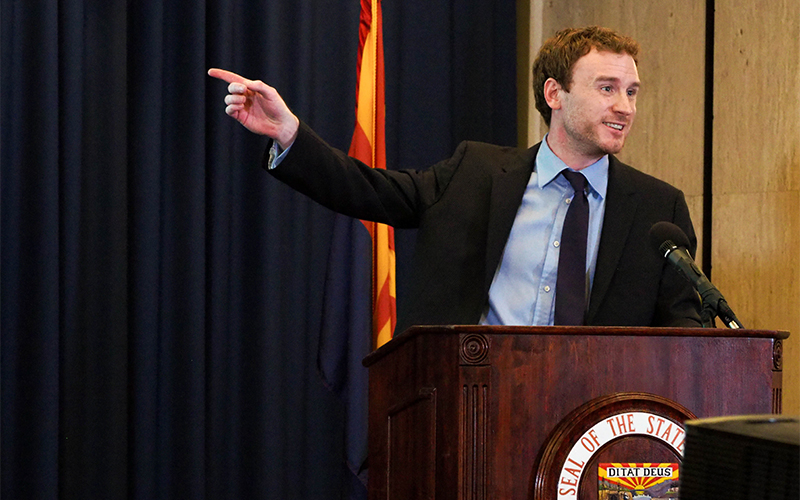 PHOENIX – Gov. Doug Ducey on Friday proposed a fiscal year 2020 budget that would double the rainy day fund to $1 billion, put aside $165 million to hike teacher salaries and battle drought.

1. Ducey wants to save for a rainy day.

Ducey aides said a $1 billion contingency fund – twice as much as the $450 million set aside for the previous fiscal year – could mean the state avoids the fate of the 2008 recession.

“The governor has no interest in repeating the mistakes of the past,” said Glenn Farley, Ducey’s chief economist. “When the revenues evaporated during the Great Recession, there was no flexibility for the general fund to rapidly respond, and it created a sort of catastrophic fiscal condition for the state,” he said.

2. Ducey said teachers will get the salary hike he promised in 2018.

The tailwinds of the statewide teacher walkouts last spring, the force that became Red for Ed, are still at work. The governor proposed $637 million for K-12 education, including $165 million to raise teacher pay by 20 percent by 2020.

He would set aside $68 million for additional assistance, such as textbooks, curriculum and technology. Ducey also wants to continue financing schools based on academic performance, with $60 million for schools distributed based on schools’ A-F letter grade.

Other items include $16 million for school safety, including mental and behavioral health services, along with school resource officers.

Conservation efforts dedicated to protecting water levels in Lake Mead would cost the state an additional $30 million this budget year under Ducey’s proposal.

“Here’s the bottom line: We’re in a 19-year drought,” Ducey said during his state of the state speech Monday. “It’s going to get worse before it gets better. Arizona and our neighboring states draw more water from the Colorado River than Mother Nature puts back.”

Editor’s note: An earlier version of this story misidentified the chief economist for the governor’s office. His name is Glenn Farley.