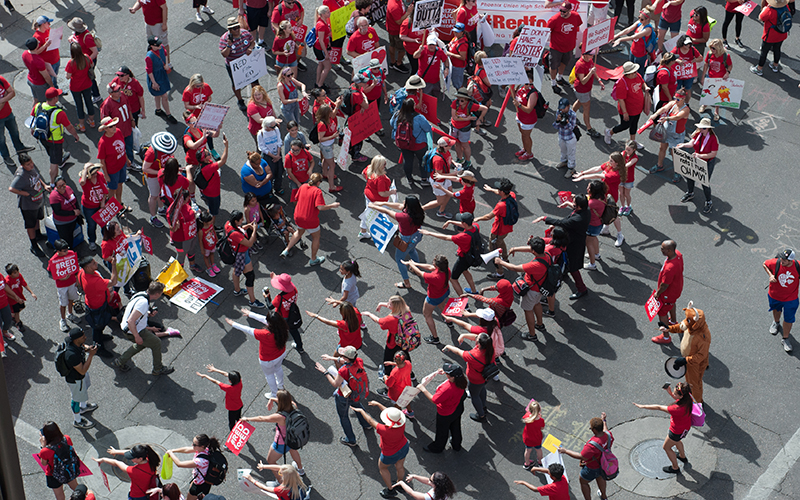 Before Thursday’s march to the Capitol began, adults and kids alike danced the Macarena and tried to find shade near Chase Field. (Photo by Jesse Stawnyczy/Cronkite News)

Red For Ed protestes support a specific set of changes for education funding, including an extension of salary increases to support staff, and a freeze on future tax cuts until per-pupil funding matches the national average. (Photo by Jesse Stawnyczy/Cronkite News)

PHOENIX – Legislators and Gov. Doug Ducey have reached a compromise on a state budget that would provide a 20 percent pay raise to teachers and $371 million in additional funding for support staff over five years, Ducey announced Friday.

Ducey’s announcement, which did not specify how the state would raise money for the increases, came near the end of the second day of Red for Ed protests. Educators across the state walked out Thursday, shutting down three-quarters of Arizona’s school districts and charter schools.

“Earlier this month, we stood shoulder to shoulder, in unity with the education community, to announce a plan for a 20 percent increase in teacher pay by school year 2020,” Ducey said in a statement. “Today, we are pleased to announce that this plan is a reality. Arizona is delivering on its commitment to our students and teachers.”

The governor had said he would not offer a better deal to educators than his “20 by 2020” plan, but on Friday said the agreement would restore prerecession education funding.

• #RedForEd: What’s about to happen when teachers walk out
• Ducey proposes 20% raise for teachers by 2020; Arizonans voice opinions on #RedForEd

“We are also restoring recession-era cuts to increase funding for schools and putting more money into the classroom – flexible dollars for superintendents to use for support staff pay increases, update antiquated curriculum and improve school infrastructure – without raising taxes.”

Lawmakers agreed to the proposal hours after media reports that education advocates filed a ballot initiative to raise the income tax on high wage earners to fund public education. The initiative, called the Invest In Education Act, would raise the income tax rate by 3.46 percent on individuals making more than $250,000 or household incomes higher than $500,000. 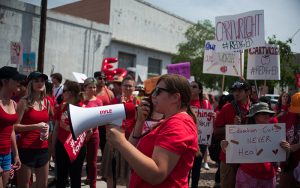 Red for Ed leaders indicated Friday they were willing to continue the walkout – effectively a strike – until all their demands are met.

The movement’s organizers put out specific demands ahead of the walkout, including a 20-percent salary increase, restoration of education funding to 2008 levels, extension of salary increases to support staff, development of a permanent structure for annual raises and a freeze on future tax cuts until per-pupil funding matches the national average.

It is unclear whether the budget would appease the striking educators. Organizers have been vague about what specific moves would end the walkout.

“You can look around and see there is a lot of dedication to this cause and you can see there are a lot of teachers who are willing to do whatever it takes to fight for their students,” said Noah Karvelis, a Littleton Elementary music teacher and a leader of Arizona’s Red for Ed movement.

Under the deal Ducey made with Speaker of the House J.D. Mesnard and other lawmakers, teachers would get a 20 percent pay raise by 2020, in a permanent raise that would adjust for inflation in the future. He said the budget also includes $100 million more in funding for support staff, and a promise to increase that number to $371 million over the next five years.

A tweet from Ducey indicated there would be no new taxes to pay for extra funds, despite lawmakers arguing that his “20 by 2020” proposal, which relies on economic growth to pay for raises, was optimistic. 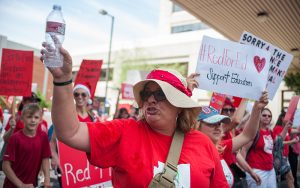 Ducey said more details of the budget would be hashed out over the weekend, and the document would be introduced in the Legislature early next week.

About 40,000 educators and supporters gathered Thursday at the Capitol on the first day of the walkout, with numbers dropping to 4,000 at Friday’s rally.

Red for Ed, a grassroots movement led by Arizona Educators United, is part of a national protest by teachers and education advocates over low salaries. Educators in West Virginia, Kentucky and Oklahoma have seen success after similar strikes by educators.