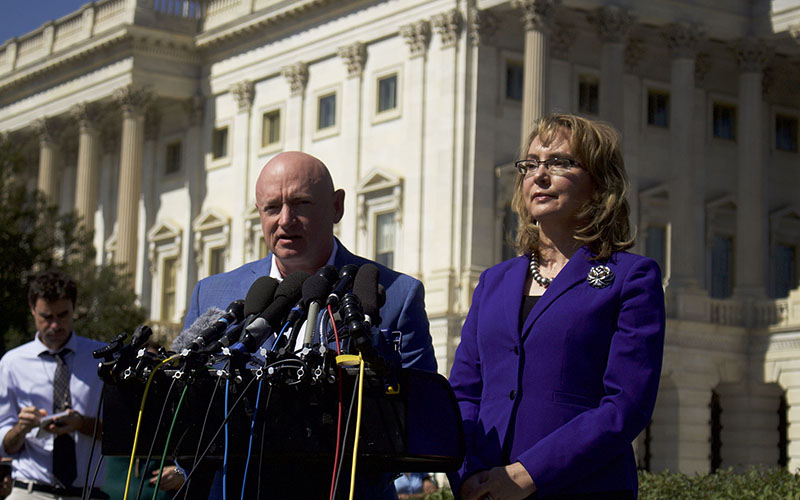 Mark Kelly and his wife, former Arizona Rep. Gabrielle Giffords, at the Capitol where they called on Congress to act on gun control in the wake of the Las Vegas shooting. (Photo by Andrew Nicla/Cronkite News)

WASHINGTON – Former Arizona Rep. Gabrielle Giffords turned and shook her fist toward the Capitol Monday after telling lawmakers “the nation is counting on you” to act in the wake of Sunday’s mass shooting in Las Vegas.

Giffords, the victim of a 2011 mass shooting in Tucson, was joined at the Capitol by her husband, Mark Kelly, who said elected officials’ offers of thoughts and prayers for families of the victims “are not enough.”

But in the hours after the shooting, most of official Washington, including most of Arizona’s congressional delegation, was offering condolences while holding off on calls for specific action.

The shooting occurred Sunday night when Stephen Paddock opened fire from his hotel window into a crowd attending a country music festival, killing at least 59 people and wounding 527, according to a statement Monday evening from the Las Vegas Metropolitan Police Department. It is the deadliest mass shooting in modern U.S. history.

President Donald Trump was quick to respond Monday morning, ordering flags flown at half-staff and holding a moment of silence in front of the White House for the victims and their families. In an address on the shooting, Trump condemned it as an “act of pure evil.”

“In moments of tragedy and horror, America comes together as one and it always has,” Trump said. “And though we feel great anger at the senseless murder of our fellow citizens, it is our love that defines us today – and always will.”

Trump said he will travel to Las Vegas Wednesday to meet with law enforcement, first responders and families of the victims. He said the FBI and the Department of Homeland Security are working with Las Vegas police on the investigation.

Arizona lawmakers were quick to condemn the “horrific tragedy” and to extend condolences to victims and their families.

My first read of the day. My heart goes out to each and every person and family affected by this horrific tragedy. https://t.co/BTUHLh85r2

“I am following the details of the horrific shooting that happened in Las Vegas,” Rep. Trent Franks, R-Glendale, said in a tweet Monday. “My heart breaks as I pray for victims and their families.”

Sen. John McCain, R-Arizona, expressed his sympathy for the victims and applauded the “bravery of all first responders,” while fellow Arizona Republican Sen. Jeff Flake extended condolences for what he called an “awful scene.”

“Awful, awful scene in Las Vegas,” Flake said in a tweet Monday morning. “My heart goes out to the victims and their families.”

White House Press Secretary Sarah Sanders, holding back tears in a press briefing Monday, commended those concertgoers who risked their lives to protect people they had never met, saying that “says far more about who we are as Americans than the cowardly acts of a killer ever could.” But, in response to a reporter’s question, Sanders also said that Monday was too soon to talk about gun-control or other issues in response to the shooting.

“There’s a time and a place for a political debate, but now is the time to unite as a country,” she said.

Rep. Raul Grijalva, D-Tucson, grieved the loss of life, but added that “words alone are not enough to heal these wounds.”

He singled out the Sportsmen’s Heritage and Recreational Enhancement Act – or SHARE – Act, which supporters say is about hunters’ rights. But critics call it little more than a vehicle to ease restrictions on purchasing silencers and armor-piercing bullets, and letting people carry concealed weapons in any state.

In a statement later Monday on the shooting, Grijalva and the Congressional Progressive Caucus called the SHARE Act “nothing more than a callous NRA (National Rifle Association) lobbyist effort to promote silencers and armor-piercing bullets.”

At the Capitol, Kelly pointed to the silencer provision of the SHARE Act as the sort of “bad legislation” that must be stopped – and called on lawmakers to do more than just stop the bad bills.

“We can’t just be working to defeat bad legislation like federally mandated concealed-carry and the deregulation of silencers,” Kelly said. “Imagine how much worse last night’s shooting would have been if the gunman had a silencer.”

He urged Congress to create a committee to investigate gun violence, draft bipartisan legislation requiring background checks for all gun sales and to further regulate sales of assault rifles. He called the Las Vegas shooting an incident of “domestic terrorism,” and said that Congress and the president are in a position to tackle the issue of gun control once and for all.

“We can accept gun violence as simply the cost of living in America, or we can choose courage,” Kelly said. “We can reject the idea that this is inevitable. We can demand that the leaders we elect to go to work … don’t have the option to say that this is just too hard.”

The weapons used in Las Vegas are designed to do a massive amount of damage. Prayer alone can’t stop that. Only Congress can help stop it.

Giffords – who still struggles to speak as a result of the 2011 shooting that killed six and left her and 12 others wounded – had few words to say at the Capitol event.

But in a statement released before the event by Americans for Responsible Solutions, which she founded with Kelly, Giffords said the “massacre in Las Vegas is a grave tragedy for our nation. This must stop – we must stop this.”

She pleaded to her former colleagues in the statement to take action on an issue that has affected countless lives – including hers.

“I know they got into politics for the same reason I did – to make a difference, to get things done,” Giffords’ statement said. “Now is the time to take positive action to keep America safer. Do not wait. The nation is counting on you.”