PHOENIX – Arizonans showed up in droves Monday to donate blood to help the victims of the Las Vegas shooting, and officials said the American Red Cross and United Blood Services collectively sent hundreds of “blood products” to help those injured.

The interest in donating became so intense, people at one Red Cross bloodmobile in the Valley were turned away.

Residents flocked to a Lowe’s parking lot in north Phoenix the day after the news that more than 50 people were killed and more than 500 injured during a Sunday night mass shooting at country artist Jason Aldean’s concert on the Las Vegas strip.

Phx can support Las Vegas by donating blood to replenish @ubsaz supplies. Make an appointment at 877-827-4376 or https://t.co/onYo1AZCix? pic.twitter.com/VFUVhAaMR2

Potential blood donor Allie Clark said she was annoyed she could not donate blood Monday, especially because of her rare blood type, Type O negative.

“I did look online to see where I could donate, and I actually thought there could possibly be a flood of people (at the bloodmobile) today,” Clark said. “I feel like because we are in such close proximity to Vegas, that these organizations should have stepped it up today.” 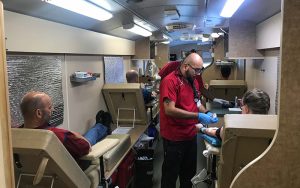 Haylee Finn, another donor turned away at the bloodmobile, said she made more than 40 calls to the Arizona Red Cross and United Blood Services Arizona trying to find a location so she could donate blood. Finn wanted to donate because she saw firsthand the aftermath of the Orlando nightclub shooting in 2016.

“I was actually in Orlando when the Pulse shooting happened, and I couldn’t donate because I was sick,” she said. “I feel like now I need to do it because at that point I couldn’t, and it still hurts me to this day, a year and six months later. It still sucks that I couldn’t do that last year, and I have the opportunity now to do it, and I want to do it. I need to do it.”

United Blood Services Arizona spokeswoman Sue Thew said they have received an influx of calls to donate and received more than 1,000 voicemails. The organization sent about 200 “blood products” to the area, she said.

“People need to keep in mind the shelf life of blood,” Thew said. “We are grateful for the donations, but we want to collect blood based on the need. We can’t donate all of this blood in just one day.”

Thew suggested those wanting to donate should “donate frequently and regularly” to keep shelves stocked at all times in case of incidents like this.

A news release from the Red Cross suggested people make appointments to give blood in the coming weeks and months to “help ensure a sufficient blood supply.” They suggest using the Red Cross app, visiting the website www.redcrossblood.org or calling 1-800-RED CROSS.

“This is something I can do to help out,” Davila said. “Whether or not it goes to someone there, or someone else in need, I know it’s very important to give blood.”

Because of the insurgence of donors, United Blood Services Arizona opened doors to four donation centers in the Valley typically closed on Mondays.

What is your connection to the Las Vegas shooting?

“Folks only want to help when it’s a national disaster,” Thew said. “Keep in mind, tragedy strikes without notice, and it’s the blood on the shelves that really matters.”

People in the Las Vegas area also are encouraged to donate blood to participating hospitals and clinics or simply donate funds, according to an article in Business Insider. 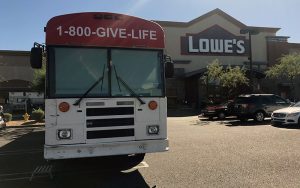 The American Red Cross on Monday turned away potential donors from its bloodmobile in north Phoenix because it was at capacity. (Photo by Maddy Ryan/Cronkite News)

Nick Bembeneck, a Las Vegas resident and former student at the University of Arizona, said he went to give blood in Las Vegas. He said the line was “five people wide” and wrapped around the building and down the street for half a mile.

“There is an eight-hour wait, and supplies (are) being dropped off in truckloads,” he said via Facebook message. “Now we are being asked to schedule with (United Blood Services), but the next appointment I see is eight days from now.”

“But I’m proud of how much support the Vegas community has been showing. Everyone is looking for some way to help.”