The shooting, which left more than 50 people dead and more than 500 injured, came from a hotel room on the 32nd floor looking over the country music festival.

Scottsdale-based live event safety and security expert Steven Adelman said Monday there were “lots of people in a confined space, and there’s someplace else that has relatively light security nearby.”

Officials and organizers for some of Arizona’s largest event venues said security is always a priority, and they’re working to take precautions.

On Wednesday, the Arizona Diamondbacks host the Colorado Rockies in the National League Wild Card game at Chase Field. The game is sold out, with more than 48,000 fans expected to attend.

In a statement to Cronkite News, the team said it is constantly evaluating security measures for the Wild Card game as well as any subsequent Major League Baseball playoff games that could take place in the coming weeks if the Diamondbacks win Wednesday.

“While we are unable to give specifics on our plan for security purposes, our fans can rest assured that we have been in touch with local, state and federal law enforcement for more than a month leading up to the postseason,” the statement said. “And we will continue to monitor world events and adjust as necessary.”

“I mean, last week we had some run-throughs on different scenarios for the arena,” he said. “It’s a real tragedy, you know. If someone is going to set up in a hotel room 33 stories up, it’s tough to stop that. But we work at trying to make sure our venues are safe all year round. That’s why when you go to the buildings a lot of times you have to go through a metal detector, things like that to make sure we’ve got a safe environment.”

Organizers of the Lost Lake Festival expect tens of thousands of music fans to converge at Steele Indian School Park in Phoenix on Oct. 20-22. Superfly, the minds behind the Bonnaroo Music and Arts Festival and Outside Lands Music Festival, planned the three-day, multi-stage festival that will feature more than 40 artists.

But it’s unclear if or how officials will adjust security strategies in light of Sunday’s shooting.

Spokeswoman Amber Schlaefer would not provide details about what kind of security they planned for the event, but she said in an emailed statement they will continue to “work closely with Phoenix law enforcement officials to assess our safest and security protocols to ensure we host the safest event possible.” 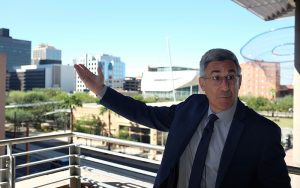 Adelman said security officials can control events within a venue, but they can’t necessarily monitor everything outside. It’s often a balance between security and privacy or convenience.

Adelman called the event a “black swan,” in the sense that these kinds of events tend to be looked at in retrospect to figure out what went wrong, often when nothing really could have been done.

“Nobody didn’t do their job,” he said.

Frank Casillas, one of the organizers of the Rude 66 festival in Kingman, said they will take extra safety measures for the Oct. 14 festival. They will have security posted at all entry and exit points and plan for local police to monitor the festival as well. The event doesn’t allow weapons, and security will search bags and backpacks before people enter.

He noted, however, they expect a much smaller audience in comparison to other music festivals.

“It makes for easier crowd control, and security precautions, when you have more of a manageable crowd,” Casillas said in a statement. “Also, the surroundings and parameter of our venue are very open, and there are no buildings, or high-rise places where an outside sniper can easily hide.”

“Other than that, I really don’t know what much else we can do to prevent a situation like what happened in Las Vegas,” he said.