It’s an ache that Plummer and many other former and current NFL players have managed for years with the use of potentially addictive pain medications like codeine and oxycodone. Now, Plummer says he’s found a better way to manage his ailments.

And he believes other current and former athletes can benefit in the same way from cannabidiol, better known as CBD, an extract from hemp plants that contain only minute levels of the psychoactive chemical THC.

“Things had been bothering me for a few years that I couldn’t get to go away, mainly in some of my joints, my back, shoulder,” said Plummer, who starred at Arizona State before playing 10 seasons with the Buccaneers, Cardinals and Broncos. “That winter after taking CBD through most of the summer and the fall, real consistently, I felt great. I didn’t have those little days of waking up stiff and sore and that’s when I became a true believer.

“I knew this was something that I had to get behind.”

Former NFL player Jake Plummer says players should have the right to use marijuana if it helps them with pain management. (Photo by Giselle Cancio/Cronkite News)

CBD is a compound found in the hemp plant which reduces inflammation and chronic pain without psychoactive effects. Unlike marijuana, which contains high traces of tetrahydrocannabinol (THC), the cannabinoid that gives users a “stoned” feeling, hemp-based CBD contains a THC level of less than 0.3 percent. When it is made from industrial hemp, it can be shipped to all 50 states.

“It doesn’t mess with your head at all,” said Dr. David Tonkin, anesthesiologist and pain management specialist. “It can’t be addicting and you can’t overdose on it. So here with CBD, we have neuroprotective properties.”

A previous version of this story misstated the amount of THC, the chemical in marijuana that causes a “high,” in hemp-derived cannabidiols. CBDs contain minute levels of THC, but not enough to produce any psychoactive effects, or highs. The story has been corrected, but clients who used earlier versions are asked to run the correction that can be found here.

Proponents say it scientifically acts as a helmet for the brain during injuries. However, there has been little research that details CBD’s effectiveness. The federal government classifies marijuana as a Schedule 1 drug, similar to heroin and ecstasy, making it difficult for federally-funded research to be conducted.

Pot is now legal recreationally or medicinally in more than half of the country. Just last month, voters in Nevada, Maine, Massachusetts and California voted to legalize the recreational sale of marijuana.

Though CBD is legal in the U.S., it’s off limits in the NFL, which includes marijuana on its list of banned substances on the league’s collective bargaining agreement and does not make an exception for CBD.

Plummer has become one of the leading advocates of retired players to speak out regarding the plant’s potential benefits.

“It’s grown into me kind of taking a stance against the NFL for marijuana use, but that’s really not what I’m about,” Plummer said. “I want people, whether they are football players or the average person on the street, to have access to a non-toxic, non-addictive, healthy, naturally occuring choice for pain.”

Plummer uses his platform to raise awareness about CBD through his work with the Realm of Caring. The nonprofit works directly with patients using the Charlotte’s Web CBD oil made by CW Hemp in Boulder, Colorado. 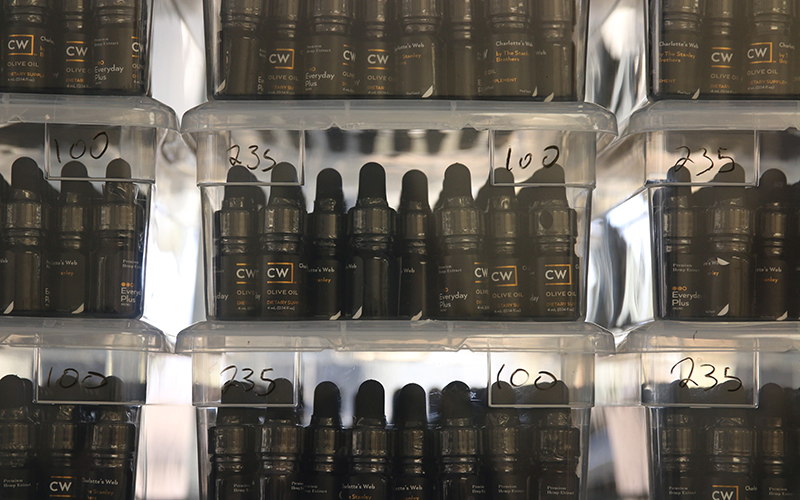 The oil was created for Charlotte Figi, a young girl who was diagnosed with Dravet syndrome, a rare form of epilepsy, at only 3 months old. By age 5, she suffered 200 to 300 seizures per week and after only two years of treatment, Charlotte’s seizures decreased by 99 percent.

“He has sustained numerous injuries through his football career and he actually started taking our product and felt relief from a number of ailments,” said Vijay Bachus, CW Hemp’s director of product operations. “We decided to figure out what’s really going on here. What can you do ahead of time versus when you’ve already had the trauma?” 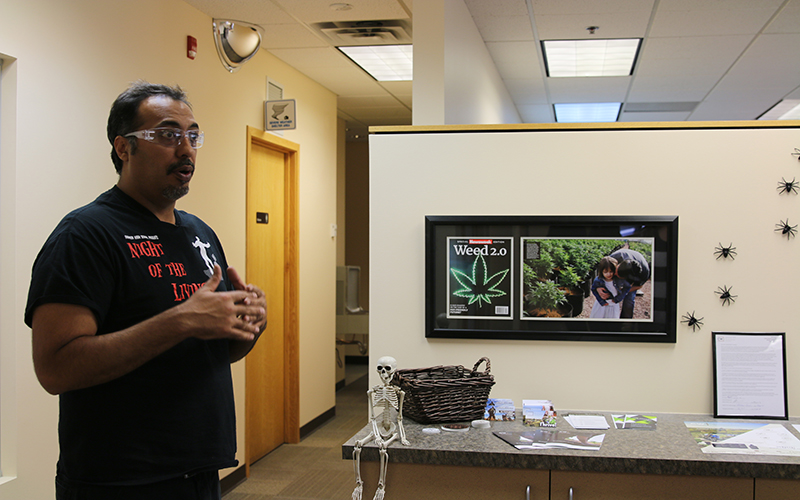 Vijay Bachus, CW Hemp’s director of operations, talks about how the Stanley brothers developed the Charlotte’s Web CBD oil for Charlotte Figi, a young girl who suffered over 300 seizures per day. (Photo by Lindsey Wisniewski/Cronkite News)

CW Hemp teamed with John Hopkins University to research the effects of CBD on those who suffer from chronic traumatic encephalopathy (CTE), a degenerative brain disease linked to concussions and hard hits. Plummer and other NFL players like Eugene Monroe and Kyle Turley advocated for the research.

NFL veteran Marvin Washington is among former players involved in a class-action suit against the NFL that claims the league did not properly warn players of the effects of CTE. He also believes CBD could serve as alternative treatment for some symptoms of CTE.

Washington, who played for the Jets, Broncos and 49ers during his 11-year NFL stint, has a CBD sports performance line through Isodiol. He speaks at cannabis conferences across the country to educate others about the issue of concussions in the NFL.

The league rolled out stricter concussion safety measures in 2013.

“My biggest issue with the concussion protocol is the same thing we had 20 years ago, 25 years ago; it’s rest, get in a dark room and no physical activity,” Washington said. “Why not give them CBD before the game, at the point of contact and especially afterwards to see if they can accelerate and get the player back on the field without sitting out for three or four weeks?”

Washington said the “best ability in the NFL is availability” and he believes CBD could help keep players who too often depend on painkillers on the field.

A need for a change

Plummer and Washington believe the NFL should lead the science on marijuana as an alternative to opioids.

“If the NFL can get behind it, it can really move the needle in society,” Washington said. “And I believe they have to because if they want to continue to be the number one sport in the country, they can’t have this safety issue. And I believe one of their safety issues can be solved through the cannabis plant.”

Washington feels if advocates can get more current and former players to press on the issue of safety, the NFL will loosen its guidelines and open up to testing CBD as an option for players.

NFL spokesman Brian McCarthy says the league will continue to follow the advice of leading experts on treatment, pain management and other symptoms associated with concussions and other injuries.

“Medical experts have not recommended making a change or revisiting our collectively bargained policy and approach related to marijuana,” McCarthy said. “Our position remains consistent with federal law and workplace policies across the country. If they changed their views, we would explore possible changes.”

Plummer believes if marijuana or CBD was offered when he played, it could have extended his career.

“I’d love to have been able to go back and find out,” Plummer said. “I think that part of the reason I retired was to stop having to take anti-inflammatories every day. I was aware of the damage they caused and I did not want to take any more and I couldn’t play without them. So if this would have been an option, I would have been all over it.”

Plummer hopes the NFL puts its players first and gives them an option of using a potentially safer method for pain management, especially if it saves lives.

But he doesn’t think players should have to wait until the drug policy in the current collective bargaining agreement expires.