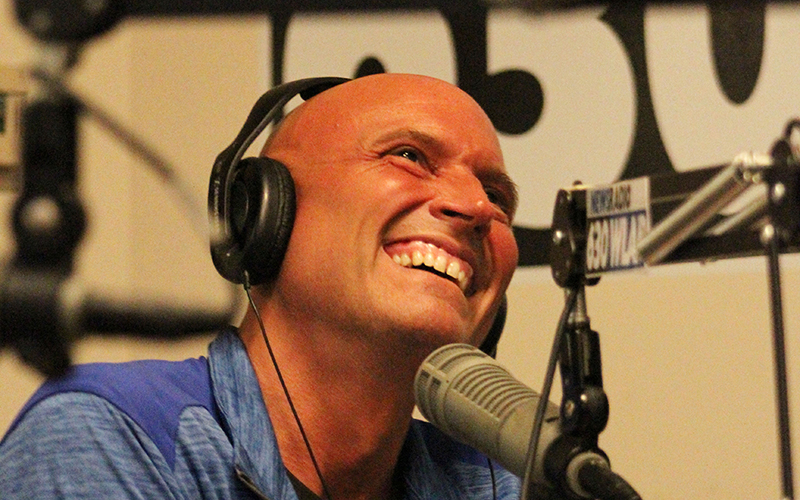 Rex Chapman is currently a color commentator for the University of Kentucky pre-game show on iHeart Radio in Lexington. (Photo by Trisha Garcia/Cronkite News)

Chapman said he had done just that on the day 15 years ago when he decided to enter rehab for an addiction to prescription opioids. At the time, he said he was taking up to 50 pills a day, between the OxyContin and Vicodin he was using.

“I was driving down this gravel road, when I felt myself short circuit,” Chapman said of the day in 2001 when he took his first trip to rehab. “Next thing I knew I was over in a ditch on the side of the road. I didn’t wreck, but to this day I don’t know if I was out for five seconds or five minutes, but I don’t think it was any longer than that.”

The Sierra Tucson rehabilitation and treatment center was less than 100 yards away.

“I remember coming to and thinking, ‘I’ve gotta get in here, or I’m gonna die,’ ” Chapman said.

Chapman, 49, was an All-American basketball player for the University of Kentucky from 1986 to 1988. The Charlotte Hornets drafted him with the eighth overall pick, the beginning of a 12-year NBA career that also included stops with the Suns, Washington Bullets and Miami Heat.

Chapman’s time in the NBA was plagued by injury. With each injury came more pills, and ultimately, a post-career dependency on prescription opioids.

His first stint in rehab came about two years after he retired from the NBA. He stayed clean for approximately three months, he said.

“The day I went to rehab, my tolerance had been built up, so I was already taking nine to 10 OxyContin and 40 Vicodin a day,” he said. “If I woke up this morning and tried to do that, I’d die. For sure.”

On Nov. 29, Chapman sat down with Cronkite Sports at Memorial Coliseum in Lexington, Kentucky, to discuss a wide-range of topics, from his basketball career to his battle with opioid addiction. The following includes quotes from that interview, edited for length and repetition.

During his 12 NBA seasons, Chapman’s body was riddled with injuries. He has said he underwent 10 surgeries – seven came during the final four years of his career when he was with the Suns. It was during his first season in Phoenix that he began using painkillers because of a foot injury. He entered rehab for the first time after retiring following the 1999-00 season.

“For me, it was injuries,” Chapman said. “I signed my last contract with Phoenix for six years and they knew I was probably only going to play two or three. I made the decision sometime during my fourth year that I wasn’t going to play anymore after that.

“The last few years it was very typical to come in sometime in the morning during shootaround and have treatment. Then, I’d go through shootaround, treat after shootaround, come back pregame, treat again. I’d play, or try to play and then treat again after the game. Then, you treat with the trainers on the airplane and in the hotels during away games.

“It became my routine, but it was chipping away at some of the fun I had playing the game.

“After every surgery, you’re given pain medication and then it’s up to you whether you take it or not, or how much you take.

“I’d never taken (pills), until after my last surgery. I’d always wanted to know how bad my body was hurting so I’d know when I could get back to playing.

“I started taking Vicodin in my third to fourth last season for the nerve in my foot. Before I knew it, I was taking a couple. One, maybe, before a game. One after a game, but nothing regularly.

“A good buddy of mine in Phoenix, he warned me. He said, ‘Don’t do this. In a few years you’ll be drooling.’ But, at that point, I was young, I was 30-years-old, an athlete, running up and down the court; you’re invincible.

“I was awfully hard-headed though.

“I wanted the medicine.

“It (using painkillers) takes a terrible toll on your body, but I liked it. Yes, it helped me physically, but it also helped me socially. I felt that the opiates made me more social, where I once had anxiety, it made me feel, in my mind, more normal.”

Chapman’s periodic use of Vicodin to treat pain turned into a regular, overuse of the drug. He later added OxyContin, then replaced those two substances with Suboxone. The latter is a partial opioid, a derivative used to help addicts wean themselves off of opioids.

“By the end of my career, I was moderately taking Vicodin,” Chapman said. “But I was playing a lot less and many times, not playing at all.

“My very last surgery was for my appendix. I had an emergency appendectomy during my last season and never played again after that. I had already decided to retire.

“I was prescribed OxyContin for the pain (after the appendectomy). I can pretty much say from the first time I took my first OxyContin, I was in love with it. In my mind, this is a bad drug that should only be given to terminally ill patients.

“It’s a monster of a drug. It had a hook in me from the first time I took it.

“Looking back, I didn’t need it for the pain after the appendectomy, not the physical pain, but I needed it for my emotional pain. The social anxiety, the pain of retiring from basketball, a sport I had played since I was a kid. I was in a difficult, at the time, marriage; mainly because she was living with a drug addict. It was a year and a half to two years of being a terrible father and a terrible person.

“There came a point where I wasn’t determining anymore when to take the medicine, the medicine was determining for me. I was actually having to wake up in the middle of the night. The withdrawal would wake me up and I would go into the bathroom, take another pill or two, water, back to sleep.

“Opiates and pain medications, they just have a way of maneuvering inside of you and you get lost. Fortunately, I tried to go somewhere and get help and it did help for a short time.

“I was there for a month at Sierra Tucson in Arizona and it went fine, I got out, was not on pain medicine. But, I had a sort of withdrawal feeling.

“Every time I would get off of opiates, my stomach hurt. I thought it was withdrawal. I still had some Vicodin, so I took it and like that I was back on Vicodin. I never went back on OxyContin, I think I realized it would kill me. For whatever reason, I didn’t believe that about the Vicodin.

“Like most addicts, you come to a realization, regularly, that you need to stop. The stopping is easy. It’s the starting up again in an hour that was also easy.

“So, I started taking the Vicodin again and within a period of months, I knew once again I couldn’t control it so I went to a detox place in California for a week. I was probably clean for about six months.

“Once I had started pain medicine, it was a struggle to stay off of it. I went through detox three times. I went to two full-blown rehabs.

“In detox, they hooked me up to IV’s, flushed my system. I got off the medicine, again. But, after I came back to Arizona, I met with a doctor who specialized in pain management and he prescribed Suboxone.

Chapman used Suboxone twice a day for 10 years to battle stomach pain, thought to be withdrawal symptoms, and for arthritis. He became addicted to Suboxone, the very drug that he said he had been given to help break him of his opioid dependence.

“The doctor told me it would help with my withdrawal, they said it could also be used for pain.

“The thing with Suboxone, it was so subtle to me. I never felt high.

“The one tip-off is that I started to feel sick when I had gone for more than 12 hours without the Suboxone under my tongue, so I think I did know, but was either too far gone into the addiction to do anything about it, or didn’t care.

“But, I was also losing time, or blacking out for a while before my arrest in Scottsdale, Arizona.

“I just remember coming out of my house one day to go pick up my daughters from school and a big swarm of cars came. They took me to jail and I had no idea why I was in jail.”

Chapman was arrested in September of 2014 after security cameras from a Scottsdale Apple Store revealed him putting products into a bag and leaving without paying. He was charged with nine counts of organized retail theft and five counts of trafficking in stolen property for selling the stolen items, worth $14,000, to a pawn shop for $5,460.

He would subsequently make his second visit to rehab less than a week later, and was in sentenced in March 2016 to 18 months of supervised probation.

“I remember being angry, but looking back I was just angry at myself,” Chapman said. “I was sitting in jail and thinking, ‘What’s happened to you? What are you doing?'”

“Everyone has their bottom, mine was the arrest. It was humbling. It was humiliating, not for me, but for my children and that still just eats at me.

“A week or so later, I was able to get into rehab at the Brook Hospital in Louisville, Kentucky.

“When I got into rehab, I was told a lot of addicts in there, who are addicted to heroin, would melt Suboxone down, put it in a syringe and shoot it. They said it gives you a high like heroin and I had no idea.

“I got off the opiates and felt like I was going to die, because the pain in my stomach was so bad. They did tests. It was ulcers.

“It took almost 15 years to find out that the pain came from ulcers that the opiates had caused.

“They gave me the ulcer medication in rehab and I’ve never ever had any desire to take another opiate.”

Earlier this year, Chapman was named co-host of the UK Radio Network’s basketball pregame show. He has been clean for two years, but he said his battle with addiction will continue.

“Someone asked me the other day, ‘Two years clean, so you’ve got this licked right?’ ” Chapman said.

“I feel like I do, but I’ve been through it so many times and for so long that I’m not going to be lulled into a false sense of security, because I’m always a surgery, or a decision, away from being that person again.

“I don’t want to be that person again.”