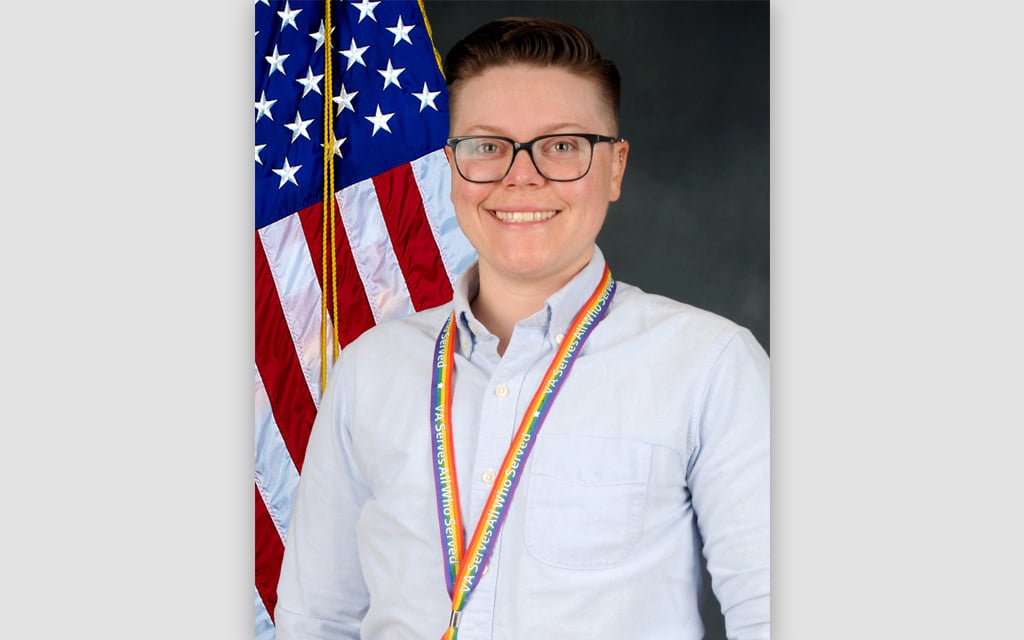 Ash Senter is the LGBTQ+ care coordinator at Phoenix’s Carl T. Hayden Veterans’ Administration Medical Center. Senter, who is transgender and nonbinary, is a former Air Force reservist and a health psychologist who started as the Phoenix coordinator in January – and they’re excited about the changes they’ve seen. “Visibility matters,” Senter says. (Photo courtesy of Public Affairs Office/Phoenix VA)

PHOENIX – The military has made strides toward inclusion of LGBTQ+ service members with the repeal of “don’t ask, don’t tell” and adaptation of new policies outlining appropriate standards of care for transgender, lesbian, gay and bisexual veterans.

There are an estimated 1 million LGBTQ+ vets in the U.S., many of whom are more likely to report chronic physical or mental health conditions. To address these disparities, the Veterans Health Administration in 2016 launched its LGBTQ+ Veteran Care Coordinator Program, requiring every VA health facility to appoint a staff member to the role.

Senter, who is transgender and nonbinary and uses they/them pronouns, is a former Air Force reservist and a health psychologist who started as the Phoenix coordinator in January – and they’re excited about the changes they’ve seen.

What is your military background, and why did you join?

In February 2014, I enlisted in the Air Force Reserves. … I was in undergrad getting my bachelor’s in psychology and sociology. Around that time, my brother had decided to enlist in the Marine Corps. That’s kind of where I found my path into military psychology and understanding a little bit more about the psychological process of being a military service member, being deployed and what all that entails.

I decided that maybe the military was a good option for me to kind of get some of that experience, as I was planning to become a military psychologist down the line. So I decided to enlist. … It was really great, stressful at times, but also a really great and rewarding experience.

Was your experience affected by your LGBTQ+ identity?

I entered in 2014, after the repeal of “don’t ask, don’t tell” (the policy that allowed LGBGT people to serve in the military so long as they didn’t openly acknowledge their sexual identity.) It didn’t really affect me in a negative way. I would say it was the exact same environment that I grew up in.

I was not out as trans or nonbinary during my military service – not at least openly. I was still kind of figuring that out for myself during that entire time. But I was out in terms of my relationships and my sexual identity. And that was completely open and accepting. I had served with a lot of other LGBTQ+ veterans that were out and open, so it was really comfortable.

Towards the end of my service period, I was exploring changing my legal name. In the military, you go by your last name, so it wasn’t really negatively affecting that.

When did the Veterans Health Administration add the LGBTQ+ care coordinator position?

At the VA as a whole, the program was implemented in 2016. And that came out of the National LGBTQ+ Health Program, which began in 2012. And then the VCC, the veteran care coordinator position, started to be implemented at all VAs in 2016.

What does it mean to you to be part of the evolution of LGBTQ+ inclusion at the VA?

I think for the LGBTQ+ community, especially the LGBTQ+ veteran community, that visibility matters. I don’t really know that it matters as much what I do at the VA, but I’m there, and other people can see me.

I started as a psychology extern at VAs in Chicago … and now I’m a staff member. Throughout that experience, I have noticed the impact that just being present has had on my colleagues, but also the veterans I meet with, especially the LGBTQ+ veterans.

I’m getting calls every week about people that are wanting to come to the VA and get their care here. Maybe they were here a few years ago, and then they went out to get care in the private sector and now they want to come back. I think that is a very positive impact that I’ve had.

What type of care do LGBTQ+ veterans need?

For LGBTQ+ people in general, we know that there are specific health care disparities that are experienced by this population. A lot of that has been linked in research to lack of engagement in health care because of discrimination, prejudice or unintentional bias that they’ve experienced in the health care system. I think in the VA, we also have to combat their military experience, as well. …

VA Phoenix provides hormone therapy and gender-affirming prosthetics. What’s been the response from your patients to such services?

Very positive for many folks, and I can speak to this as well, being a trans, nonbinary person. Gender-affirming health care can be quite expensive, especially if you don’t have insurance or you don’t have quality insurance that covers these types of services. I am fortunate enough to have good health insurance, and so I was able to get gender-affirming care relatively easily. 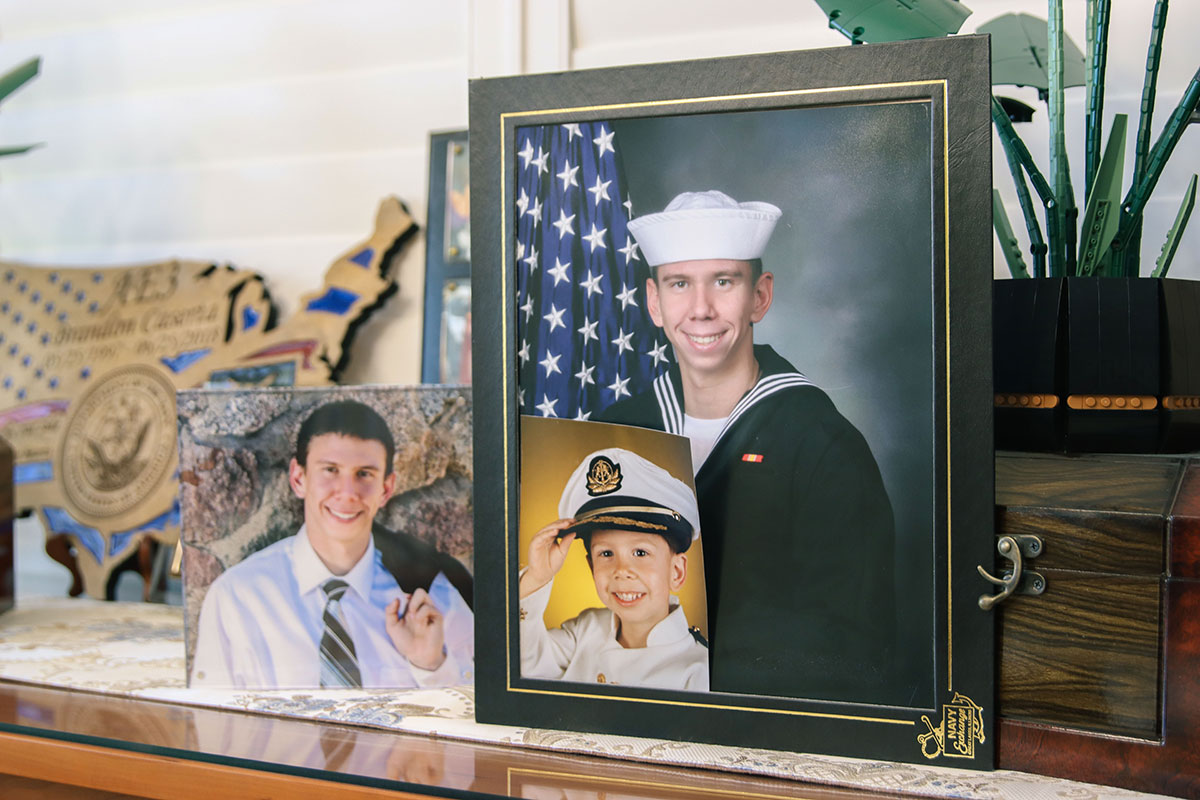 How prepared are other VA Phoenix providers to respond to the needs of LGBTQ+ veterans?

I also do a lot of classroom-based or telemeeting-type trainings on general basics and engaging with folks in health care – being able to provide an inclusive and affirming environment for health care, how to rephrase questioning to be more inclusive, how to provide appropriate sexual health assessment and screening that is inclusive and affirming. … They’re always really open and receptive to the information. There can be a lot of shock, like, “How did I not know a lot of this already?” But they are very much appreciative.

What’s next for your program?

We are looking to get a better idea of what our population looks like here in Phoenix, especially those that are enrolled in our VA, and continuing to grow and expand. … We are working on possibly adding some other programs to help folks get involved and engaged in their health care and their local veteran community.

Part of my role is doing community outreach and connecting with folks that may not be connected with the VA. For example, we were just out at Phoenix Pride for the Pride Festival … and we had a lot of engagement there.

Broadly speaking, the military has had a mixed history of engagement with the LGBTQ+ community. What steps has it taken to do better?

I can’t speak on behalf of what the military is doing. I can say what we are doing from the VA standpoint. If they were discharged under “don’t ask, don’t tell” or previous to “on’t ask, don’t tell” for any reason related to being LGBTQ+, they can submit for a discharge upgrade that can make them eligible for care that they would be otherwise ineligible for, especially for VHA health care. That also can be for burial benefits and things like that. Also, (there is) the expansion to benefits for spouses, families and survivors that was recently published by the health program.

You mentioned progress a few times. The LGBTQ+ community is very familiar with continuously overcoming. From my standpoint, and from the National Health Program standpoint, we are really trying to assist in any way that we can.