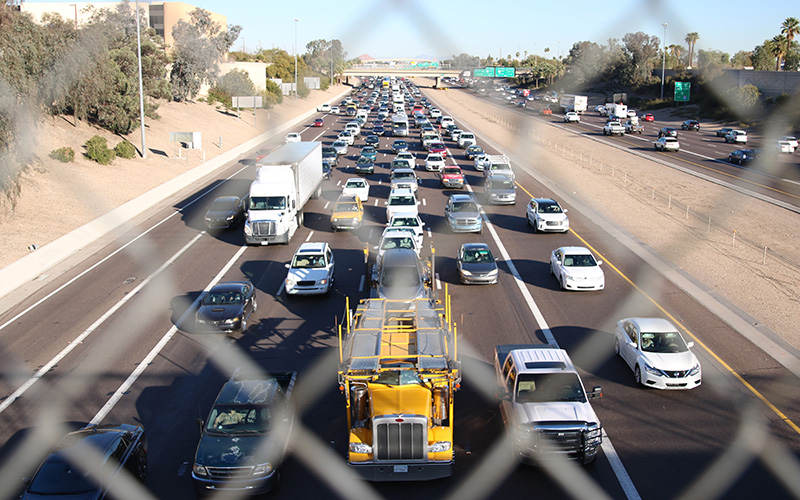 Rush hour traffic on Interstate 10 through Phoenix in a 2018 file photo. New data from the National Highway Traffic Safety Administration shows that the number of traffic fatalities in the first nine months of 2021 jumped sharply from previous years, both in Arizona and the U.S. as a whole. (File photo by Jessica Clark/ Cronkite News)

WASHINGTON – Arizona traffic deaths rose 18.4% in the first nine months of 2021 compared to the year before, far outpacing the national 12% increase in the same period, according to the latest numbers from the National Highway Traffic Safety Administration.

And while some of the increase could be blamed on a pandemic-related dip in driving in 2020, it’s not the only reason: Highway fatalities also rose when compared to the first nine months of 2019, increasing 19.9% in Arizona and 17.7% nationally for that two-year period.

Advocates and highway officials have ideas on what might be driving the increase, but no clear answers.

“Supposedly, there was less people driving … So, why more fatalities?” asked Alberto Gutier, the executive director of the Arizona Governor’s Office on Highway Safety, who called the increase from 2019 to 2020 “a very big surprise.”

NHTSA did not immediately respond to requests for comment on the data.

But Insurance Institute for Highway Safety President David Harkey said issues that had existed pre-COVID – excessive speeding, drunken driving and a lack of seatbelt usage – were worsened by the onset of the pandemic.

“We’re probably at about 90% of total vehicle miles travel-wise where we were pre-pandemic, but we have not seen the fatality numbers decrease,” Harkey said. “What appears to be happening is that those three issues … seem to still be present when you’re looking at the traffic safety picture.”

“Drinking at home, and then driving home from a friend’s or relative’s house versus thinking that they should … decide to ride” in a taxi or rideshare, Bustamante said.

Gutier attributed the 2019-2021 rise in deaths to behaviors like drug use, speeding and not paying attention while driving.

But he also noted that the state is seeing a population surge, which puts more drivers on the road in Arizona. Gutier said there are 400,000 more licensed drivers on Arizona roads today than in 2019.

“I’m not blaming only the pandemic, I’m blaming the fact that our growth continues … and people are being … more irresponsible in the way they drive,” Gutier said.

The NHTSA report came days after the U.S. Department of Transportation announced its National Roadway Safety Strategy, which outlines five objectives the department says are key to making roads safer.

The strategy promotes, among other things, stricter standards for road design and increased speed limit enforcement, both of which Gutier said Arizona is already doing. He emphasized that roadway construction standards and more patrolling can only do so much when the number of drivers in the state continues to rise.

“Our agencies are doing a fantastic job in doing the enforcement of highways but again, there’s more people, more vehicles and more irresponsible drivers on the highways,” Gutier said.

Harkey said although he supports the federal strategy’s plan to reinforce safety features in vehicles and roadways, it is vital that drivers, law enforcement and the government jointly address dangerous driving behaviors.

“Human beings are going to make mistakes,” he said. “But they should not die as a result of making those mistakes.”