The Coyotes’ proposed arena entertainment district in Tempe would sit on 46 acres of land south of the Salt River and would be located near the intersection of Rio Salado Parkway and Priest Drive. (Rendering courtesy of Arizona Coyotes) 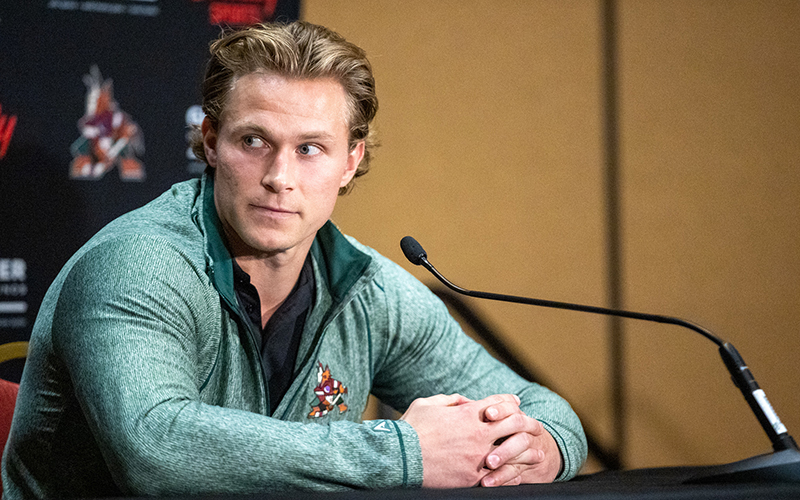 The Coyotes’ Jacob Chychrun said this was the “craziest offseason” he has ever experienced with all the changes on the team. (Photo by James Franks/Cronkite News) 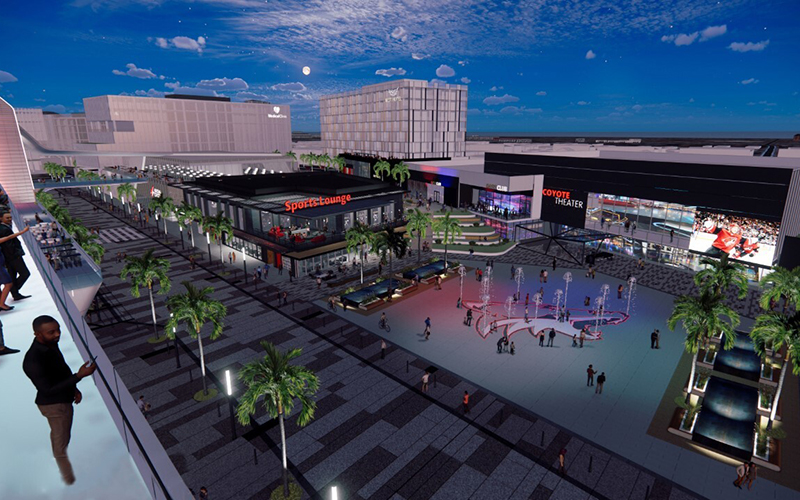 The district would be a mixed-use project and would include hotels, apartment and storefront retail spaces in addition to the arena. (Rendering courtesy of Arizona Coyotes)

GLENDALE – They needed a new coach, a new home and even some new players after making a slew of off-season trades. Now, with a new season around the bend, the Arizona Coyotes entered Wednesday’s training camp feeling refreshed.

“I’m sure there (aren’t) too many teams in history that have had this amount of turnover in a year. I don’t know if expansion teams even have this much,” forward Christian Fischer said, jokingly.

The Coyotes’ 2021 offseason was the busiest among all NHL clubs as the team traded multiple players, signed André Tourigny as their new coach and, most recently, began looking for a new home. This season will be the last at Gila River Arena in Glendale. All of this activity hangs over low pre-season expectations surrounding the Coyotes, giving the players a lot to process and push aside in their preparation.

“I just try to block out the noise and go play good hockey,” forward Lawson Crouse said. “I’d be lying if I said I didn’t see the projections of where we will be this season. Those are just projections, they aren’t always accurate.”

Since 2003, the Coyotes have called Glendale their home. But in August, the city decided to not renew the agreement with the team, beginning the search for a new home. On Monday, the Coyotes revealed renderings for a $1.7 billion arena in Tempe.

While finding a new home is the executives’ headache, the players and coaching staff remain focused on the games ahead. The NHL’s regular season is slated to start Oct. 12, with the Coyotes opening on the road in Columbus Oct. 14. Their home opener is Oct. 18 against St. Louis.

“The furthest I look is tomorrow’s practice. I try to stay in the present,” Tourigny said. “ I don’t look at what’s happening next week, two weeks, two months from now.”

Entering his first year as an NHL coach, Tourigny said he wants to coach a physical team that plays “in your face hockey,” with a roster compiled of players looking to prove they have more to offer. Tourigny has a wealth of experience at the minor league level, along with three years as an NHL assistant coach and time served in the upper-levels of Hockey Canada’s junior and men’s national teams.

With the new coach comes new faces as well. The Coyotes traded most of their core players from the previous season, including Darcy Kuemper, Oliver Ekman-Larsson, Conor Garland and Christian Dvorak. For defenseman Jakob Chychrun, it’s been the most turnover he’s seen in his six years playing for the Coyotes. 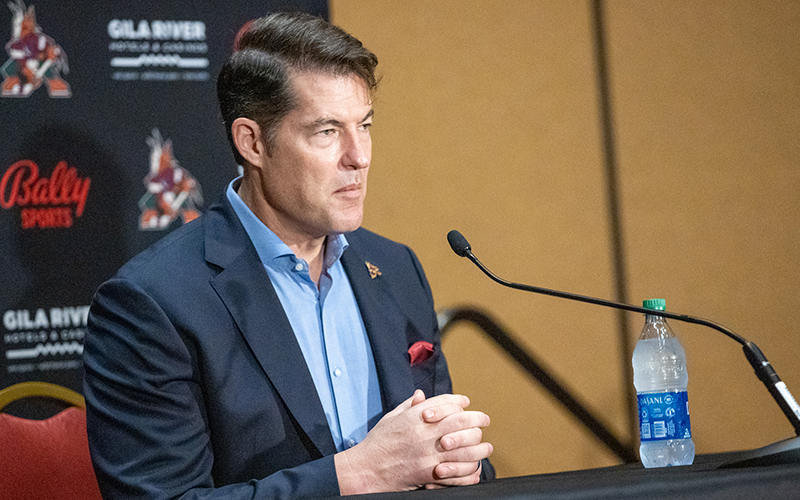 Even with all the background noise, Coyotes general manager Bill Armstrong said, “We’ve got a hungry team.” (Photo by James Franks/Cronkite News)

Chychrun is one of the many players on the roster looking to take that next step. After playing through a wrist injury through the final 20 games of the 2020-21 season, Chychrun feels healthy and prepared for taking a leadership role in the upcoming season.

“I think we have a real opportunity to turn some heads and surprise some people and really start to change the culture here, developing a winning mindset,” he said.

As the Coyotes open up their training camp, the players have read through social media as well, hearing labels calling the team “terrible” and “rebuilding.” But every person involved in the organization sees opportunities to exceed the expectations and produce a talented team for the season.

“We’ve got a hungry team,” Armstrong said. “There’s a competitive team in that locker room.”