Rick Tocchet finished 125-131-34 in 290 games as coach of the Coyotes. The team’s inability to regularly advance to the postseason had a significant impact on the decision. (File photo by Sam Ficarro/Cronkite News)

PHOENIX – When the puck drops in October, a new era will dawn for the Arizona Coyotes.

Less than 24 hours after the conclusion of the 2020-21 regular season, Coyotes general manager Bill Armstrong made his first move of the off-season, a move that initiated a major shift in the landscape of the franchise.

Armstrong announced Sunday that the team and Rick Tocchet have mutually agreed to part ways, ending his four-year tenure as head coach with Arizona where he established a record of 125-131-34 in 290 games.

“That was a tough decision, but it’s an evaluation that I had done all year,” Armstrong said during his exit-day Zoom call with reporters on Monday from Gila River Arena. “Rick Tocchet is a good coach. He’s a good man. At this point in time, I guess probably the easiest way to say it was we were looking for new leadership and a new voice.”

Armstrong will waste no time in his search to fill the head coaching vacancy. 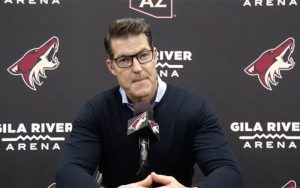 Coyotes general manager Bill Armstrong told reporters during a Zoom press conference that it was hard firing Rick Tocchet but that the team was “looking for new leadership and a new voice.” (Photo by Michael Gutnick/Cronkite News)

“We’re looking for a young coach who’s going to put us over the hump, somebody’s who’s got a little bit of push and some accountability,” Armstrong said. “Somebody with a good structure to how they want the team to play.”

Several players expressed optimism for Tocchet’s return to coaching as he explores his options over the summer.

“It’s part of the business, but I love him and I think he did a good job here,” said Coyotes forward Phil Kessel, who mentioned Tocchet as a main reason for coming to Arizona in 2019. “I’m sure he’ll get back in. I’m sure a lot of teams will be interested in him.”

As Armstrong dives into his first full off-season in the Valley, his vision for the future can take shape with a new leader behind the bench and a shifting core, led by the emergence of a certain defenseman.

“The one huge mega bright spot was Jakob Chychrun,” Armstrong said. “His play moved us forward. You could see the growth in his game.”

Chychrun, 23, turned in a breakout season, leading all defensemen in the National Hockey League with a career-high 18 goals during the pandemic-shortened season, which would have put him on pace for a franchise-high 26 goals in an 82-game campaign.

“The offensive side of my game took a big step this year,” said Chychrun, who revealed Monday that he had dealt with a wrist injury suffered in late March against San Jose. “It’s something that a lot of people were surprised by. I think it was just a part of my game that I knew was going to come for me. Off the ice, I feel like I’ve matured and grown and got myself into a more of a vocal and leadership role for this group.”

Although Armstrong did not make any moves at the trade deadline, pointing to his confidence in the team’s strong bond, Arizona was riddled with injuries during the final stretch of the regular season.

Forwards Nick Schmaltz, Lawson Crouse and Tyler Pitlick finished the year on the injured list. Goaltenders Darcy Kuemper and Antti Raanta were on the shelf for a good portion of the playoff race.

However, in their absences, third-string goalie and taxi-squad call-up Adin Hill stepped up to keep the Coyotes in playoff hunt contention with a respectable 2.74 GAA and a .913 save percentage in 19 games.

“I was really excited about Hill’s play this year,” Armstrong said. “I thought he jumped in and did a great job. He’s got some things that he has to clean up about his game. If he can do that, he can push to be a No.1 goaltender in this league because of his size, his athletic ability and his IQ.”

“I’ve never seen a goaltender from junior in all of my life that’s improved that much. I have to give him a lot of credit for that. He stepped in moments notice and without hesitation, played big for us.”

Hill wasn’t the only surprising success story from the taxi squad.

After 323 games with the Tucson Roadrunners, forward Michael Bunting, 25, earned his big-league shot with his crash-the-net mindset, which rewarded him with 10 goals and 13 points in 21 games with the Coyotes.

“It’s been unbelievable,” said Bunting, who is a pending unrestricted free agent. “I wanted to come in here and prove that I belong in the NHL. I spent my years down in the American Hockey League and it made me the player who I am today. I just came in with a nothing-to-lose attitude.”

Looking ahead to the 2021-22 season which features Arizona moving to the Central Division, the Coyotes could see a massive shakeup of their roster with only 12 current players under contract for next season.

Glancing at the future is a slippery slope to track, especially with the number of conversations Armstrong will have with his players and their respective agents over the next few weeks.

With Seattle entering the league as the 32nd club, the expansion draft throws a slight wrinkle into Armstrong’s summer plans of piecing together a well-rounded lineup.

As for adding prospects, it will be difficult for Arizona to select top-tiered talent through the NHL draft without a first-round pick, due to violating the league’s combine testing policy last year under former general manager John Chayka.

“Because of the simple fact that we weren’t able to pick in the first round last year and don’t have one in the first round this year, we’ve got to find creative ways to find players through free agency,” Armstrong said. “We have to be very, very creative in how we find players. It’s not like we’re picking in the top 10 the last two years. We have to stock the team to make it a competitive playoff team.”

The Coyotes have some talent making headway down on the farm, such as first-round picks Barrett Hayton and Victor Söderström.

Söderström and forward Jan Jeník each scored their first career NHL goals this year in the final regular-season series. They’ll head back to Tucson as the AHL playoffs begin May 18.

Victor Soderstrom gets his 1st NHL goal on this sick shot! pic.twitter.com/lFusqIh4z5

Although the off-season is a time for rest and recovery, four Coyotes will take part in the 2021 IIHF World Championship from May 21 to June 6 in Riga, Latvia. Forward Conor Garland will play for the United States. Forward Michael Bunting and goaltenders Darcy Kuemper and Adin Hill will play for Canada.

Bunting said he received the invitation from Coyotes Chief Hockey Development Officer Shane Doan, who is Canada’s assistant GM, adding to his excitement to represent his country.

“I’m pretty excited to head over there and represent my country,” Bunting said. “I’ve never put that jersey on in my life so that will be a pretty cool experience for me and my family and friends.”

It’s opportunities like these that allow younger players to adapt and evolve into their roles. Although Bunting and Garland enter the summer as free agents, they will listen in on offers to stay in the Valley.

“Of course, I’d love to be back here,” Garland said. “Hopefully, the Coyotes want me back here, and that’s something we can look forward to for years to come.”

Garland and the handful of free agents will be high up on the checklist of Armstrong’s summer to-do tasks.

Despite missing the playoffs in his first year, Armstrong believes he can retool his team in a timely manner in order for the Coyotes to be playoff contenders as soon as next season.

“There are some holes we have to fill with this organization,” Armstrong said. “We’re going to do that by resigning some of our guys that are free agents, but also getting into the free agent pool and finding the right guys that can provide some identity for us.

“We’ve got some work to do. The core players really have to focus in and push themselves. This summer will have a lot to do with how far we can go next year. We’re going to be right in the thick of things, fighting for a playoff spot.”