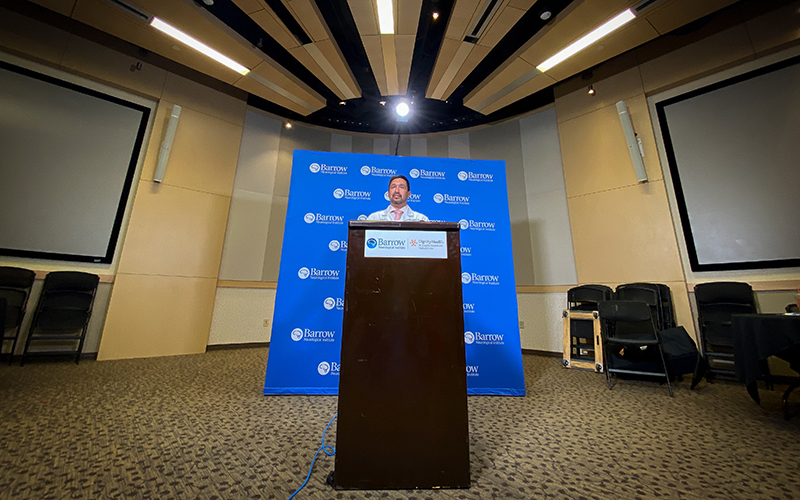 Concussions have forced their way into the national health conversation, in large part because of a better understanding of chronic traumatic encephalopathy, or CTE, the byproduct of numerous concussions and head trauma.

Arizona Cardinals’ wide receiver Christian Kirk, a 2015 graduate of Saguaro High School in Scottsdale, recently talked about the Barrow Brainbook, an educational module introduced 10 years ago to teach students how to prevent concussions, on a Zoom news conference with Dr. Javier Cárdenas of the Barrow Neurological Institute.

The average annual concussion rate is 39.8 per 100,000 athlete exposures, according to a study compiled from 2005 to 2016 for the American Journal of Public Health. For ages 15 to 24, sports are the second most common cause of brain trauma behind motor vehicle accidents. Trauma can seriously inhibit brain development in that age group, resulting in side effects that last a lifetime, affecting mental health and acuity.

The Barrow Brainbook, which teaches players about brain safety and concussions, has been utilized by more than 1 million high school athletes in Arizona, which became the first state to require all students to complete the training before competition. No other state has officially required students to learn the Barrow Brainbook, but some states have inquired about implementing the program in their states.

Kirk praised the book for keeping him safe and educated about head trauma. 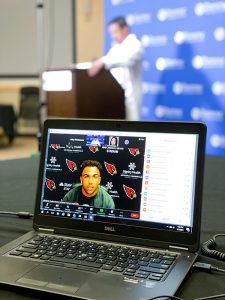 Cardinals’ receiver Christian Kirk, shown at a Zoom conference Sept. 1, credits the Barrow Brainbook for his better understanding of head trauma and its affects on the brain. (Photo courtesy of Barrow Neurological Institute)

“During my time at Saguaro, I was introduced to the Barrow Brainbook,” he said at the Sept. 1 Zoom conference. “Normally, we would go through a normal baseline concussion test with our athletic trainer, and it didn’t allow things to be caught as in depth as the program book.”

After Kirk first used the Barrow Brainbook, he felt safer and more educated about concussions and what they mean for his brain health.

“I know what signs and symptoms to look for, to be able to self evaluate myself first and to know if something is wrong,” he said.

Kirk, who was drafted by the Cardinals out of Texas A&M in 2018, said he has managed to avoid concussions throughout his NFL career, only having to go through sideline protocol once.

Cárdenas said it can be difficult getting students and parents alike to heed caution about contact sports and concussions, despite the dangers especially associated with the young, developing brains of high school student athletes.

Kirk and Cárdenas also talked about other developments meant to make football safer, particularly the technological advancements of helmets.

“For the last three to four years, the helmet technology has improved eightfold for each of those years,” said Cárdenas, who directs Barrow’s Concussion and Brain Injury Center. “At the NFL level, nearly every single athlete is in the highest performing helmet. That matters because that technology trickles down to our college athletes and, most importantly, our youth athletes.”

“In my opinion, the athletic trainers are the most important health care provider for all of our athletes whether it’s at the professional level, the college level and the high school level,” Cárdenas said.

“They are not just trying to put a temporary Band-Aid over an injury,” Kirk said. “They want to look out for your long-term health and longevity and make sure that not only your quality of your career and your play is at a high level, but your quality of life as well.”

Football, and high school football in particular, has been getting safer, according to researchers at the University of North Carolina at Chapel Hill. Cárdenas noted that eliminating the blindside block and other dangerous plays has lessened helmet-to-helmet contact. Two out of three concussions occur during a blindside block, according to the National Athletic Trainer’s Association.

To expand protection of the player being blocked, @NFL owners voted to eliminate blindside blocks. One-third of all concussions on punts were caused by blindside blocks. With the rule change, any forcible contact by the blocker with his head, shoulder or forearm is prohibited. pic.twitter.com/abA2cENnXe

Even so, football has the greatest chance for exposure to head trauma. The extent to which the sport can become safer is up to the continuation of research and education of players.