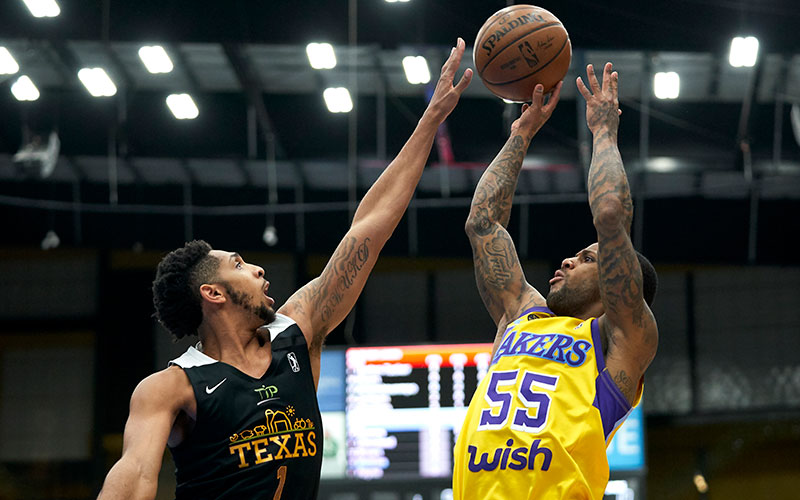 Cameron Payne played for the Mavericks’ affiliate in the G League, but it was Suns head coach Monty Williams, associate head coach of the Thunder when they drafted Payne in 2015, who took a chance on him in last year’s NBA bubble. (Photo courtesy of the Texas Legends)

PHOENIX – Cameron Payne made his NBA Finals debut Tuesday after a long road back to the spotlight, via the Chinese Basketball Association and the NBA G League. The Phoenix Suns backup point guard announced his presence in Game 1 with several well-timed shots to extend the Suns’ lead, including a key 31-foot 3-pointer in the fourth quarter.

Payne’s success in the high-pressure environment of the playoffs is no surprise to Eric Snow, a former point guard with plenty of postseason experience who witnessed Payne’s journey firsthand.

“It was always my belief that he was an NBA player playing in the G League,” Snow said. “He just was waiting for the right opportunity to come again.”

Snow appeared in 103 playoff games over his 13-year career, including three Finals appearances with three teams. He played with Gary Payton and Shawn Kemp on the Sonics, with Allen Iverson and Dikembe Mutombo on the 76ers, and with LeBron James on the Cavaliers.

Now he’s plying his trade as the associate head coach for the Texas Legends of the G League – the NBA’s development league – for whom Payne made an instant impression in just 15 games before the COVID-19 pandemic shut down the season.

Payne joined the Legends in January 2020 after an abortive two-game stint with the Shanxi Loongs of the Chinese Basketball Association. Snow saw right away that Payne was highly motivated, despite his past struggles with four NBA teams since being drafted in the first round.

“Sometimes those guys kind of think they shouldn’t be there, so the approach sometimes is different,” Snow said. “But from his standpoint, he came there on a mission, he came there to prove that he should be there, and that’s how he played.”

Payne made an immediate impact at the Mavericks’ affiliate as a former top talent on a team composed primarily of undrafted rookies, averaging 23 points, eight assists and five rebounds per game, and earning G League Player of the Week in the penultimate week of the shortened season.

Another associate head coach relationship brought Payne his hard-earned NBA opportunity. In June 2020, with the NBA bubble weeks away, Payne got his chance from Suns head coach Monty Williams, who was an assistant for Oklahoma City when the Thunder drafted Payne out of Murray State in 2015.

“He probably felt that the communication factor would be there in advance, to give him an opportunity,” Snow said. “And I think when he went there, he was so hungry and so thirsty that he (got) the ball rolling and he’s been an impact player for them since he arrived.”

Payne recorded career highs in points per game, rebounds per game and 3-point percentage as the Suns went unbeaten in the bubble.

“To be honest, when I first signed, I just wanted to be able to get some time in the bubble and try to make someone’s roster next – this season, basically,” Payne said in a press conference Monday. “I had a pretty good bubble run. I didn’t think all this was going to come about.”

Payne stuck with the Suns and took on a key bench role throughout the full 2020-21 season learning from new acquisition Chris Paul, before being thrust into the spotlight during the Western Conference Finals when Paul missed two games because of COVID-19 protocols. 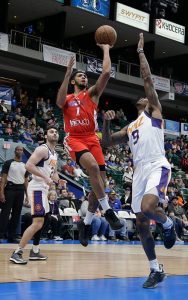 Legends associate head coach Eric Snow said Payne (center) despite his first-round pedigree, had the right mindset when he played in the G League. (Photo courtesy of the Texas Legends)

Making his second start of the year in Game 1, Payne earned plaudits from Clippers coach Tyronn Lue for “setting the tone early, basically being able to attack, get to the paint” as the Suns won in Phoenix.

“He didn’t defer to anyone. He started running the squad,” Williams said on June 22 before Game 2. “And we’re going to need that and more tonight.”

That night, Payne delivered a defining performance on the big stage, notching a career-high 29 points to lead the Suns in scoring en route to a climactic “Valley oop” victory. But after the game, Payne wanted primarily to stress that he had no turnovers.

“I’m trying to keep that same identity because I’m the point guard,” he said. “I just tried to come out there, hold it down for (Paul), play my game, just live with the results.”

And when the Suns dropped Game 3, they did it without Payne, who left in the first quarter with an injury. Paul said in a postgame press conference that Payne’s absence hurt the team.

“I’ve been at home watching these last two games,” Paul said, “and I saw the pace that he was playing with.”

Payne returned for the next game and readjusted to his role off the bench. On June 30, the Suns’ Twitter account couldn’t help but note the serendipity: Exactly one year after Payne signed with the team, he had clinched a berth in the Finals.

Payne said in Monday’s press conference that when he works out now, he thinks about a time when a return to the NBA didn’t seem assured, and his family kept asking him where he was going to play next.

“Little things like that (are) always in the back of my head when I’m working out because I never want to be back at the bottom, going to China and stuff like that,” Payne said. “It’s just built me a little different coming in on this next go-round.”

Snow had the same perception of the new and improved Cameron Payne.

“His path is different, but that path has also helped shape and mold him to take upon the opportunity that he has right now,” Snow said, “and I think it’s built even more hunger in him, because of the path that he’s had to take, that he’s like ‘I’m not looking back anymore.’”