Both forward Frank Kaminsky (left) and guard E’Twaun Moore (right) have been in the starting lineup although they are coming off the bench now. That could change as Phoenix Suns coach Monty Williams adjusts his lineup. (Photo courtesy of Tana Hughes/Phoenix Suns)

PHOENIX – Still sporting a sleeveless warmup shirt with the hoodie covering his head, Phoenix Suns guard Jevon Carter grinned when a reporter asked if he planned to spend the NBA All-Star break working on his game following a 120-98 Phoenix win over the Golden State Warriors earlier this month. Carter had just gotten his first taste of extended playing time since Feb. 8.

“There you go,” Carter said, laughing. “You answered your own question.”

Now in his third NBA season, Carter’s role in Phoenix is not unfamiliar to him. He understands the need to be ready when called upon.

A two-time Big 12 Defensive Player of the Year at West Virginia, Carter’s role this season is to provide a spark on that end in spot minutes, as he did recently in the fourth quarter of a 122-111 Phoenix loss to the Indiana Pacers.

However, his opportunities have been limited this season. After averaging 13 minutes a game over the Suns’ first 17 games, Carter has only played more than 10 minutes in a game three times in their last 25 contests. He hasn’t played at all in eight of them. 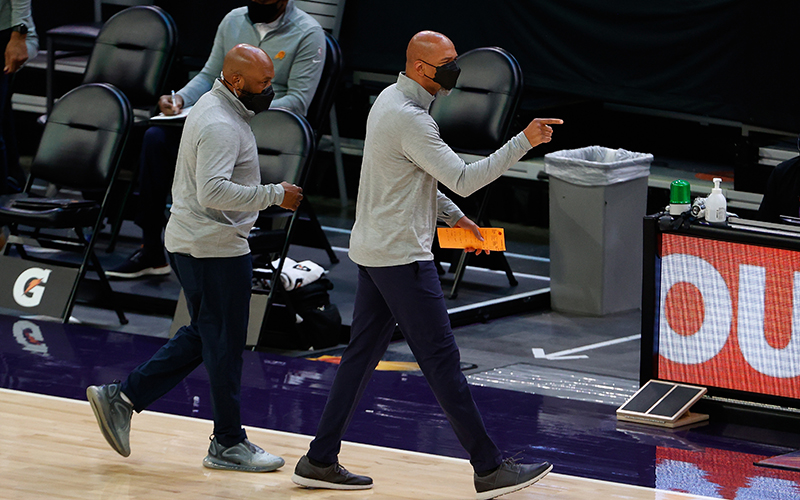 It’s a situation that could easily discourage Carter and others who have played sparingly. But the willingness of the team’s reserves to stay engaged and accept their roles has been a key part of the Suns’ success under coach Monty Williams in his second season.

Williams has the team in position to snap a 10-year playoff drought with the second-best record in the Western Conference at 29-13.

“I have not coached a group like this before with this much talent on the bench, the depth we have,” Williams said. “But above that, the professionalism.

“It’s one of the things I value about this team, the way we approach practice, the way we have affected our culture in a good way because of that attitude of doing whatever it takes to help our team win and push the program and organization in a good place.”

With reserve forward Cameron Johnson missing six games from March 4 to March 19 due to health and safety protocols, Carter and backup guard Langston Galloway were among players who saw their opportunities increase after the All-Star break. They played 18 and 21 minutes, respectively, in Phoenix’s 122-99 win over the Memphis Grizzlies on March 15, and Galloway had an efficient outing, scoring 14 points on five-of-six shooting in 15 minutes during his team’s 113-101 win over the Minnesota Timberwolves on March 19.

.#Suns coach Monty Williams has praised the preparedness of Langston Galloway, and that was evident Friday.

Had 14 points and 3 assists in 16 minutes. You get a good sense of his veteran feel here, hesitating on a 3-on-2 to freeze the defense and find Bridges for an easy dunk. pic.twitter.com/OPWzOCKKCI

Galloway, one of just four Suns players who has played at least six NBA seasons, has been called “an every-day type guy” by Williams, who cited Galloway’s vegan diet and consistent effort. Phoenix has a 12-4 record in games in which Galloway has played at least 10 minutes, and his points-per-shot attempt – a statistic calculating his points per 100 possessions from field goals and free throws – is the highest of his team at 143.8, according to Cleaning The Glass, despite not appearing in 12 games.

“He’s preparing for his opportunity every day, and it’s not just basketball,” Williams said. “It’s his diet, it’s the way he approaches everyone in life. It’s something we value. And we know we can throw him in the game, he’s going to give us great effort, he’s going to space the floor and he’s got experience and know-how.”

Galloway agreed experience has helped him in his role with the Suns.

“I think that the biggest thing, this is my seventh year in the NBA,” he said. “And just from a standpoint of being able to not just stay ready but keep everybody involved, keep myself involved by talking to my teammates, watching the game, picking their brains and that’s huge from a mentality standpoint.”

Throughout the season, the Suns have strived to be a team that plays with effort on both ends. They are one of two NBA teams, along with Utah, that rank among the top eight in the NBA in offensive and defensive efficiency.

And their defensive progress is viewed as critical to the team’s success by coaches and players.
Phoenix added to its versatility on that end on March 18 by acquiring fourth-year forward Torrey Craig from the Milwaukee Bucks for cash considerations. Craig, a 6-foot-7 player who can guard multiple positions with a reported 7-foot wingspan, ranked above the 90th percentile of players at his position in block percentage and offensive rebounding percentage in three seasons with the Denver Nuggets from 2017-20, per Cleaning The Glass.

Craig made his Suns debut on Sunday in a 111-94 win over the Los Angeles Lakers, making his only shot attempt and picking up three fouls in seven minutes. He had a season-high 10 points on 4-of-7 shooting in 21 minutes during a110-100 Phoenix victory over the Miami Heat on Tuesday.

Once he acclimates to Phoenix’s schemes, Craig can be a valuable asset off the bench, according to Williams.

“He’s a big, strong wing defender who can guard (point guards) and (shooting guards) and power forwards and can switch on to a bigger guy,” Williams said. “He has the ability to play in point-five, he can knock down his shot. We liked him when he was in Denver, competing against him, as he was such a good defender and tough guy, for sure.”

Craig said he’s excited to be in Phoenix. 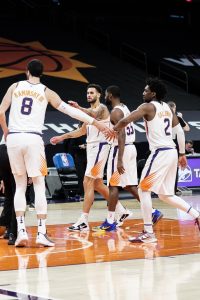 Williams has been impressed at how well his reserves have adjusted to coming off the bench. “I have not coached a group like this before with this much talent on the bench, the depth we have,” he said. (Photo courtesy of Tana Hughes/Phoenix Suns)

“Playing against these guys the last couple years, always had tough games against these guys,” he said. “They compete. They play at a high level. I’m just excited to be a part of a new team that’s trying to get a championship.”

Since Johnson returned on Sunday, Williams and his staff have again tweaked their rotation, as backup point guard Cameron Payne and forwards Dario Saric and Abdel Nader were the only other Suns who exceeded double-digit minutes off the bench against the Lakers.

Galloway and Craig played 13 and 21 minutes, respectively, in Phoenix’s win against Miami on Tuesday while forward Frank Kaminsky and guard E’Twaun Moore, who have started previously, did not play in the last two games. However, they could be called upon again, depending on matchups.

Forward Jae Crowder, who is starting now, has moved between bench and starting roles throughout the season but has maintained a strong presence with each unit.

“Jae’s just a pro,” Williams said. “Two, he’s a competitor and he has a way about him that allows for him to connect with a lot of people.

“The example that I give of Jae is, typically guys shoot at the same basket with the same group of guys every day. Jae is the one guy that I’ve seen that will go around the gym and shoot with different groups. I think it speaks to his ability to connect with people.”

As the Suns approach the postseason, they will need to continue to accept their roles to maximize the team’s success.

That’s something they don’t believe will be an issue.

“It’s such a luxury to have, but we expect that,” Suns guard Chris Paul said of the team’s willingness to buy in. “We talk about it all the time. We’re one of the few teams in the league that has a bench that comes in, and they’re basically starters. So that’s why we’re a team. We pick each other up on any given night, and it’s great to be a part of it.”