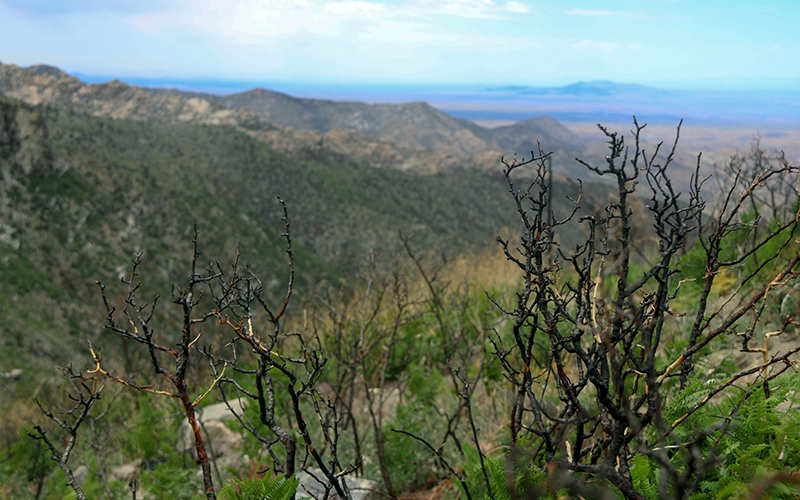 Recovery on Mount Lemmon depends on this summer’s monsoon, says Mark Hart, a spokesperson for the Arizona Game & Fish Department in Tucson. “We did have snow and rain events in February and March here, but not enough.” (Photo by Rae Johnson/Cronkite News) 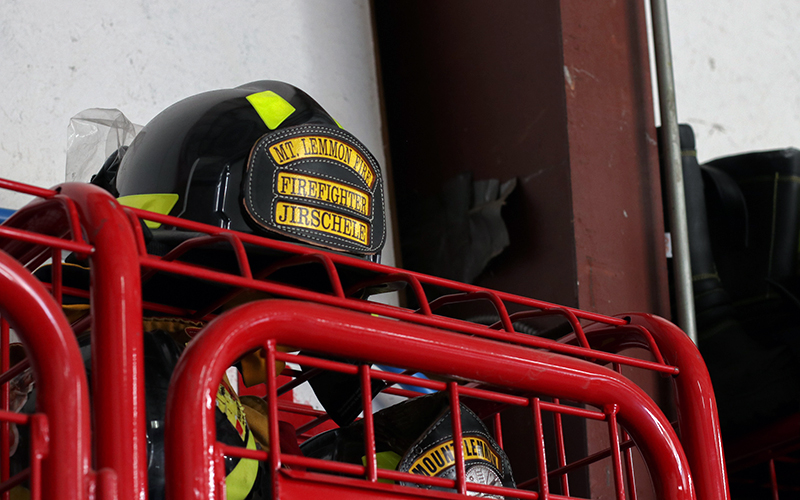 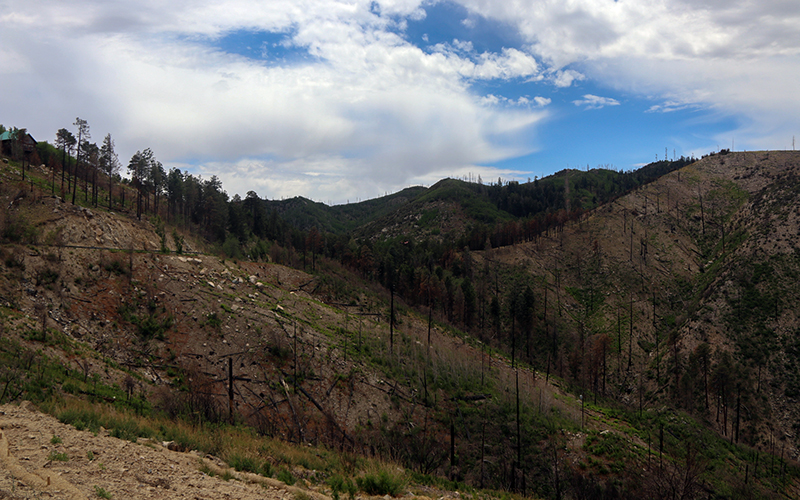 In 2013, more than 30 desert bighorn sheep were reintroduced to the Santa Catalina Mountains. Since the Bighorn Fire, the sheep have moved back and are thriving, says Mark Hart of the Arizona Game & Fish Department. (Photo by Rae Johnson/Cronkite News) 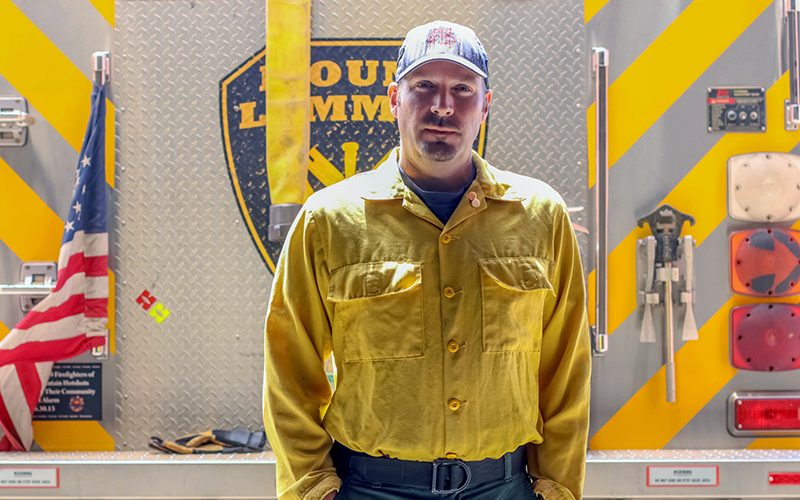 Dan Leade, captain of the Mount Lemmon Fire District, was part of the team that fought last summer’s Bighorn Fire. The emotional toll on residents was a unique challenge of this particular fire, he says. (Photo by Rae Johnson/Cronkite News) 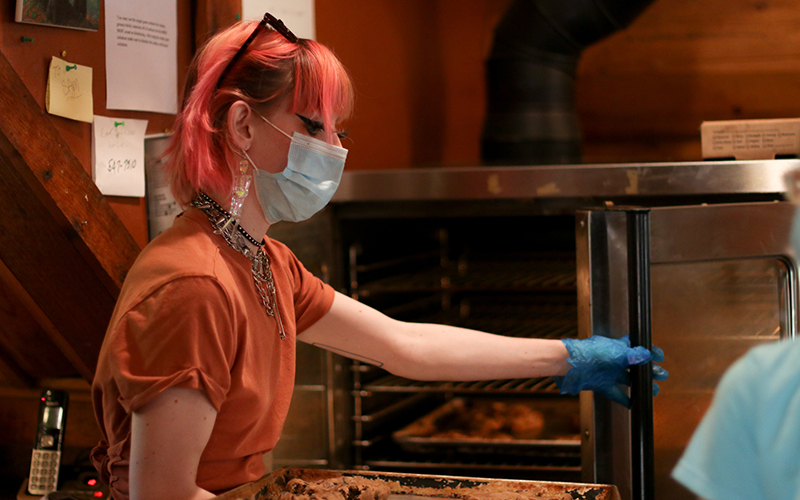 April Hudgens, supervisor at the Cookie Cabin in Summerhaven, is grateful the Bighorn Fire spared the town. There was “a huge sense of relief and, honestly, excitement to get back on the mountain.” (Photo by Rae Johnson/Cronkite News) 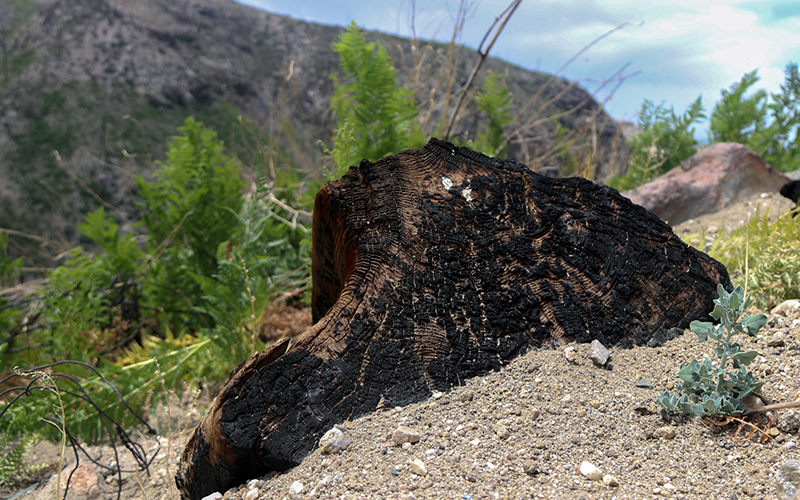 TUCSON – It’s been a year since the Bighorn Fire blackened broad swaths of the Santa Catalina Mountains north of Tucson. Now, a recent tour of Catalina State Park and Mount Lemmon reveals sprigs of new growth peeking through the forest floor. Wildlife, including bighorn sheep, are returning. Life in Summerhaven, a tiny community near the summit of Mount Lemmon, has returned to normal.

But at a time when more than 20 wildfires are burning across drought-wracked Arizona, the memory of – and respect for – fire is never far away.

“The mountain was lit up like the Fourth of July, and it was very startling to many people – scary, in fact,” Mark Hart, public information officer for the Arizona Game & Fish Department, recalled on the news media tour.

The fire began June 5, 2020, after lightning struck the Pusch Ridge Wilderness. It burned for 48 days, growing into one of the biggest fires in Arizona history at nearly 120,000 acres.

Residents of the Southwest are intimately familiar with the devastating effects of fire on homes and businesses, but Hart said wildlife in the rugged Catalina range can benefit from such events as the Bighorn Fire.

“It clears dense vegetation, promotes new growth and, indeed, can alter the landscape in many positive ways,” he said.

Wildlife has returned to the mountains, Hart said, including the population of bighorn sheep.

“We have seen abundant deer on the mountain,” he said. “The mountain lion population is healthy as ever. So those are indicators to us that, other than the burnt landscape, that the ecosystem is functioning as it should.”

Winding along the Catalina Highway up Mount Lemmon’s southern flank, saguaros give way to ponderosa pines as the elevation increases.

“Many people will remember this location as where the fire blew up, burning with extremely high intensity,” Hart said, referring to the 12 square miles of the Mount Lemmon Fire District.

Russell Benford, the hazardous fuels program manager at the Arizona Department of Forestry and Fire Management, said burn areas are “almost entirely dependent on rain” to recover. But too much rain, he said, can increase the risk of flooding and mudslides.

Precipitation also affects how much flammable vegetation is allowed to grow in a given season, Benford said. 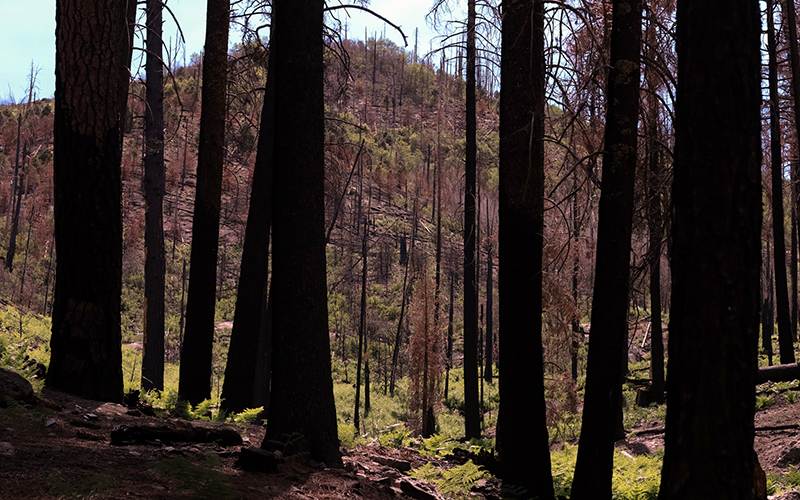 “The only thing that we can be sure of is there will be another fire and the residents of Summerhaven will be at risk once again,” says Mark Hart of Arizona Game & Fish. Residents should create a defensible space around their property, he says, because fire is a natural part of the environment in the Catalinas. (Photo by Rae Johnson/Cronkite News)

The mountain saw a wet spring this year, encouraging the growth of many non-native grasses and small flowering plants that created enormous fuel for fires when they dried out. Native plant species, however, have adapted to grow “with very little rain,” Benford said.

“Even small sprinkles, a light monsoon season, could help bring back the native plants that are less prone to burn catastrophically,” he said.

As plant life returns to normal, so does the unincorporated community of Summerhaven, near the 9,157-foot summit of Mount Lemmon. Residents, Benford said, have been involved in wildfire safety and recovery through the Firewise initiative, a nationwide effort to help communities reduce wildfire risk.

Working with programs like Firewise allows towns to “create a community that is mindful of the risk that is around them … and to do something proactive about it,” he said.

Firewise aims to “create conditions that reduce wildfire intensity in communities and neighborhoods and to prevent home ignitions” by teaching people about defensible and survivable space, which are meant to create space between homes and potential damage from wildfire.

Wildfires are “no stranger to this mountain,” Benford said. 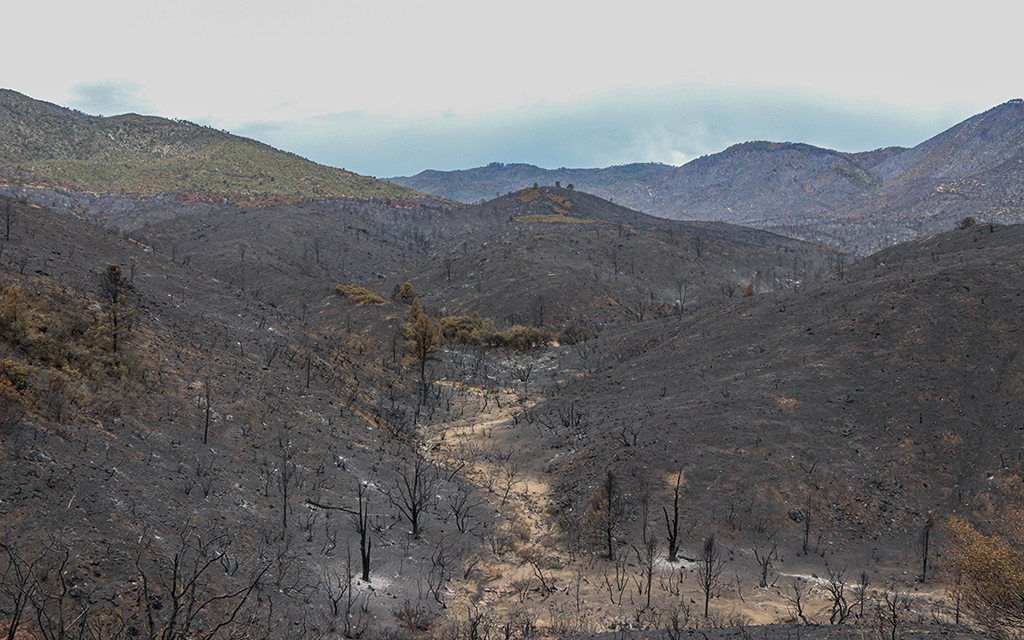 In 2003, the Aspen Fire burned for almost a month and destroyed 340 homes and businesses in Summerhaven. The memory of that fire lingers for April Hudgens, supervisor at the Cookie Cabin, a rustic building near the end of the town’s unlighted main street.

“A lot of our cabins burned down … we were nervous that was going to happen again” last summer, she said.

Hudgens was among those evacuated during the Bighorn Fire. At the time, residents couldn’t access the mountain and weren’t sure they’d have anything to come back to, she said.

“Residents and employees all took it day-by-day when the fire was going,” she said.

Summerhaven’s residents, about 40 people and some commuters, supported each other emotionally during their evacuation, Hudgens said.

“Everyone was talking to each other and keeping tabs on each other when the fire was going and we weren’t able to see each other every day,” she said.

Fortunately, the Bighorn Fire didn’t destroy any homes or businesses in Summerhaven. Hudgens said it was “amazing” to return to homes and businesses after evacuations were lifted.

The Bighorn Fire was officially contained on July 23 after burning nearly 120,000 acres through the Santa Catalina Mountains. It was just one of a string of blazes in one of the worst fire seasons in the state, burning nearly 1 million acres.

Fires this year have been active. More than 20 wildfires have burned across the state since spring, and officials predict 2021 will have above-normal activity. However, recent rainfall has allowed officials to reopen the Coconino and Kaibab national forests after closures due to hazardous fire conditions. 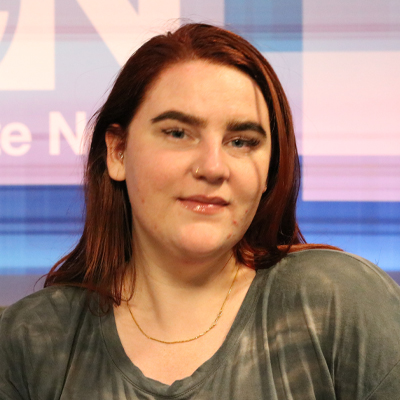