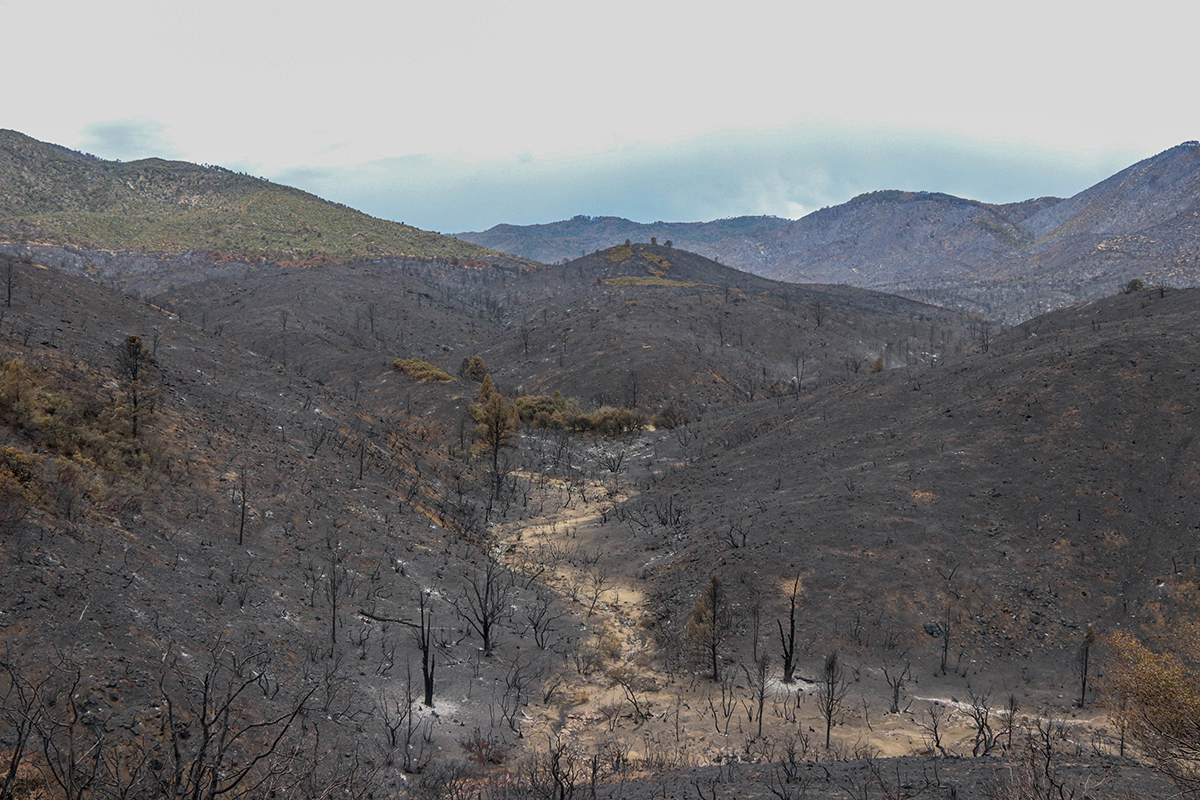 Since igniting June 4, the wildfire has chewed through nearly 180,750 acres in the Tonto National Forest, damaging 52 structures but causing no injuries or fatalities. Fire officials opened some affected areas to reporters Wednesday, offering a first look at the blaze, which was 89% contained Thursday afternoon.

The Telegraph Fire is one of the largest Arizona wildfires in the state’s history. Last year’s Bush Fire spread across 193,000 acres, according to InciWeb, an interagency wildfire information system. The 2011 Wallow Fire, Arizona’s largest, burned more than 500,000 acres.

Public information officers for the fire said Telegraph’s growth has been fed by excessive heat, long-term drought and high winds. 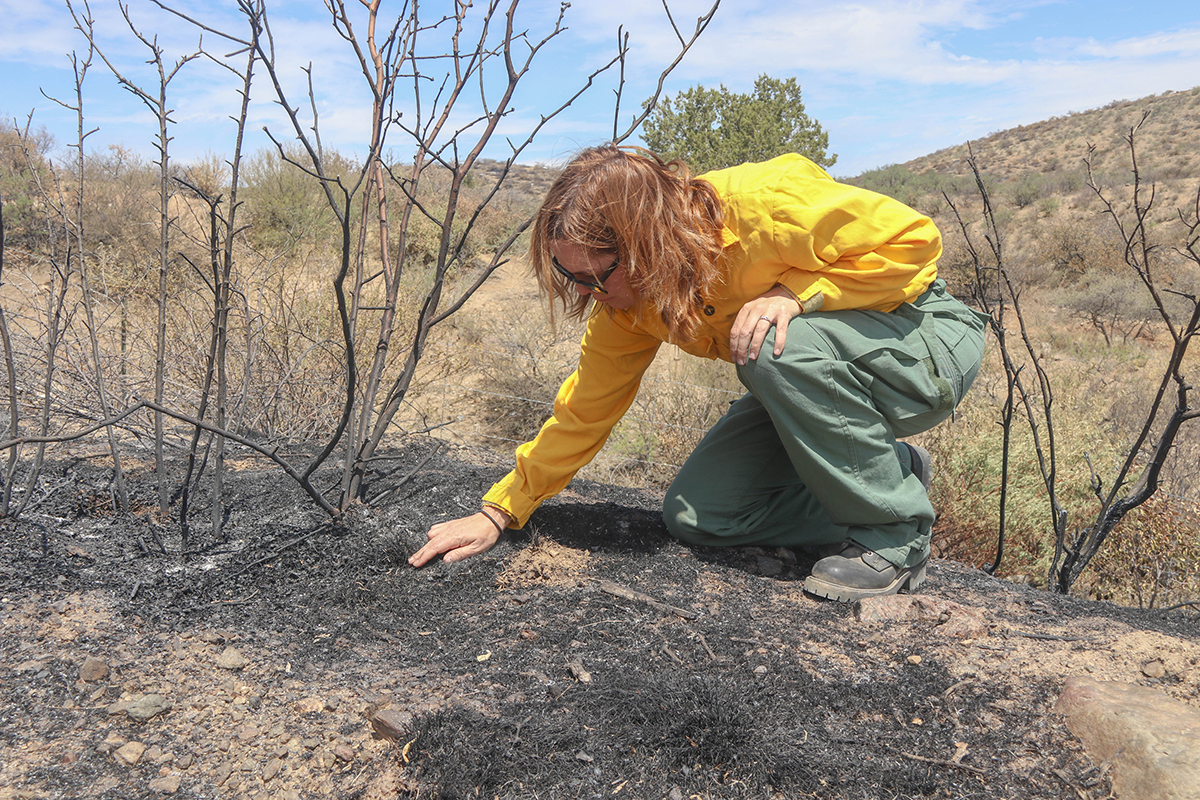 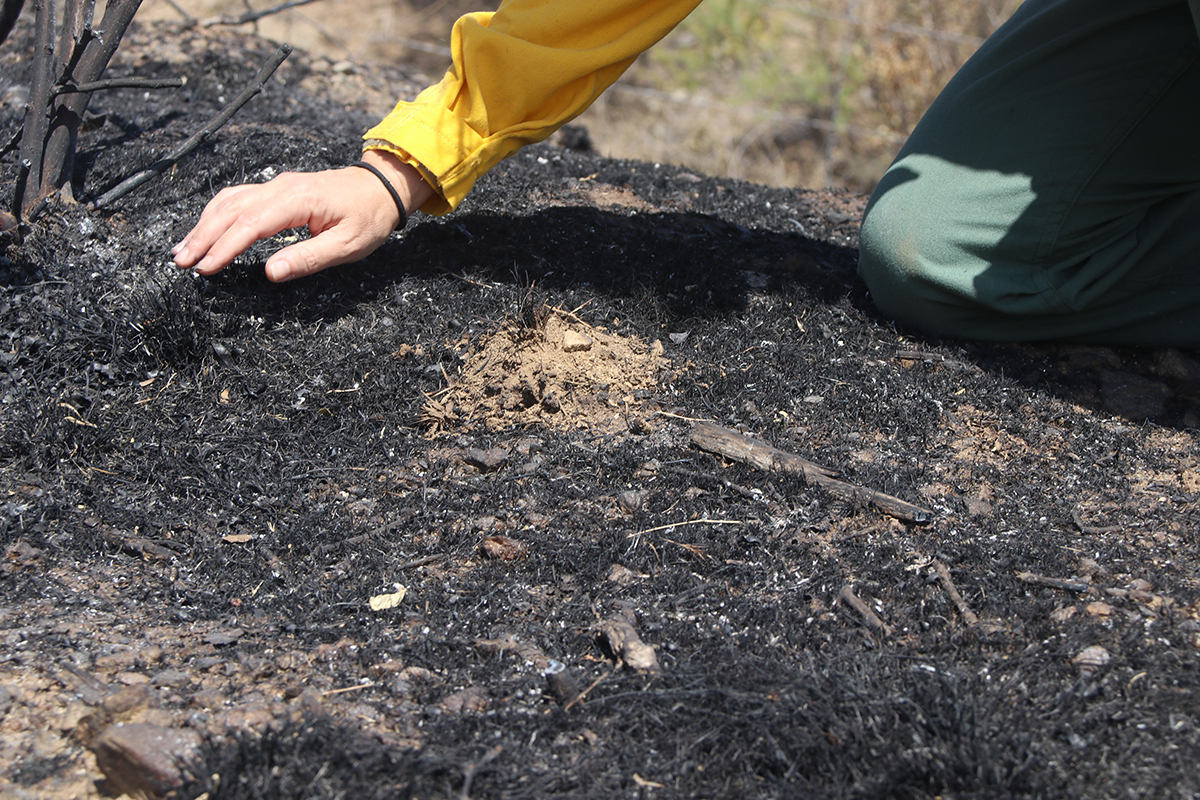 University of Arizona fire ecologist Molly Hunter says the Telegraph Fire is “doing what it is supposed to do.” Pushing back the blackened dirt next to a trail off State Route 77, she notes that the heat affected the soil mostly at a surface. “This is an indication that everything below the surface has survived.” (Photos by Gianluca D’Elia/Cronkite News)

University of Arizona fire ecologist Molly Hunter says the Telegraph Fire is “doing what it is supposed to do.” Pushing back the blackened dirt next to a trail off State Route 77, she notes that the heat affected the soil mostly at a surface. “This is an indication that everything below the surface has survived.” (Photos by Gianluca D’Elia/Cronkite News)

Pushing back scorched soil along a trail off State Route 77, Hunter uncovered dirt that still was light brown. She said soil, grass and plants in the region have mostly burned at their surfaces and will grow back within a year. The loss of shrub coverage also helps to reduce additional fire threats. 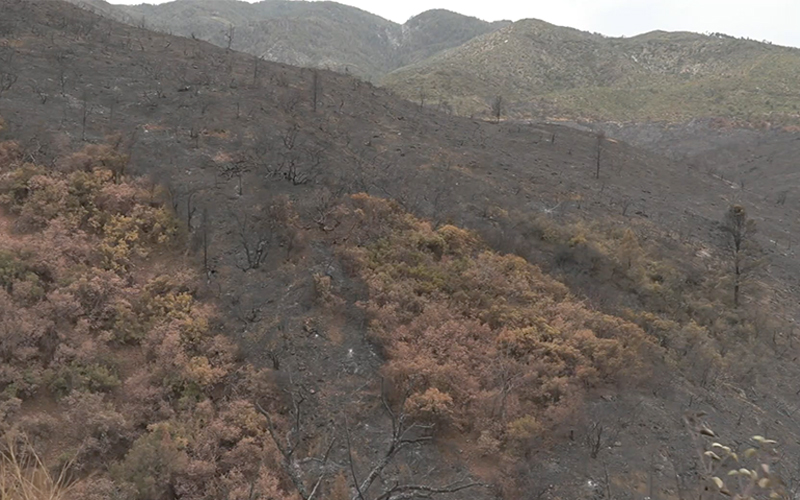 “There’s some char on it and some ash, but the bark is still there,” Hunter said, crouching over a burned bush and examining its bare branches. “Once you get a little bit of moisture, it’ll start producing new leaves.

“The grasses, in particular, are going to love this fire. As long as there is significant moisture this year, by next year, you’ll see grasses rebounding.”

Lower temperatures and rain on Wednesday helped efforts to contain the blaze. Now that monsoon season has arrived, the expected storms will help restore moisture to the terrain in Gila County.

For days, aircrafts also have dropped a retardant containing fertilizer to slow the fire and restore moisture to the soil. 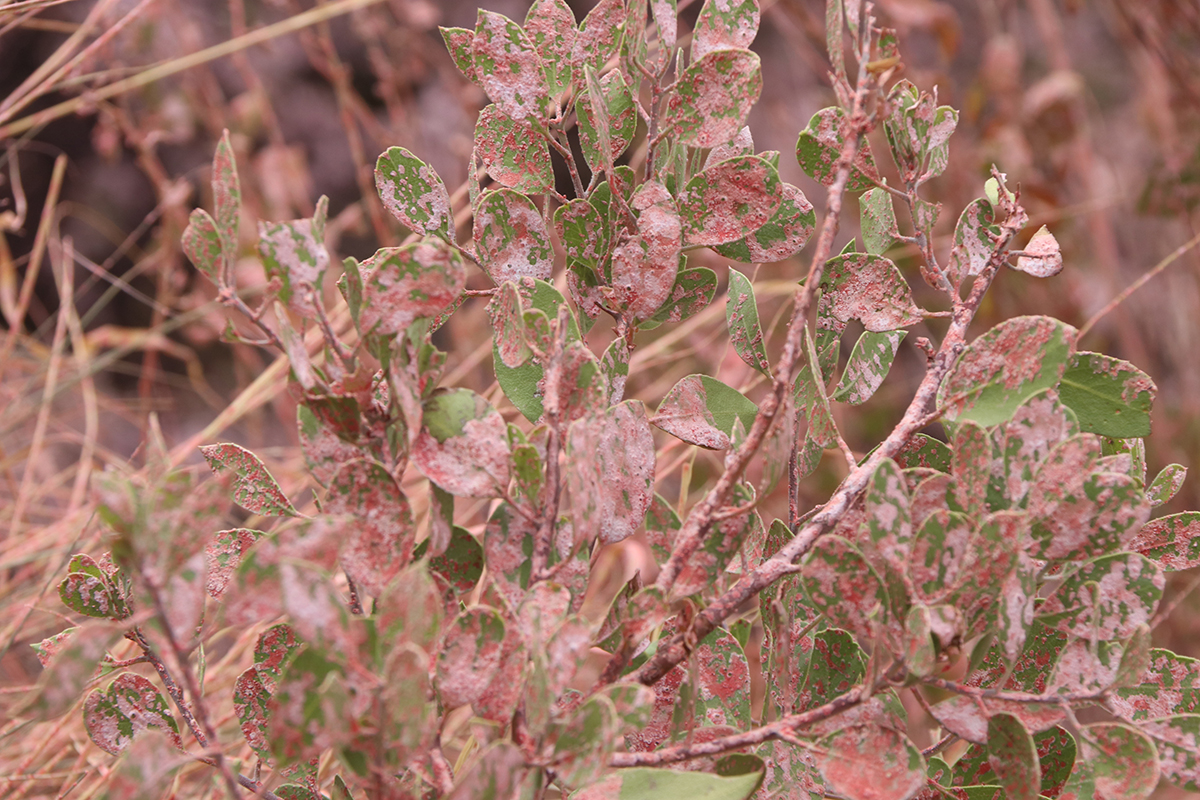 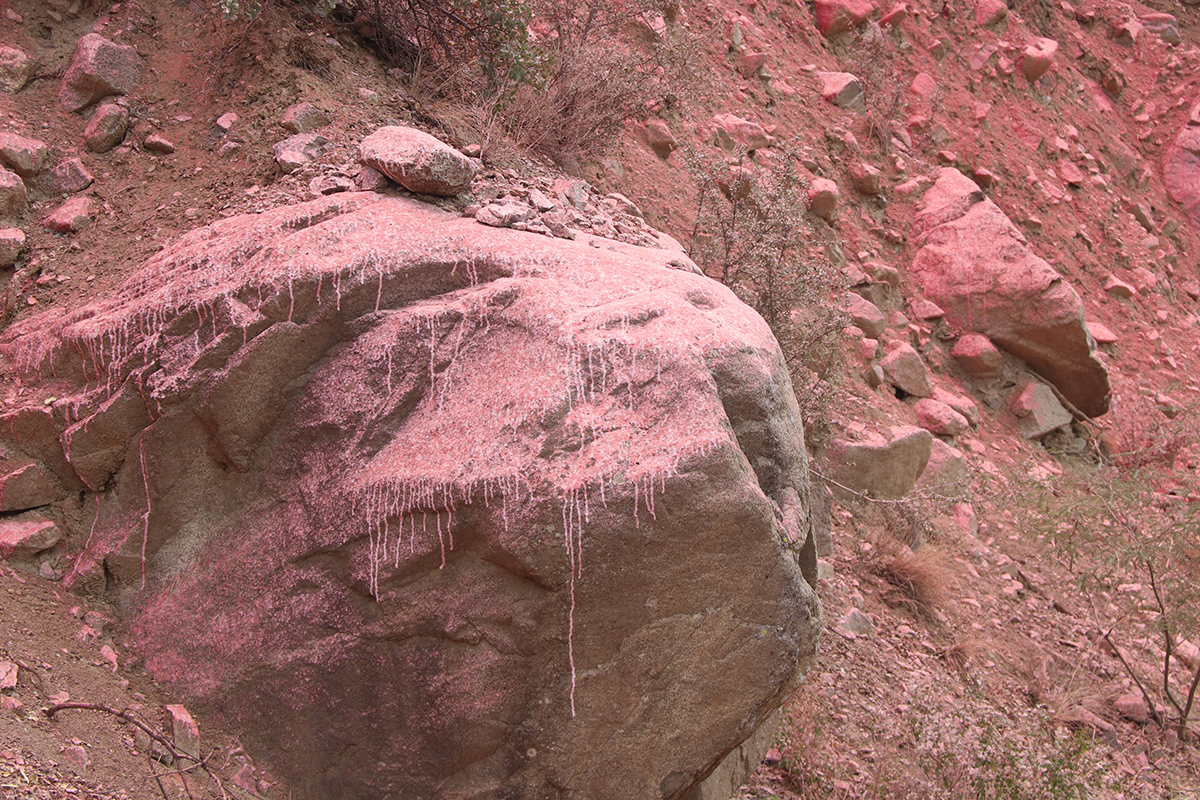 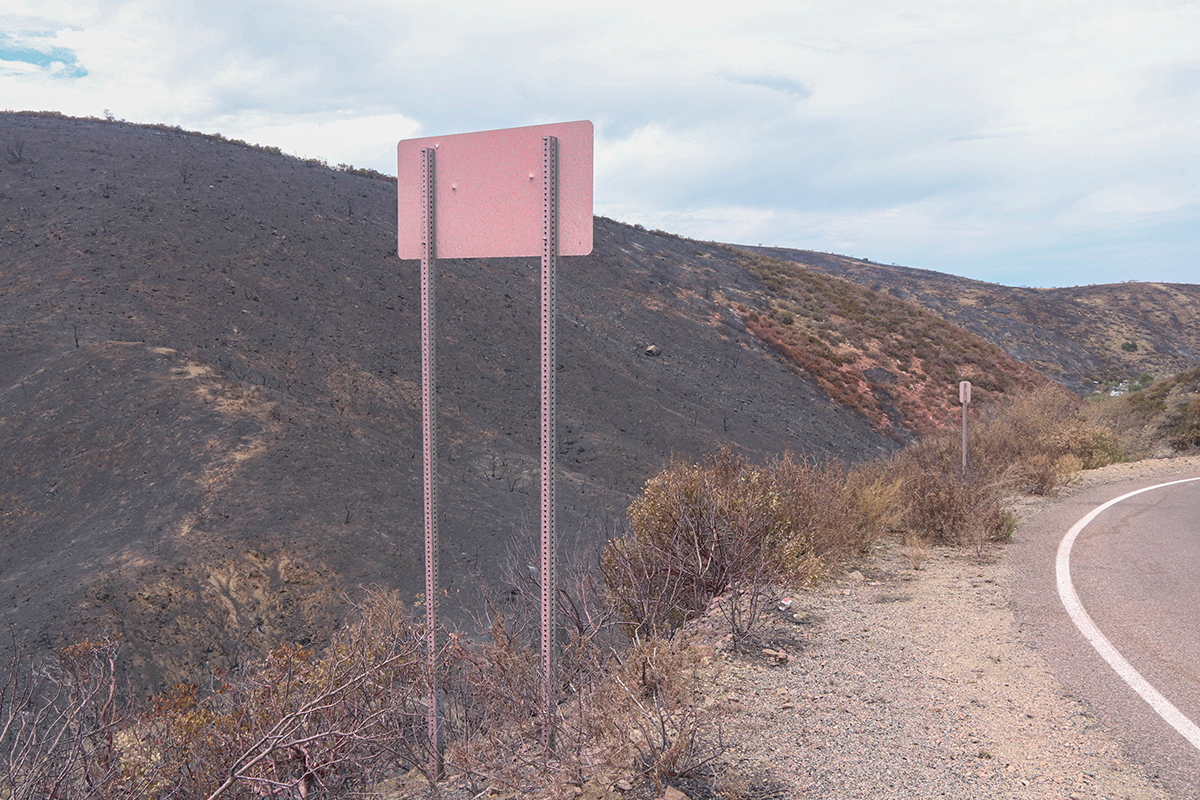 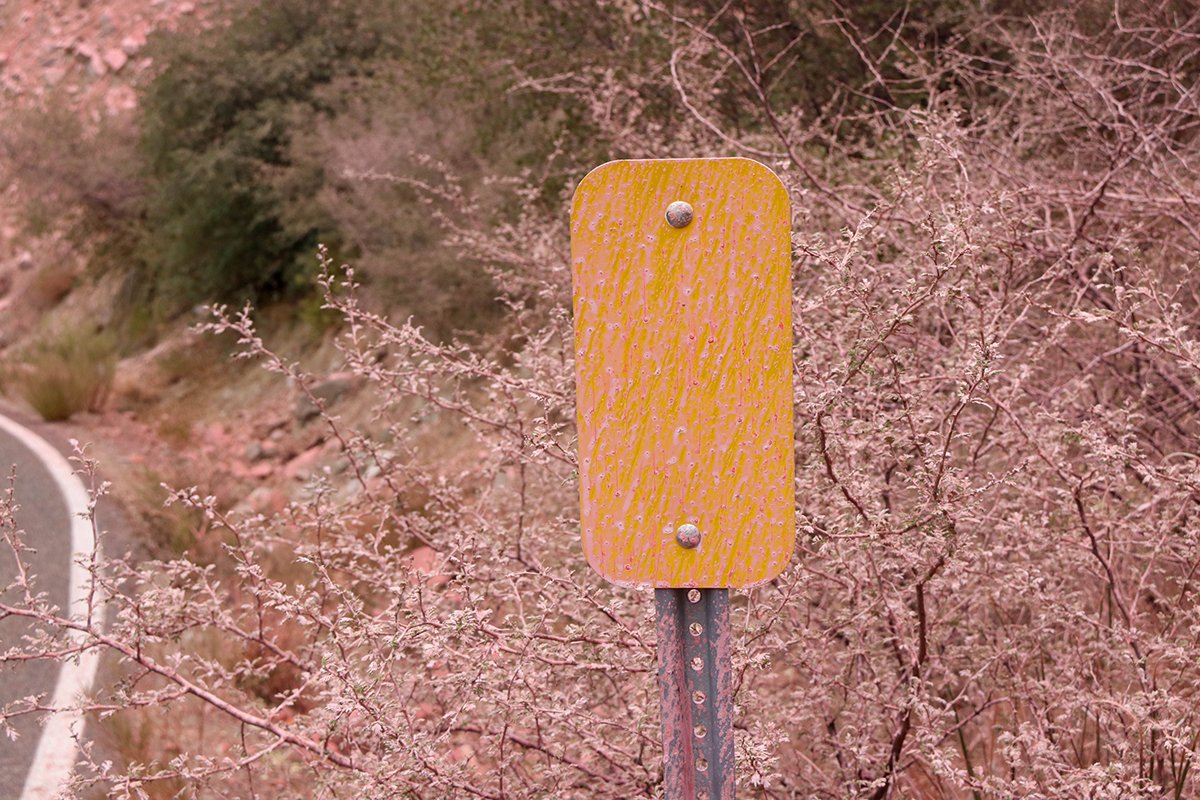 From left: Plants, rocks and road signs along Russell Road, which is closed because of proximity to the Telegraph Fire, are covered in a pink retardant dropped by firefighters battling one of Arizona’s largest wildfires. (Photos by Gianluca D’Elia/Cronkite News)

Firefighters from as far away as Madras, Oregon, have responded to the Telegraph Fire. Bob Sjolund, division supervisor of Northwest Team 6, has spent the past two weeks on the fire lines. He said both residents of nearby towns and the ecosystem itself are awaiting rainfall from monsoon storms.

“The landscape, the animals need that to happen to give it a fresh start,” he said.

“The big picture here is that folks who do put their homes in the urban interface, it is a challenge for wildland firefighters.” 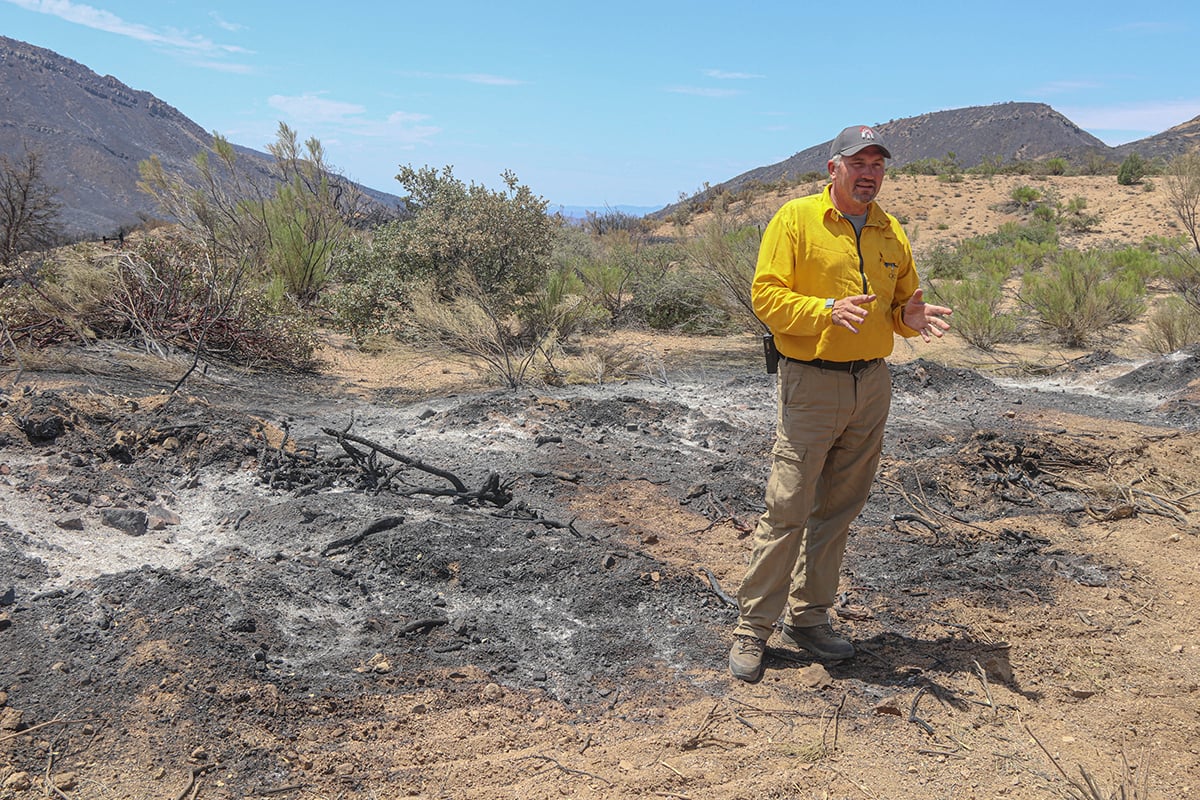 The Telegraph Fire “came across the landscape as a wind-driven fire when it found the right fuels, the right day, mixed with the high heat they had in the region here,” says Bob Sjolund, part of a response team that came to Arizona from Oregon. “It was the perfect combination for what they call a perfect storm.” (Photo by Gianluca D’Elia/Cronkite News)

The fire led to “Go” orders – the evacuation stage of Arizona’s “Ready, Set, Go” emergency system – in several communities throughout the month. More than 25 areas near the Telegraph Fire remain under “Ready” or “Set” statuses.

The fire’s cause still is under investigation, but Hunter and Price said it likely was started by human activity. 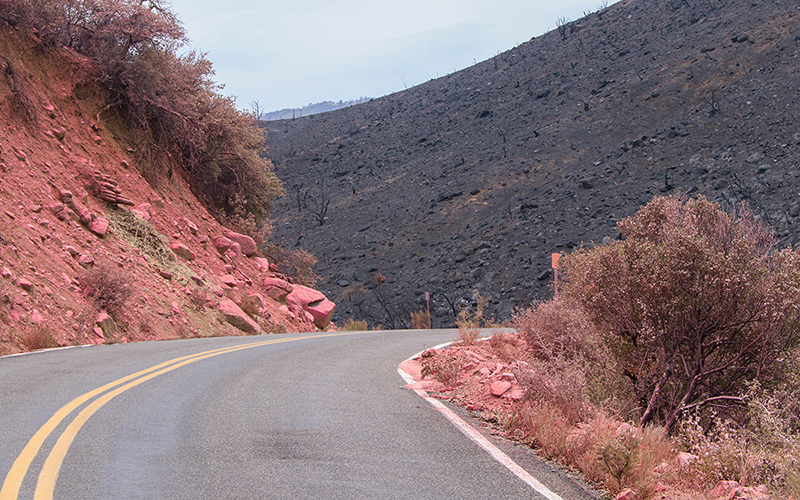 Bright pink fire retardant, which includes a fertilizer to help the soil retain its moisture, coats a stretch of highway near Globe. (Photo by Gianluca D’Elia/Cronkite News) 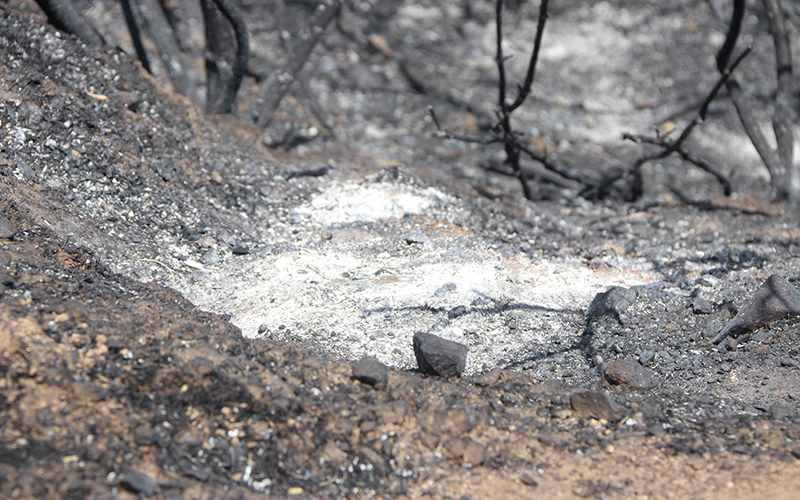 Ashes cover the ground across parts of Globe and the Tonto National Forest in Gila County. (Photo by Gianluca D’Elia/Cronkite News) 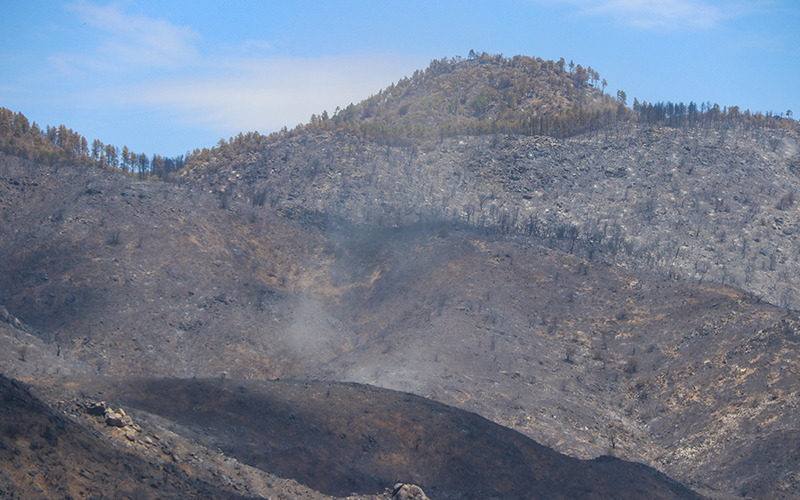 Ashes picked up by the wind often form dust devils, which can easily be mistaken for smoke clouds, according to firefighters battling the Telegraph Fire. (Photo by Gianluca D’Elia/Cronkite News) 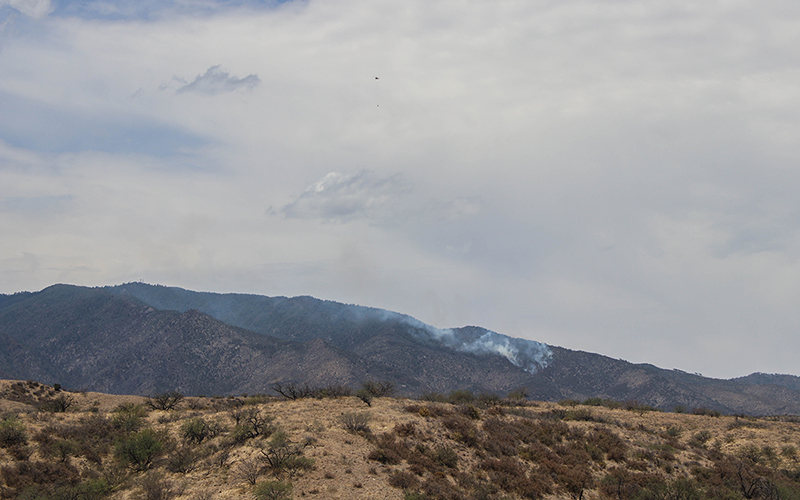 In the distance, a helicopter drops water over one of the last active areas of the Telegraph Fire near Globe. The blaze was 89% contained as of Thursday afternoon. (Photo by Gianluca D’Elia/Cronkite News) 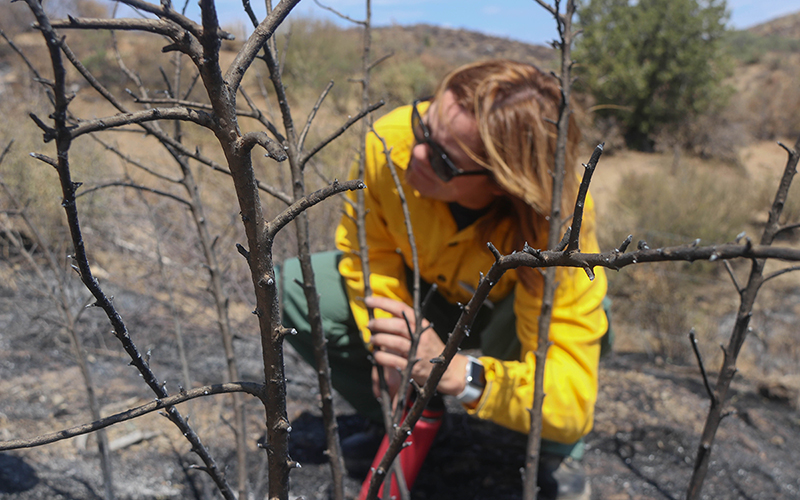 Fire ecologist Molly Hunter says plants in the Tonto National Forest developed to survive wildfires. “Even though the tops look all black, it’s likely they are going to resprout once we get any significant rainfall.” (Photo by Gianluca D’Elia/Cronkite News)