PHOENIX – Sam Wang started keeping his “anti-epidemic diary” in May 2020.

The first images show grateful medical personnel from health centers like Mountain Park and Dignity and Valleywise. Then, the nursing home staff from Pennington Gardens and Friendship Village, followed by police officers and firefighters from Phoenix, Chandler and Scottsdale.

Centered in every photograph are stacks of cardboard boxes, covered in tape and rumpled around the edges from their transoceanic travel, carrying thousands of surgical masks made by Sanjiao Oral Health Co. in China.

In the first months of the pandemic, when demand for personal protective equipment (PPE) far exceeded supply, Wang helped lead a group called Chinese Americans COVID-19 Relief AZ, whose 40 volunteers used their language and organizational skills to secure 158,000 masks from China for communities in Arizona. Their efforts were supported by over $80,000 in donations, including almost $20,000 from area Chinese restaurants.

Those shipments helped Arizona’s frontline workers fight early surges of COVID-19. They reached the state despite a fragmented supply chain, demonstrating the effectiveness of local-level diplomacy.

“We have a big group that’s doing something I think is remarkable, so I want to write it down,” Wang, an agricultural scientist, wrote in a May 2020 entry in his journal. “That’s why some part of the journal is pretty detailed; I tried to put everybody’s name, whoever contributed, in there.” 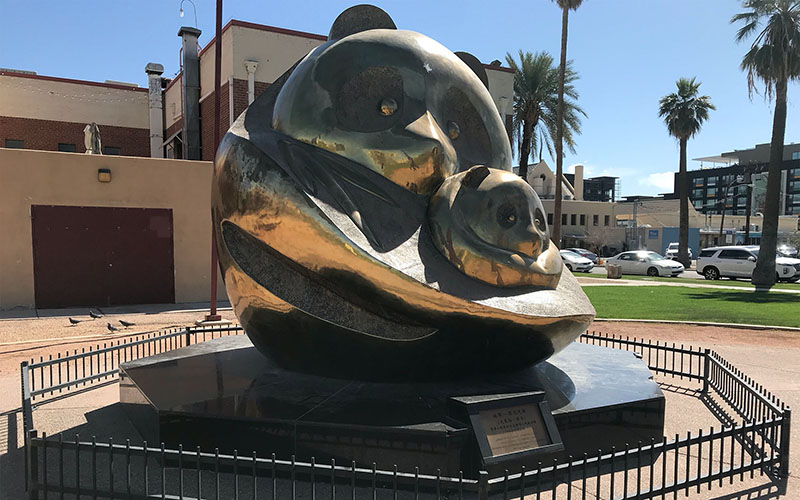 Between its inception on March 17, 2020, and its final donation to the Scottsdale Police Department on July 22, the group surmounted numerous logistical obstacles, including fickle regulations on international pandemic-related commerce. Several boxes were detained for failing to conform to marking requirements enacted after the group had already ordered them.

“When this world (is) in crisis — everybody in the panic mode — we are impacted, right?” said Susan Liu, an engineering manager at Intel who helped lead the donations. “I think as a part of the community we were in the situation (where) we feel we need to do something to help the community get better.”

When Chinese Americans COVID-19 Relief AZ began fundraising, no one expected the donations or the pandemic to continue for so long. But the group’s history is meticulously preserved, in part because it communicated over the Chinese messaging app WeChat, and because of Wang’s journal.

Here’s where Wang begins: On March 17, 2020, Dr. Qun Lu of the Mayo Clinic mentioned in an investment-focused Chinese chat group that hospitals were suffering severe PPE shortages. Wang started a separate chat with Lu and three other chatroom members to organize donations to medical facilities in Arizona.

The group ballooned in size that night, and Wang quickly realized he would need a nonprofit organization. He connected with Liu, who introduced the group to Hope Chinese School, the nonprofit where she had volunteered for 10 years.

She said the school’s board members became “the backbone,” providing “legal liability work and accounting work, along with chipping in on the donations.” Liu herself coordinated the group’s donations, uniting several WeChat groups and leading regular Zoom meetings.

On March 19, two days after the group started, Mountain Park Health Center became the first facility to agree to a donation. The next day, Angel Wang joined the volunteers to lead English-language public relations. 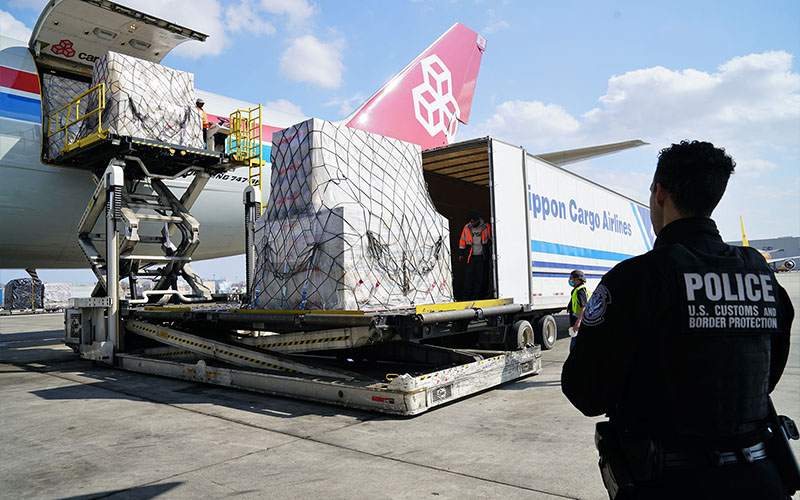 A Customs and Border Protection officer monitors the deliver of a planeload of personal protective equipment (PPE) from China at O’Hare International Airport in Chicago in April 2020. PPE was in high demand and short supply at the outset of the pandemic. (Photo by Alexis Hall/FEMA)

Before the volunteers could get good PR, they had to get good PPE. Liu estimated that they tested over 100 vendors to ensure quality.

“The first 10 days or 20 days,” Angel Wang said, “every night was, ‘Let’s talk about which vendors to select. Did they pass this test? They didn’t send in this paper yet.’”

The group placed an initial order for 100,000 surgical masks from Sanjiao. PPE had become so scarce by the time the masks arrived on April 3, 2020, that Liu remembers joking that whoever received the first masks would be “the richest person in the world.”

That night, after completing her shift at the Mayo Clinic, Lu tested the equipment once more, so the group could make its first donations to Mountain Park, Dignity Health, Banner Health and more.

Meanwhile, the group wrangled a second shipment with the help of a new ally in Nanjing, China: Yang Wang. He and his business partner, Yusheng Huang, understood the urgency of the donations, working late hours and forgoing commissions to aid people they barely knew, Angel Wang said.

“They are really a blessing for us, and they work day and night and help us, and charge us as low as they can because they know that we are doing the donations,” Sam Wang said. 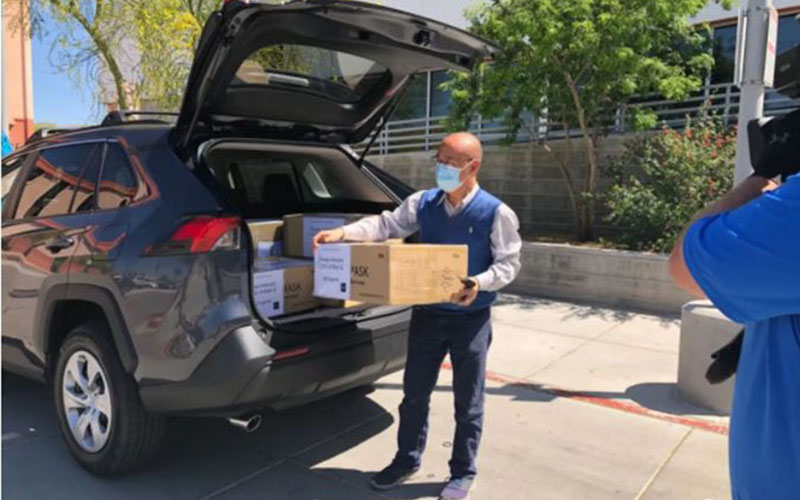 As thanks, the group sent Yang Wang a strawberry cake declaring him “the most handsome mask male god” – the Chinese expression “male god” refers to an exceptionally charming man.

But even the male god could not save the second shipment. Late in April 2020, multiple orders stalled in customs after the Chinese government retroactively applied a new box-marking policy to masks that had already been ordered.

The volunteers reached out to Rick Gerrard, vice president of Phoenix Sister Cities, which has a sister city relationship with Chengdu. That set off another flurry of exchanges.

“One night, I got CC’d on like five emails,” Angel Wang said. “Rick is there, all the rest of the people I don’t even know, I have no clue who they are, and then just one lady replied (to) me.”

It was Xiaoli Pan, a commercial specialist with the American consulate in Shanghai. Angel Wang explained her quandary: 23,000 masks had been missing since April 24, lost somewhere between the two countries, and UPS had no idea where they were.

After months of work with the group’s shipping agent, the wayward masks were found in customs on July 8, only to determine that they had to be returned to China and reshipped. They arrived four days later, and the group concluded its mission with donations to police and fire departments.

But logistical obstacles were not the only challenge faced by the group. While the PPE distributions helped the group gain local support, the volunteers said they could not escape growing anti-Asian racism.

Not all of the PPE was mass produced. Stormie Perdash, who lives near the Fort Hall Indian Reservation in Idaho, had already made 1,000 face masks and shipped them across the U.S. by May 2020. (Photo courtesy of Stormie Perdash)

Sam Wang was at a Fry’s grocery store getting bottled water to include with masks and hand sanitizer for a donation to the Navajo Nation on April 26 when, as one clerk helped him, another pointedly asked, “What do you think about the pandemic from China?”

In his journal, Wang called it “the most unpleasant scene” of the pandemic.

“From the way he talks, and from his (facial) expression,” he said, “you know he tried to kind of provoke me to say something.”

Reflecting on their efforts earlier this year, however, the group said incidents like that grocery store encounter were an exception. At a meeting in February, their first time together since the end of the project, they focused instead on the kindness of people like the “mask male god” and Pan from the consulate, and on the bonds they formed with each other.

“It touched me so much, to see everyone is so caring,” Angel Wang said. “It doesn’t matter how long we haven’t connected to each other, when we see each other I still feel they’re my friends, just like that.”