Adjusting to time zones often means sleeping on planes, as members of Team USA, including former Coyotes standout Jeremy Roenick, right, did in 1991. The Coyotes’ move to the Central Division this season could actually benefit the team physiologically, experts say. (Photo by Bruce Bennett Studios via Getty Images Studios/Getty Images)

PHOENIX – The Arizona Coyotes will slide over to the Central Division for the NHL’s 2021-22 season after more than two decades in the Pacific Division. With the recent additions of the Vegas Golden Knights and the Seattle Kraken, the Coyotes’ move signifies a westward shift in the NHL’s center of gravity.

The team will now be playing a much greater proportion of their games against Central Division opponents, including Minnesota and Winnipeg, who are, on average, more than 400 miles farther away than the Coyotes’ past Pacific Division rivals.

“To me, it never made sense,” said Robby Leaño, host of the Locked On Coyotes podcast. “They’re still so close to all the other teams in the Pacific.”

“They were the team at a disadvantage,” Forest said. “But now, in the Central Division, they will be the team that is the most westward. So everyone else will be at (a) disadvantage.”

Forest is a professor at the Université du Québec en Outaouais who studies the science of sleep. With Jonathan Roy, she co-authored a 2017 paper analyzing the winning percentages of road teams in major professional sports leagues. They found that NBA and NHL teams who had traveled westward won a significantly lower percentage of evening games than those who had traveled eastward, a pattern they attributed to disruptions in the time-based circadian rhythms that influence human physical activity.

“We know now that trends in some of sports performance also have that kind of rhythm,” Forest said, “and for most people, there is a peak in performance at the end of the afternoon.”

As Roy and Forest outlined in the study, physical performance reaches its apex for most people between 3 and 6 p.m. Because of time zone changes, the body clocks of players that travel west are later than those of their opponents. So a western home team’s players may be playing at their circadian peak, while their opponents’ bodies are “ready to go to bed,” Forest said. In 2021-22, the Coyotes will play more of their home games against discombobulated Central Time foes.

Crossing time zones also causes some degradation in statistical performance, travel direction notwithstanding. Andrew McHill and Evan Chinoy used the 2020 NBA bubble, fully played at a neutral site, as a “natural experiment” to assess the effects of home-field advantage in a normal NBA season. They found that teams that had to travel declined in “effort” stats, such as offensive rebounding, even within a single time zone, which they attributed to sleep deprivation. Across time zones, the effects of circadian changes also became clear.

“Going across time zones, we saw that those effort stats were still decreased,” McHill said, “but also the precision stats, like shooting, decreased.”

Like Forest’s, McHill’s study also found a substantial drop in win percentage for teams traveling westward, and he noted that with hockey’s comparable travel schedule to basketball, the Coyotes’ move “could be beneficial, according to our data.” 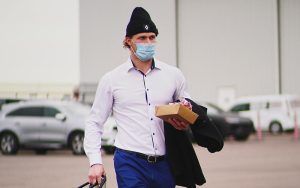 Traveling is part of the job when you play in the NHL. Coyotes defenseman Jakob Chychrun and his teammates will log more miles during the 2021-22 season now that they have moved to the Central Division. (Photo courtesy of Arizona Coyotes)

Crucially, Forest’s study showed no effect of travel direction on win percentage in afternoon games, when the circadian peak does not come into play. But the NHL is unlikely to level the playing field by scheduling games earlier, Forest said.

“The problem is that nobody is at home to watch the game on TV at 2 in the afternoon,” she said.

Even the evening games against Central Division opponents might be hard for Coyotes fans to watch this season, said Leaño, who’s concerned about the prospect of games starting at 5 p.m. Phoenix time.

“Around then, most of the people are getting off work … some people probably won’t get home until mid-second period,” they said. “They’ve already missed half the game.”

A spokesman for Bally Sports Arizona said it’s too early to know what next season holds for Coyotes programming because the NHL hasn’t released its schedule. Indeed, the NHL has to build a new scheduling formula because it’s been operating with 31 teams since Vegas entered the league.

In 2013, Brian Macdonald and Bill Pulleyblank, then both professors at the U.S. Military Academy at West Point, created a quantitative analysis framework to evaluate the effect of division realignment on cumulative team travel. The researchers were able to generate thousands of league structures subject to various qualitative restrictions, such as keeping pairs of rivals together or limiting divisions to two time zones, from which schedules then could be formed.

“You could imagine filtering in Excel, essentially, based on whatever constraints a league office might want to have,” Macdonald said.

The impetus for the West Point paper was another NHL realignment: the Atlanta Thrashers’ move to Winnipeg, after which they briefly remained in the Southeast Division, causing huge headaches for divisional foes.

“Everyone that used to go through Atlanta, and it used to be a pretty good schedule,” Pulleyblank said, “now had to hop on the plane, fly way up over the Canadian border, play one game, and then fly back some other place.”

He added that for Winnipeg, it wasn’t nearly as bad, because they could knock out their closely clustered Southeast opponents in a single road trip.

The Coyotes may now be able to do the same on a smaller scale. Though the team may be two hours apart from their Central Time opponents during Daylight Saving Time, violating the possible two-time-zone constraint, Pulleyblank said the league can mitigate this effect too with appropriate scheduling.

Some possible NBA alignments in Macdonald and Pulleyblank’s 2013 work grouped the Phoenix Suns with more central teams. The addition of the Golden Knights and Kraken to the NHL has now put the Coyotes in a similar position, and Macdonald said “it wouldn’t make sense to move anyone else into the Central Division.”

Leaño said they would have preferred “the simplest decision,” moving Calgary and Edmonton to the Central and Colorado back to the Pacific; Macdonald, however, said this made “less sense” under his model than putting Phoenix in the Central.

Some in the media speculated when the Coyotes’ move was announced that it could lay the groundwork for a relocation to a more central location like Houston.

“I see a lot of flaws in those rumors,” Leaño said. They pointed out that Commissioner Gary Bettman wants the Coyotes in Arizona, and that owner Alex Meruelo’s ties to Las Vegas make it unlikely that he would move the team further away.

Ultimately, despite all the off-ice factors, even Leaño – ”a West Coast person at heart” who has “always loved watching teams battle through the West” – said they will relish the on-ice competition in the Central Division.

“I’m a huge fan of superstars, so to be able to see the Coyotes play Nathan MacKinnon a lot more, and Kirill Kaprizov, that rookie out of Minnesota – and to see them play more often? I can’t complain.” 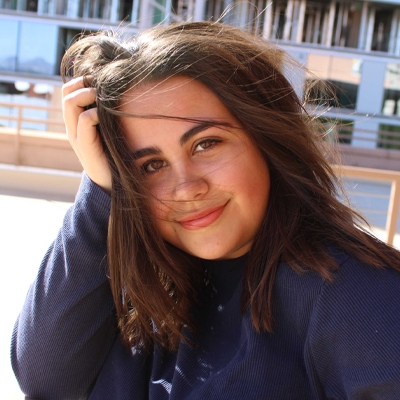 Kylee Golden expects to graduate in August 2021 with a bachelor’s degree in sports journalism. Golden also is a public relations intern for Between the Lines Sports.