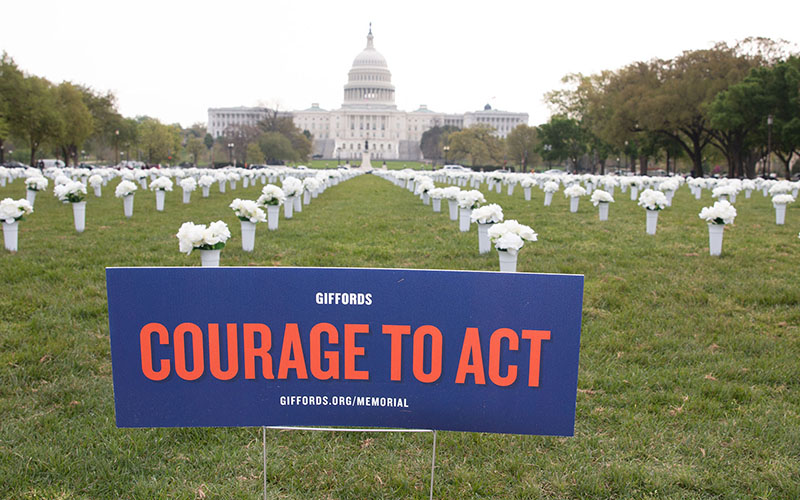 The gun violence memorial on the National Mall includes 40,000 white, silk roses that are meant to represent the roughly 40,000 people who are killed by firearms in the United States every year. (Photo by Ryan Knappenberger/Cronkite News) 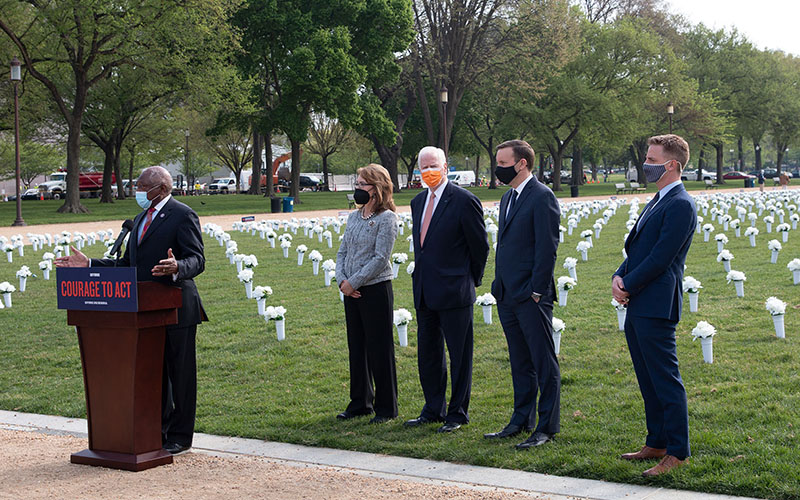 Rep. James Clyburn, D-S.C., at the podium, said at the event on the National Mall that the Bipartisan Background Check Act could close a loophole that allowed Dylann Roof to get the gun he used to kill eight in a 2015 church shooting. (Photo by Ryan Knappenberger/Cronkite News) 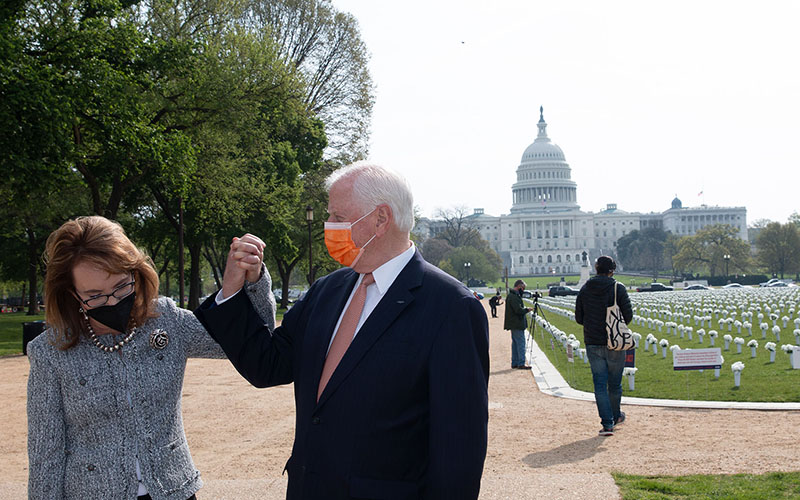 WASHINGTON – Backed by a field of flowers that represent the thousands killed by gun violence each year, former Arizona Rep. Gabrielle Giffords said Wednesday that Congress can act on gun reform or “can let the shooting continue.”

Giffords, who was severely wounded by a gunman in a 2011 mass shooting, joined congressional Democrats to call for Senate action on the Bipartisan Background Checks Act, a House bill that would stiffen checks on gun buyers.

The bill has yet to get a hearing in the Senate since it passed the House in March – a period during which 80 people were killed in mass shootings in the U.S., according to the Gun Violence Archive.

“We are at a crossroads,” Giffords said. “We can let the shooting continue, or we can act.”

The news conference came almost a week after President Joe Biden unveiled a series of steps aimed at curbing gun violence, by making it easier for states to adopt “red flag” laws, which keep guns out of the hands of those who are a danger to themselves or others, and by stiffening restrictions on “ghost guns” – those assembled from kits which are almost impossible to trace.

Biden also proposed new restrictions on gun modifications that allow a pistol to fire like a semi-automatic gun – a modification that was used by the shooter in the March 22 attack that killed 10 at a King Soopers grocery in Boulder, Colorado. 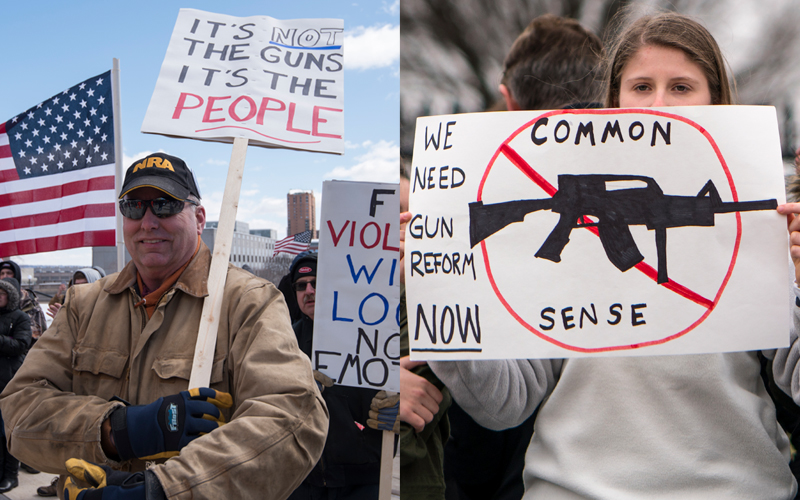 “We want to treat pistols modified with stabilizing braces with the seriousness they deserve,” Biden said. “Essentially, it makes that pistol a hell of a lot more accurate and a mini-rifle.”

But whatever changes the federal government makes could hit a wall in Arizona, where Gov. Doug Ducey last week signed the 2nd Amendment Firearm Freedom Act into law. It preempts federal law by making it illegal to use state funds or personnel to “enforce, administer or cooperate with any act” that is more restrictive than current state laws.

The bill, sponsored by Rep. Leo Biasiucci, R-Lake Havasu, passed both chambers of the Legislature on largely party-line votes. In a series of tweets after Ducey signed it into law, Biasiucci, called the law an “extra layer of protection” that makes Arizona a “2nd Amendment Sanctuary.”

The vote on HR 8, the federal background check bill, also fell mostly along party lines, with just eight Republicans supporting it and only one Democrat voting against it. Critics, like Rep. Debbie Lesko, R-Peoria, call the bill an “assault on our Second Amendment right to keep and bear arms.”

“The bill turns law-abiding citizens into criminals by subjecting them to criminal penalties for simply lending a friend or a neighbor a gun on a temporary basis,” Lesko said on the House floor before the March 10 vote.

Since that vote, there have been a series of unrelated mass shootings across the country that have grabbed headlines.

Before the King Soopers shooting there was the March 16 shootings at several Atlanta-area spas that killed eight people, including six Asian-American women, and an apparent family dispute the same day in Phoenix that left four dead. On April 8, a former NFL player killed five people in Rock Hill, South Carolina, before killing himself.

The shooter in Atlanta bought his gun the day of the attack, as Georgia – like Colorado and Arizona – does not have a waiting period between a gun purchase and delivery.

Speakers at the Giffords event included House Speaker Nancy Pelosi, who noted the toll of gun violence by pointing to the 40,000 flowers on the National Mall behind her, about the number of firearm deaths in a year, according to the Centers for Disease Control and Prevention.

“It takes your breath away to see the beauty of this art installation, but gun violence takes away the breath of so many people,” Pelosi said.

The Bipartisan Background Checks Act of 2021 would close a loophole that lets someone buy a firearm at a gun show or online without undergoing a background check.

It also targets the “Charleston loophole” that let an individual flagged for investigation by the FBI still get a gun, because the background check on him had not been finished within three days of his purchase. Dylann Roof used that gun to kill nine worshipers in 2015 after a Bible study at the Emanuel African Methodist Episcopal Church, a historic Black church in Charleston.

Rep. James Clyburn, D-S.C., said that extending the waiting period beyond three days could have saved the lives of those victims.

Giffords survived a Jan. 8, 2011, assassination attempt at a constituent event outside a Tucson supermarket that killed six people and left 13 injured, including Giffords. She has since worked for gun reform, starting Giffords.org to work toward tighter gun laws. And she said Wednesday she plans to keep fighting.

“I’ve known the darkest of days, days of pain and uncertain recovery, but confronted by despair I’ve summoned hope,” Giffords said. “I put one foot in front of the other, I found one word and then I found another.”