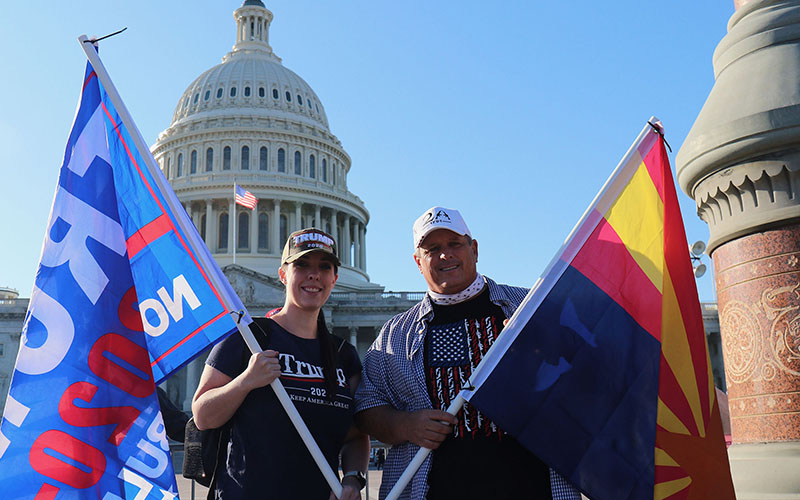 Chelsea Pajak and her dad, Michael Waldbillig, came from Tucson just so they could attend Saturday’s march. (Photo by Chase Hunter/Cronkite News) 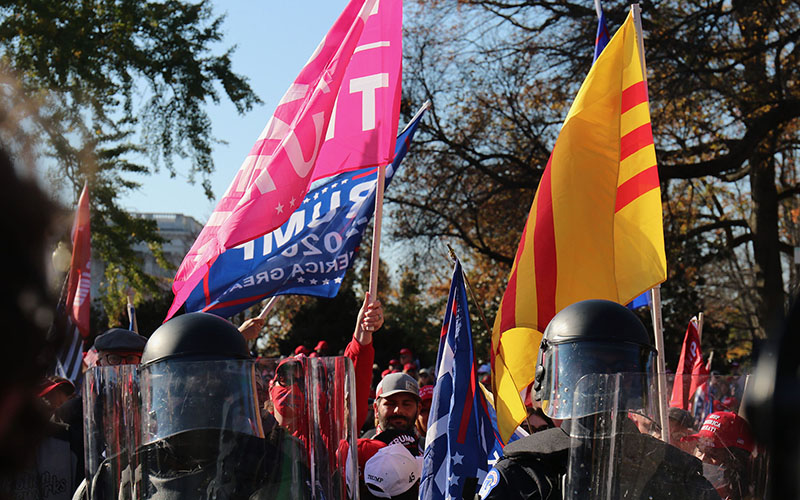 Helmeted police form a line between Trump supporters and a smaller number of counter protesters. Despite some tension, the rally itself remained largely peaceful. Some confrontations broke out later. (Photo by Chase Hunter/Cronkite News)

WASHINGTON – Tens of thousands of people turned the streets of Washington into a sea of flags and banners Saturday, marching and chanting in support of an embattled President Donald Trump as his election chances falter.

The march went under a number of different names – Million MAGA March, Stop the Steal and March for Trump, among others – but they all had the same goal: To show support for the president and decry what they see as questionable election results.

“I wanted to come out to show my president that I appreciate him and that I support his cause in pursuing a true and fair election,” said Chelsea Pajak, a Tucson resident who heard about the march Monday and talked her dad into flying to D.C. to be part of it.

It looked much like a Trump rally without Trump – although the president’s motorcade was cheered by the crowd as he drove by on his way to and from a golf outing at his club in Northern Virginia.

The event began under cloudless skies on a crisp fall day with speeches at Freedom Plaza, just two blocks from the White House. The crowds then marched down Pennsylvania Avenue, almost filling a mile-long stretch of street to Capitol Hill and the Supreme Court, where more speakers took the stage.

While the rhetoric from the stage was often fiery – referring to Trump’s looming election loss as a coup and a fraud that demands a “second American revolution” – the crowd was upbeat. The daylong rally was mostly peaceful, although there were news reports of scattered confrontations around Washington after the sun went down. Metropolitan Police reported 21 arrests overnight.

The rally comes as major media outlets have declared Democrat Joe Biden the president-elect, with 306 Electoral College votes – 36 more than needed – to Trump’s 232. Unofficial vote tallies give Biden 78.6 million votes to 73 million for Trump, both records for a sitting president and a challenger.

The news that Biden had apparently clinched the election led to spontaneous celebrations a week earlier, when Washington residents poured into the streets to celebrate, shouting, dancing, popping champagne corks and honking horns.

Trump has refused to concede, repeatedly tweeting claims of voting improprieties with mail-in ballots, voting machines, voter fraud, vote processing, ballot theft – none of which he has supported with evidence and many of which have been flagged by Twitter as questionable.

In response to the election results, the Trump campaign, along with state and national Republican parties, have filed lawsuits in battleground states around the country. Those include at least two in Arizona, where social media rumors circulated that Sharpie markers distributed by Maricopa County poll workers would invalidate ballots. The secretary of state and attorney general’s offices both forcefully refuted the “Sharpie-gate” claims.

A related lawsuit by the campaign and the parties claimed the Sharpie-caused “overvotes” led to ballots being erroneously rejected. But the attorney in that case conceded Friday that it was largely moot for the presidential race, as fewer than 200 ballots were involved in a state where Trump trails by 10,016 votes with just 1,700 left to be counted.

But the Arizona Republican Party was back in court Thursday with a suit claiming that the process by which Maricopa County audits election returns violates state law. No hearing has been held in that case.

As the campaign’s challenges to the election began to build last week, grassroots organizers like Kylie Kremer, executive director of Women for America First, began planning for the “March for Trump.” Its goal was to demonstrate concern about possible voter irregularities in swing states.

CORRECTION: A previous version of this story misspelled Michael Waldbillig’s name in grafs 20 and 28. The story has been corrected, but clients who used earlier versions are asked to run the correction found here.

“We wanted to show up here in D.C. to say, ‘Thank you, Mr. President, we are here and we are fighting for you and we’re not going to back down,” Kremer said Friday.

The march in Washington was repeated in smaller events around the country, including an Arizona event Saturday at the State Capitol building in Phoenix.

At the Washington event, Make America Great Again hats, shirts, flags and other MAGA merchandise were everywhere, along with American or state flags, signs and banners. Chants of “U.S.A.,” “stop the steal” and “four more years” filled the air along with occasional prayers and patriotic songs.

A heavy police presence was on hand, but concerns of rally-related violence did not materialize during the event. Trump supporters did square off verbally with a small group of counter protesters who were kept mostly to one side of the event by police in riot gear, who set up a line of officers between the two groups.

Pajak said she was not concerned by the presence of counter protesters.

“I respect other people’s beliefs especially when we can have civil discourse and if that doesn’t happen then I won’t involve myself,” Pajak said.

She and her dad, Michael Waldbillig, said that while they support the president, they were marching Saturday because they are more concerned about the process. Waldbillig said he wanted to show up to promote a “free and fair” election.

Trump flags - and hats and shirts and more - were popular accessories at the pro-Trump march in Washington. (Photo by Chase Hunter/Cronkite News)

Crowds marched from Freedom Plaza near the White House, down Pennsylvania Avenue to Capitol Hill and the Supreme Court. (Photo by Chase Hunter/Cronkite News)

A Metropolitan Police officer stands between pro-Trump protesters and counter protesters outside the Supreme Court on Saturday. (Photo by Chase Hunter/Cronkite News)

Tucson resident Michael Waldbillig, in white hat, and his daughter, Chelsea Pajak, chat with other Trump supporters as they march down Pennsylvania Avenue. (Photo by Chase Hunter/Cronkite News)

The MAGA March brought out the usual number of costumed characters. (Photo by Chsse Hunter/Cronkite News)

Crowds of Trump supporters lean over a fence outside the Supreme Court to jeer counter protesters who were kept on the other side of the barricade by police. (Photo by Chase Hunter/Cronkite News)

Crowds decked out in Trump gear - and patriotic hats - carried a sea of flags as they marched down Pennsylvania Avenue to Capitol Hill. (Photo by Chase Hunter/Cronkite News)

Tens of thousands marched at the Trump rally, which went by several names, before ending up outside the Supreme Court for an afternoon of speeches. (Photo by Chase Hunter/Cronkite News)

That was echoed by a Gilbert family, who declined to give their name as they stood at the Supreme Court under an Arizona flag emblazoned with the “don’t tread on me” snake logo.

“It’s not about the president … it’s about the Constitution,” said the son, who identified himself only as Alex H.

Looking around the rally, Pajak said she has hope for the future.

“I do think that the level of camaraderie we’ve felt can change the future,” she said. But she is also realistic. She knows Saturday’s rallies are unlikely to change the outcome of the election.

“Regardless of the outcome, I greatly appreciate everything he’s done for everyone,” she said.

Her dad said that no matter the outcome, he would respect the final results – until the next election.

“If it’s President Trump, great,” Waldbillig said. “If it’s Joe Biden we’ll support him, encourage him to do what’s right and try to vote him out of office in four years.”