A supporter of President Donald Trump, with megaphone, is surrounded by Trump opponents near the White House Friday. Trump, and his supporters, have refused to concede the election even though President-elect Joe Biden’s lead continues to grow. (Photo by MacKenzie Belley/Cronkite News)

WASHINGTON – The Arizona Republican Party filed a second legal challenge Thursday to Maricopa County’s election returns, even as attorneys for the party were conceding that an earlier suit would not make a difference in the presidential results.

With just 1,700 ballots left to count in Arizona as of Friday evening, President Donald Trump trailed President-elect Joe Biden by 10,016 votes, a gap that “had rendered unnecessary a judicial ruling” on the presidential race, an attorney for the Trump campaign told the court Friday.

But by that time, the party had already mounted a new challenge to the way Maricopa County conducts audits of its election returns.

The Arizona suits are the latest in a nationwide effort by the Trump campaign, which has filed lawsuits across the country to challenge election returns in battleground states as the president has kept up a steady barrage of tweets and statements that call the result into question.

One political analyst said the suits are last-ditch efforts by the campaign that were unlikely to change the outcome of the race.

“The election is done,” said Mike Noble, chief of research at OH Predictive Insights. “They don’t know the answer. They’re just trying to exhaust all options … at the end of the day, one wins, one loses in politics.”

But Trump has refused to concede and stoked unsupported claims that mail-in ballots were misused, voting machines were faulty, elections officials doctored results and more in a torrent of tweets – many of which were flagged by Twitter as containing disputed information.

Arizona has been the target of several of those claims, with state officials first refuting claims that Sharpie markers used to mark ballots in Maricopa County led to the ballots being rejected. Attorney General Mark Brnovich said Wednesday that his office looked into “Sharpie-gate” and found that the use of the markers “did not affect anyone’s vote.”

In the first lawsuit, filed last Saturday, the Trump campaign, the Republican National Committee and the Arizona Republican Party claimed that ink “bleed-throughs” on ballots had led to them being flagged for overvotes, and then mistakenly rejected by poll workers. 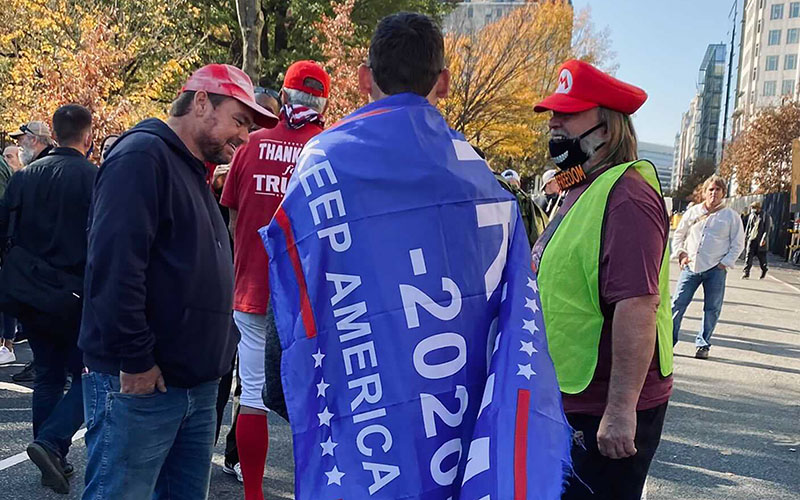 Trump supporters gather Friday in Washington, where several pro-Trump ogranizations are scheduled to rally on Saturday in support of President Donald Trump’s claims of election impropriety that he claims cost him the elections. (Photo by MacKenzie Belley/Cronkite News)

Kiley refused to allow evidence of voter fraud that the GOP had collected through an open online form. And, despite the president’s fraud claims, the Trump campaign’s attorney said the suit was not about fraud but about “good faith errors” by election officials.

But county election officials testified that the ballot tabulating machines in question worked as they should while GOP witnesses, when questioned by attorneys for the county and state, admitted they could not say with certainty that their ballots were rejected, as the suit claimed.

The state’s lawyers also noted that fewer than 200 ballots were in question in the suit, out of more than 3.4 million cast, and accused the campaign of trying to sow distrust and disinformation on an issue that had no chance of reversing the outcome of the election.

The campaign admitted as much Friday, filing a “notice of partial mootness” with Kiley, saying there was no point for the judge to rule on how those ballots affected the presidential race.

“Since the close of yesterday’s hearing, the tabulation of votes statewide has rendered unnecessary a judicial ruling as to the presidential electors,” said the filing from attorney Kory Langhofer.

By Friday, however, a second lawsuit had been filed by the Arizona Republican Party against Fontes and the board of supervisors, charging that their method of doing an audit of returns violates the plain wording of state law.

State law requires that election officials confirm the accuracy of electronically counted ballots with a hand count of ballots in “at least two percent of the precincts in that county.” Because Maricopa County used voting centers this year, and not precincts, it based its audit on 2% of the roughly 175 centers, as opposed to 2% of the 748 precincts.

That process is allowed in the Elections Procedures Manual from the secretary of state, but Arizona GOP Chairwoman Kelli Ward said the manual should not be allowed “to supersede Arizona’s state law,”

“Arizona voters deserve complete assurance that the law will be followed and that only legal votes will be counted,” Ward said in a statement Friday.

But Brnovich’s office, in a letter to legislative leaders, said that a strict reading of the law would mean there would be no audit of ballots in counties that used voting centers because there would be no precincts to draw sample ballots from. “We do not believe the Legislature intended this result,” said the letter, which said the Elections Procedures Manual was well established.

“This is not a new procedure. Since 2012, versions of the EPM drafted by Secretaries of State Ken Bennett, Michele Reagan and Katie Hobbs have addressed voting centers with respect to the hand count audit procedure,” said the letter from Chief Deputy Joseph Kanefield. “The most current version of the EPM provides that ‘(i)n counties that utilize vote centers, each vote center is considered to be a precinct/polling location,'”

Requests for comment Friday from Hobbs, Fontes and the Arizona Democratic Party were not immediately returned. But Noble said those officials should not worry about losing in court, and if they do it is not likely to affect the final outcome of the election.

“The result is the result,” Noble said. “I would be quite surprised if it (the latest GOP lawsuit) changes the results, at least for Arizona.”

Allen Awfe is a New York native who expects to graduate in spring 2021 with a bachelor’s degree in journalism and a minor in political science. Awfe primarily works as a digital reporter on the politics beat for Cronkite News, and Arabic is his second language. He has done freelance work for several publications in Phoenix.