WASHINGTON – A Navajo Nation probe of a controversial, Navajo-owned hemp operation has turned into a federal investigation into reports of marijuana production, interstate drug trafficking and violations of labor and child labor laws.

The FBI said Monday it had executed search warrants “in the area of Shiprock” in an operation that included nine federal agencies as well as state, tribal and local agencies from at least three states. It released few other details.

“Dineh Benally and his investors sought to take advantage of what they believed to be a jurisdictional gap on the Navajo Nation that would allow them to operate outside the law,” Navajo Nation President Jonathan Nez said in a statement Tuesday.

“They did not count on the diligence or effectiveness of the Navajo Nation Department of Justice to be able to enforce our own laws through our own courts,” Nez’s statement said.

Benally started his hemp operation last year and it now includes over 1,000 greenhouses and spans more than 400 acres in the Four Corners area, according to the Navajo Justice Department. The land is leased from Navajo farmers who formerly used it to raise corn.

Benally appeared to ramp up operations on his farms after the COVID-19 pandemic hit, according to reporting by Searchlight New Mexico, exploiting Chinese workers from California, many of whom said they lost their jobs because of the pandemic.

These reports led Sen. Martin Heinrich, D-New Mexico, to ask the U.S. Attorney for New Mexico to look into “disturbing reports of human trafficking and child labor” on the farms, including “children as young as 10 … reportedly among the vulnerable labor pool, working in hazardous conditions with reports of numerous Navajo Nation Environmental Protection Agency violations.”

Benally’s business stirred up strong feelings in Shiprock, where neighbors protested his operation for much of the summer, according to ongoing reporting by the Navajo Times. Neighbors told the Times that Benally’s operation was illegal, that he was bringing in workers from off the reservation despite the COVID-19 lockdown and they criticized the Navajo Nation for not moving more quickly to investigate Benally. 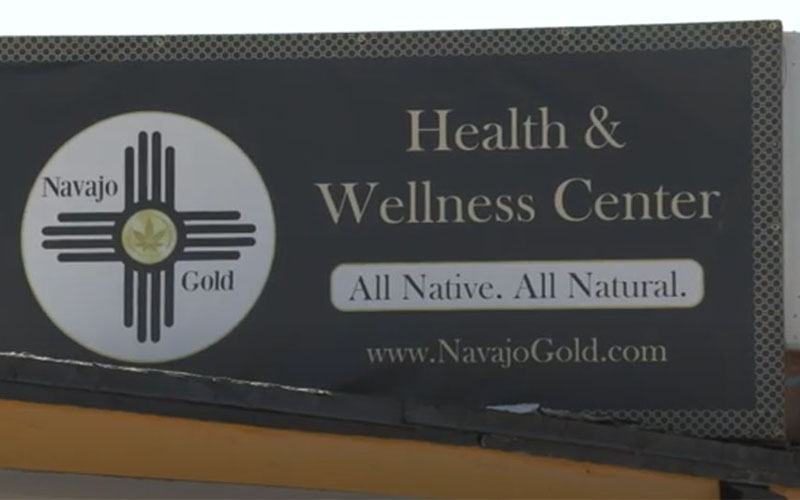 Navajo Gold was the name of the hemp-farming operation run by Dineh Benally on the Navajo Nation. But tribal officials say the hemp operation was never approved, and now tribal and federal officials believe it was used to produce marijuana. (File photo by Marcella Baietto/Cronkite News)

According to documents in that suit, the Navajo Nation does not allow cultivation of cannabis with THC levels above 0.3% and it does not allow hemp production – with the exception of one pilot project – because it has yet to create a regulatory system for the product.

Benally’s attorney could not be reached for comment Tuesday. But in published reports, Benally maintained that his hemp operation is legal, producing only low-THC, over-the-counter products. He claimed he had authority to issue hemp permits as president of the Navajo Nation’s San Juan River Farm Board – a job he lost last week to Beatrice Redfeather-Benally, an outspoken critic.

Benally’s business partner, Irving Lin, said in an October affidavit that he “came to understand that the promises and representations made … to get me to invest in his operation were not true.”

“I have come to realize that the ‘hemp’ permits for which I paid Dineh Benally were in fact complete fabrications as Benally has zero authority to issue any permits on behalf of the Navajo Nation or even the San Juan River Farm Board,” said Lin, a Los Angeles-based real estate agent and investor in Benally’s farm operation.

After it won the temporary restraining order, Navajo officials gained access to Benally’s farms and confirmed some of the neighbor’s other complaints, including that “a significant portion of the crop being grown appeared to be marijuana,” the Navajo Justice Department said. “It became apparent that a significant number of foreign workers had been employed by these operations with significant financial investment.”

Based on “an extensive inspection and review of the farming operations,” the Navajo Environmental Protection Agency believes the operation may have violated tribal and federal EPA regulations.

Despite the court orders, Lin said Benally told him in early October that farm operations were continuing and that scheduled deliveries would go on.

Late last month, the Navajo Nation also sued the 33 farmers whose land Benally leased for his operations. Navajo Nation Attorney General Doreen N. McPaul said the nation “is committed to continuing to work in close coordination with our federal partners while aggressively pursuing justice in the courts of the Navajo Nation.”