Marsha Mueller puts a hand on husband Carl’s shoulder during a ceremony Thursday honoring their daughter, Kayla, who was held hostage and killed by Islamic State terrorists in 2015. The Muellers were at the Goldwater Air National Guard Base in Phoenix for the unveiling of a painting of the raid that killed the leader of ISIS. (Photo by Rob Schumacher/POOL/The Arizona Republic via USA TODAY NETWORK) 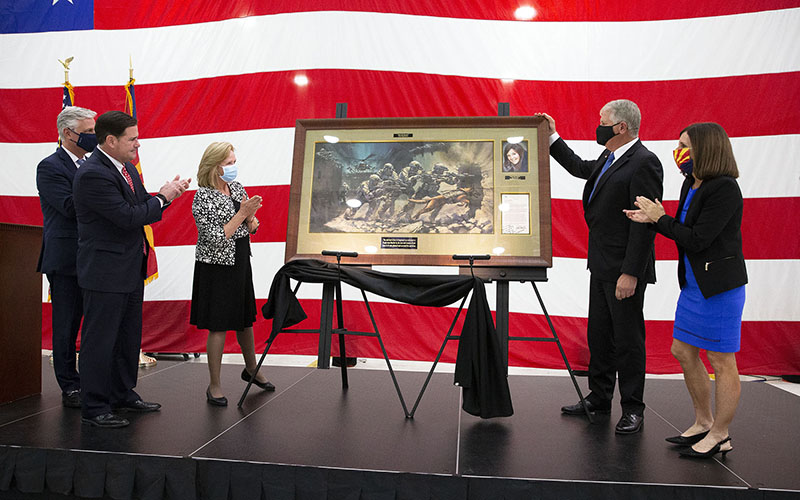 Martha and Carl Mueller unveil the painting “Into the Breach” as, from left National Security Adviser Robert O’Brien, Gov. Doug Ducey and Sen. Martha McSally, R-Arizona, look on during an event at the Goldwater Air National Guard Base in Phoenix Thursday. (Photo by Rob Schumacher/POOL/The Arizona Republic via USA TODAY NETWORK) 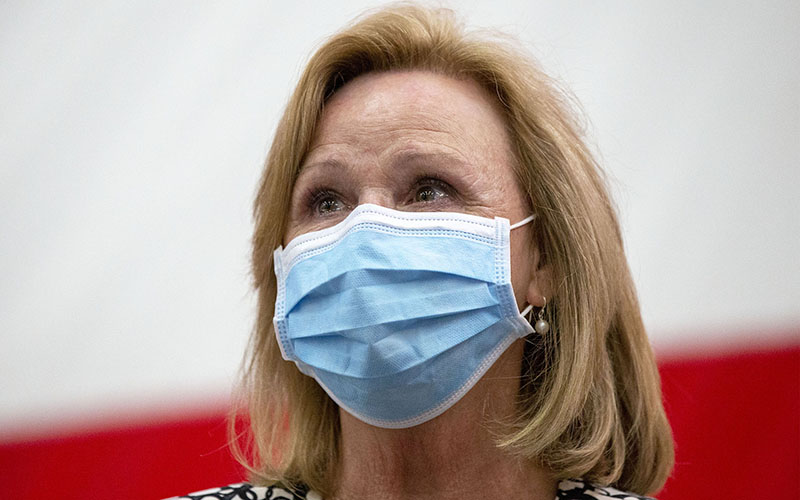 Marsha Mueller during a ceremony honoring her daughter, Kayla, a Prescott native who was captured in Syria by the Islamic State and eventually killed. The Muellers have long been critical of the Obama administration for its handling of her capture by terrorists. (Photo by Rob Schumacher/The Arizona Republic via USA TODAY NETWORK) 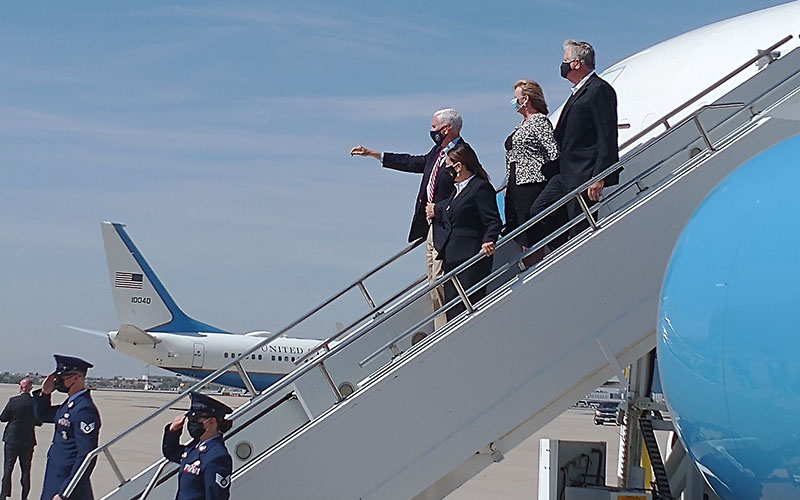 Marsha and Carl Mueller follow Karen Pence and Vice President Mike Pence down the steps of Air Force Two in Phoenix Thursday, after being at the vice presidential debate Wednesday in Salt Lake City. The Muellers were headed to an event honoring their daughter, Kayla, who was kidnapped and killed by the Islamic State in 2015. (Photo by Rob Crilly, Washington Examiner/White House pool)

WASHINGTON – Family friends said Prescott residents Carl and Marsha Mueller are “overwhelmed” by a whirlwind three days that saw the indictment of terrorists accused of killing their daughter, Kayla, whose story was featured in Wednesday’s vice presidential debate.

That was followed by an event in Phoenix Thursday honoring Kayla and, on Friday, the two men charged in connection with her kidnapping and killing are scheduled to be arraigned in a federal court outside Washington.

But the Muellers still don’t know much about their daughter’s death, said the Rev. Kathleen Day, a family friend, and they continue to look for answers.

“There needs to be answers. That is one way that we who love Kayla abide with her and all that she suffered,” Day said. “Her family, they want to know everything. It doesn’t matter how difficult it is to hear.”

A federal court on Wednesday unsealed an indictment against Alexanda Amon Kotey and El Shafee Elsheikh, who are charged with conspiring to kidnap and murder Kayla as part of their support of the Islamic State.

Kayla was doing humanitarian work with Syrian refugees in Turkey in 2013 when she was abducted by ISIS during a short trip into Syria with a co-worker. She was held hostage for 18 months with numerous other Western hostages, some of whom were murdered or beheaded, killings the others were forced to witness.

All the hostages were held for ransom and were subjected to mock executions, beatings and other torture. Kayla, who was killed in 2015, was also raped and forced to marry Abu Bakr al-Baghdadi, the ISIS leader who was killed in a U.S. raid in 2019.

It was that raid that led the Muellers to support President Donald Trump, attending his State of the Union address this year and speaking at the Republican National Convention this summer. The Muellers blame inaction by President Barack Obama and Vice President Joe Biden for Kayla’s death.

And it was the indictment that found the Muellers in Salt Lake City Wednesday as guests of Vice President Mike Pence during his debate with California Sen. Kamala Harris, the Democrats’ vice presidential nominee.

The Obama administration had intelligence about where Kayla was being held, but she was moved days before U.S. military forces raided the site.

“We all believe that Kayla should be here,” Day said Thursday. “There was an opportunity to bring her home.”

Harris responded to Pence’s claim by looking directly at the Muellers in the audience and apologizing for Kayla’s death, saying that Obama and Biden both felt terrible about it.

“What happened to her is awful and it should have never happened,” Harris said, before shifting to the Trump administration’s Middle East policy and his treatment of and rhetoric toward the military.

Carl Mueller said at the RNC in August that, “To this day, we have never heard from Joe Biden.” He charged the Obama administration with showing “more concern for the terrorists in Guantanamo than the American hostages in Syria.”

On Thursday, the Muellers flew with Pence on Air Force Two to Phoenix, where he held a campaign rally and they headed to the Goldwater Air National Guard base for the unveiling of a painting commemorating the raid that killed al-Baghdadi – an assault code-named “Operation Kayla Mueller.” 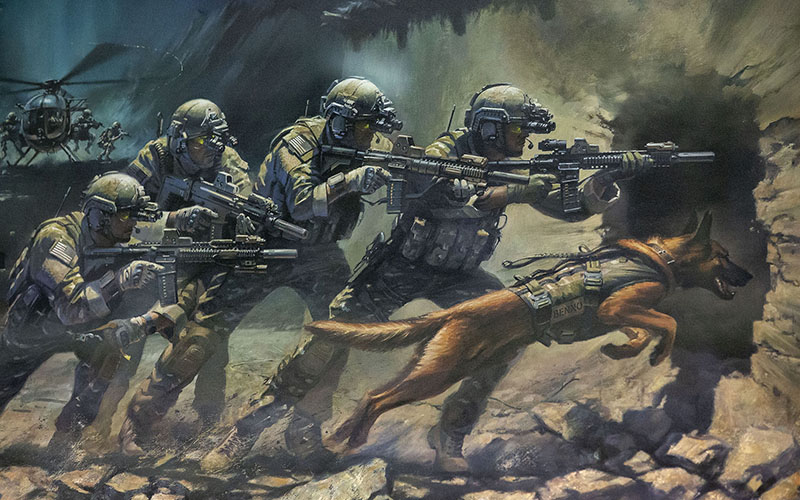 “Into the Breach,” which depicts the 2019 raid that killed ISIS leader Abu Bakr al-Baghdadi, was unveiled Thursday at the Goldwater Air National Guard Base in Phoenix and dedicated to Kayla Mueller, a Prescott native abducted, held and eventually killed by ISIS in 2015. (Photo by Rob Schumacher/The Arizona Republic via USA TODAY NETWORK)

Day provided an opening prayer before the unveiling of “Into the Breach,” which depicts the raid by Task Force 814 – a reference to Kayla’s Aug. 14 birthday. The painting shows Delta Force operators, weapons drawn, advancing into al-Baghdadi’s compound after blowing a hole in the wall. The painting is scheduled to go on public display at the Arizona Capitol.

Gov. Doug Ducey, who was joined at the event by National Security Adviser Robert O’Brien and Sen. Martha McSally, R-Arizona, spoke about Kayla’s legacy as a Christian and a humanitarian.

“With compassion as her shield and love as her weapon, Kayla Mueller was a warrior in every sense, comforting the anguished and serving as a light in the darkness,” Ducey said.

McSally said she hoped the Muellers “can find small comfort in the fact that Arizona and our nation will never forget Kayla and the legacy she left behind her.”

The Muellers could not be reached for comment Thursday, but Day said that bringing Kotey and Elsheikh “to justice … is important.” She said the indictments help “to answer questions for and justice for” the Muellers as well as the families of other slain U.S. hostages, Steven Sotloff, James Wright Foley and Peter Kassig.

“We have to end this cycle of violence around the world and torture. And we have to be a part of that solution,” said Day, a campus minister at Northern Arizona University who worked with Kayla there. “So it’s important that we’re bringing them to justice and we appreciate that the administration continues to lift up Kayla’s story.”