Like many Republicans, Rep. David Schweikert, R-Fountain Hills, praised the the upbeat tone of President Donald Trump’s State of the Union address – a speech many Democrats said ignored or glossed over real problems. (Photo by Christopher Scragg/Cronkite News)

WASHINGTON – For more than an hour Tuesday, President Donald Trump talked about the “Great American Comeback” that has occurred under his administration, in a State of the Union address that Democrats said described instead “a parallel universe.”

Trump’s third State of the Union had all the hallmarks of a campaign speech, including Republican chants of “four more years” and made-for-TV moments like the surprise reunion of a military family and the award of the Presidential Medal of Freedom to conservative radio host Rush Limbaugh, who announced his cancer diagnosis Monday.

What it did not include was any mention of Wednesday’s scheduled Senate vote on whether to remove Trump from office on the articles of impeachment that were approved by the House less than two months ago in the same chamber where Trump spoke Tuesday.

Arizona Republicans said they left the address feeling empowered, while the state’s Democratic lawmakers used terms like “eerie” and “bizarre” to describe the version of America painted by Trump. Rep. Raul Grijalva, D-Tucson, called the speech little more than a “pathetic” campaign rally.

“Impeached President Trump only knows how to stir division,” Grijalva said in a tweet. “Meanwhile, the American people are struggling to figure out their future. We deserve better.”

He said Trump’s economy works for billionaires and corporations, but not for the millions of workers who “struggle to provide for their families and make ends meet.”

But Rep. Debbie Lesko, R-Peoria, said the night as a whole was “all very positive and good.”

“I believe him,” said Lesko, a staunch Trump supporter. “He wants America to be first, and I think that’s what he’s striving for.”

Rep. David Schweikert, R-Fountain Hills, hailed the low unemployment and “roaring economy” touted by the president in his speech.

“There was optimism,” Schweikert said. “It’s not Republican or Democratic optimism … It’s something we should actually be joyful about.”

The speech did deliver on the “relentless optimism” that had been promised by White House officials, with the president claiming that his administration has “shattered the mentality of American Decline.”

The 78-minute address was interrupted more than 100 times by applause, mostly by Republicans in the joint session of the House and Senate, and was filled with typical Trump superlatives.

“Jobs are booming, incomes are soaring, poverty is plummeting, crime is falling, confidence is surging and our country is thriving and highly respected again,” Trump said to applause. “America’s enemies are on the run, America’s fortunes are on the rise, and America’s future is blazing bright.”

That future, Trump said, includes eradication of the AIDS epidemic by the end of the decade and a return to the moon as a stepping stone to the first manned mission to Mars. Where there were dark clouds in the address, they were there mostly to highlight Trump’s achievements or spotlight his goals.

He recognized the widow and son of Army Staff Sgt. Christopher Hake, killed in 2008 in Iraq by a roadside bomb attack that Trump blamed on Iranian Gen. Qassem Soleimani, who was killed in a U.S. drone strike the president ordered in January. 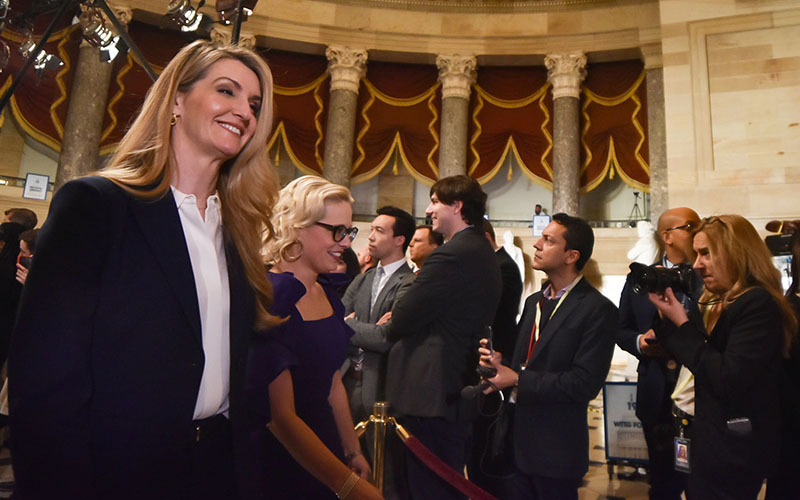 Sen. Kelly Loeffler, R-Georgia, left, walks with Sen. Kyrsten Sinema, D-Arizona, who said in a statement after the speech that there is “much more that binds Americans, and Arizonans, together than what pulls us apart.” (Photo by Christopher Scragg/Cronkite News)

The president’s guests included the brother of a California man killed by an undocumented immigrant who Trump said was on the streets because of that state’s sanctuary laws. Trump then called for passage of a Senate bill that would allow victims of crime to sue “very terrible” sanctuary cities in connection with the crime.

Trump renewed his calls for restrictions on late-term abortions, for tougher border security and tighter immigration laws – saying a “long, tall and very powerful wall is being built” at the southern border – and for a national school choice program that he said could reach 1 million students.

He also called on Congress to pass “bipartisan legislation that achieves the goal of dramatically lowering prescription drug prices.” That led Democrats to break out in chants of “HR3, HR3,” a reference to a Democrat-sponsored prescription drug bill passed by the House in December that has stalled in the Senate.

Trump’s call for vocational and technical education “in every single high school in America” was also applauded by Democrats.

Despite his calls for bipartisanship, Trump peppered his speech with references to the “radical left” in immigration issues and the threat of a “socialist takeover of our healthcare system.”

“We will never let socialism destroy American healthcare,” Trump said, after noting that 132 senators and House members have co-sponsored Medicare for All legislation.

Lesko praised the president for calling out Democrats on the issue: “It’s a government takeover of healthcare and that’s socialist,” she said of the Medicare for All bills.

But Grijalva said the “only person destroying American healthcare is Donald Trump.” He pointed to the administration’s efforts to weaken or reverse the Affordable Care Act – or Obamacare – that extended health care to millions of Americans.

Trump stuck to his script Tuesday, with none of the partisan jabs or gloating that some had feared on the eve of what is largely expected to be his acquittal by the Senate of impeachment charges. But there were other notes of partisanship during the night. After Trump appeared to rebuff House Speaker Nancy Pelosi’s offer of a handshake at the beginning of the speech, she dramatically tore up her copy of his speech after he was finished speaking Tuesday.

Lesko said she was “very disappointed” when Pelosi ripped up the speech.

“I thought it was really uncalled for, and really, really below her quite frankly,” she said.

But Rep. Tom O’Halleran, D-Sedona, said he was hoping Trump would discuss the need to find common ground in the nation. The speech lacked that, said O’Halleran, who thought Trump did not give Congress the recognition it deserved for some of the improvements he claimed for himself and his administration.

“I just think that looking into the future, we really have to address the priorities of our nation and work together to do that,” he said. “I’m more than willing to do that, but we have to find a way to not make this an area of conflict but an area of compromise, being able to come together.”