Marsha and Carl Mueller hold a photo of daughter Kayla, who was kidnapped and killed by the Islamic State while doing humanitarian work in the Middle East in 2015. The Muellers were recognized by the president at the State of the Union. (Photo by Andea Hanks/The White House) 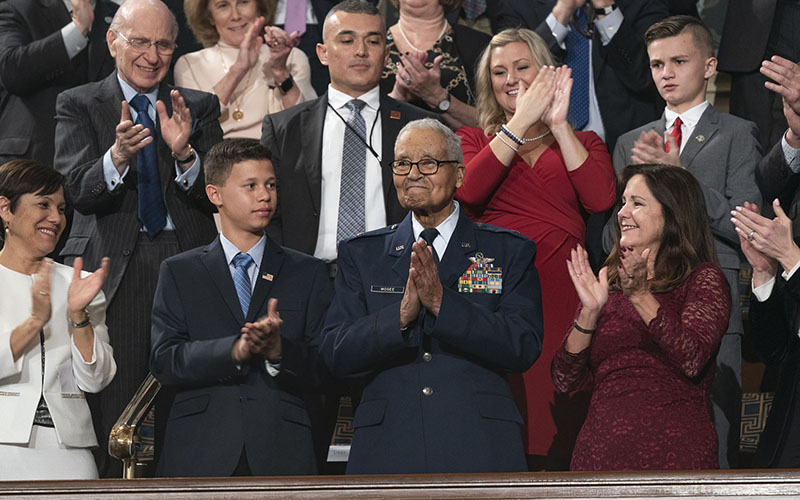 Scottscale eighth-grader Iain Lanphier, a young aviator, and his great-grandfather retired Brig Gen. Charles McGee, one of the last surviving Tuskegee Airmen, were guests of President Donald Trump at the 2020 State of the Union. (Photo by Shealah Craighead/The White House)

Prescott resident Kayla Mueller was 26 when she was killed in Syria by ISIS forces, whose leader was later targeted and killed by U.S. forces. Mueller’s parents were President Donald Trump’s guests at the State of the Union Tuesday. (Photo courtesy CNN)

WASHINGTON – An eighth-grader from Scottsdale and the parents of slain Prescott native Kayla Mueller were among President Donald Trump’s surprise guests for his State of the Union address Tuesday night.

Carl and Marsha Mueller, whose daughter Kayla was killed while doing humanitarian work in the Middle East in 2015, were seated in the first lady’s box and recognized by the president during the speech.

Also on hand was eighth-grader Iain Lanphier of Scottsdale who was introduced as the youngest recruit to the Defense Department’s new Space Force – and the great-grandson of Tuskegee Airman Charles McGee, a centenarian Trump promoted to brigadier general this month.

Arizona lawmakers said after the speech that they had no advance notice that the Arizonans wound up as guests of the president, but welcomed their inclusion, particularly the presence of the Muellers.

“What (the Mueller family) has suffered through, and the vision of that young boy going to space,” said Rep. Tom O’Halleran, D-Sedona. “It was just a tremendous event for that purpose.”

Kayla Mueller was doing humanitarian work in Turkey and had accompanied another aid worker on what was supposed to be a short trip to Syria in 2013 when she was abducted by the Islamic State, which was establishing its so-called caliphate across parts of Syria and Iraq.

The U.S. government reported that Mueller, a Northern Arizona University graduate, was killed 18 months later. She was 26 at the time.

It was last October when Trump announced that U.S Special Forces had killed IS leader Abu Bakr al-Baghdadi, who was accused of taking part in Mueller’s rape, torture and killing. That operation was dubbed Operation Kayla Mueller and carried out, Trump said Tuesday by “Task Force 8-14,” named for Mueller’s Aug. 14 birth date.

The Muellers brought a photo of Kayla that they held up when Trump spoke about her.

“Carl and Marsha, America’s warriors never forgot Kayla – and neither will we,” Trump said during a portion of the speech that highlighted U.S. military action against terror groups.

Iain was one of the first of nearly 20 guests identified by Trump Tuesday as he hailed the creation of a new branch of the military, the Space Force, last year.

Trump said Iain “has always dreamed of going to space.”

“He aspires to go to the Air Force Academy, and then he has his eye on the Space Force,” Trump said. “As Iain says, ‘Most people look up at space. I want to look down on the world.'”

But Trump said Iain’s “greatest hero” is his great-grandfather, Charles McGee, an Ohio native who is one of the last surviving members of the Tuskegee Airmen, the first black fighter pilots in the U.S. military. Trump said McGee flew more than 130 combat missions in World War II and served in both Korea and Vietnam.

McGee, who turned 100 last month, is retired and lives in the Maryland suburbs of Washington. The Defense Department budget that passed Congress last month included a provision promoting McGee to brigadier general.

“Earlier today, I pinned the stars on his shoulders in the Oval Office,” Trump said Tuesday night. “General McGee, our nation salutes you.”