Despite cold and rainy weather, hundreds lined up to rally outside the Supreme Court in support of the Deferred Action for Childhood Arrivals program the court was considering. (Photo by Lindsay Walker/Cronkite News) 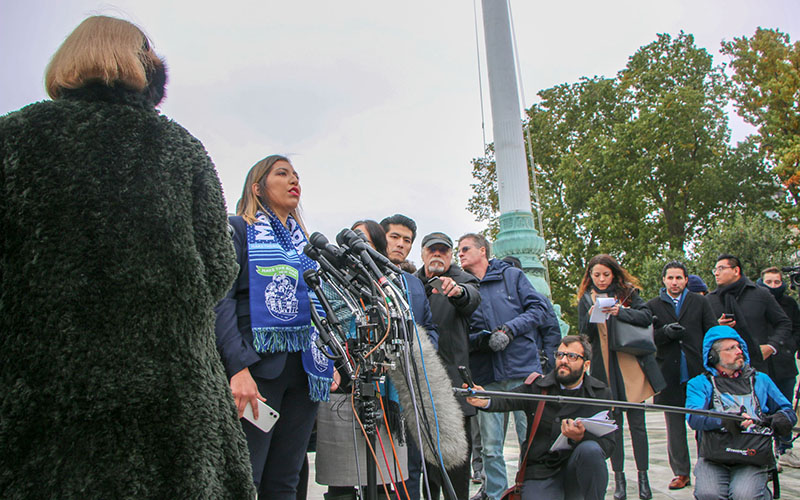 One of the plaintiffs addresses a cheering crowd outside the Supreme Court after it heard arguments over whether the Trump administration can overturn DACA. (Photo by Lindsay Walker/Cronkite News) 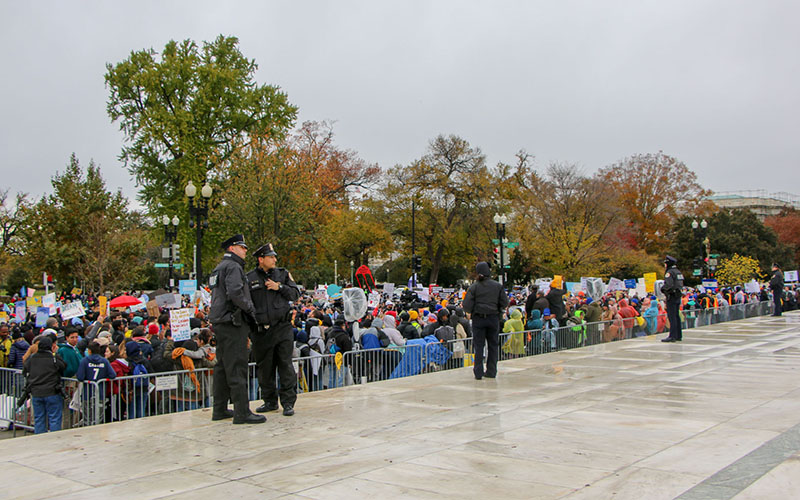 A respectful, but boisterous, crowd of DACA supporters chanted and cheered outside the Supreme Court in support of the deferred deportation program. (Photo by Lindsay Walker/Cronkite News)

WASHINGTON – The Supreme Court grappled Tuesday with the push to end the DACA program, with some justices suggesting that the Trump administration’s justification for the move was flimsy and did not take into account its full impact.

But other justices seemed to agree with Solicitor General Noel Francisco that the administration had provided more than enough reasons for its decision, and that doing away with DACA was just an attempt to enforce the law as written.

“Regardless of whether these concerns about the DACA policy rendered it illegal or legally questionable, there are sound reasons of enforcement policy to rescind the DACA policy,” Justice Brett Kavanaugh said during the hearing.

But Justice Sonia Sotomayor argued that there was not enough consideration or notice given before the decision to end the deferred deportation program, a move she said has the potential “to destroy lives.”

Their comments came during an extended 80-minute argument session over the Deferred Action for Childhood Arrivals program, created in 2012 under former President Barack Obama to provide temporary relief from deportation for immigrants brought to this country illegally as children.

Young immigrants who met certain eligibility requirements – including having a clean criminal record and being in school or the military, among others – could get two years of protection from deportation, and could apply for work permits and drivers’ licenses.

Critics have long decried the program, enacted by executive order, as a presidential overreach and it was a target of President Donald Trump’s during his campaign. On Sept. 5, 2017, then-Attorney General Jeff Sessions announced that the program would be ended in six months.

That move was challenged in courts, which ordered the Department of Homeland Security to continue accepting DACA renewal applications. The program, for which as many as 800,000 people had been approved at one time or another, still protected more than 660,000 immigrants as of this summer, according to data from U.S. Citizenship and Immigration Services.

Lower courts had ruled that the administration had not shown that the original DACA program was illegal, one of Sessions’ main arguments for ending it. The Supreme Court combined three of those cases – brought by the National Association for the Advancement of Colored People, the University of California regents, and a group of DACA recipients – into one hearing Tuesday.

Several justices asked if the government considered the impact that ending DACA would have on those recipients, on their communities and on businesses when it announced in 2017 that it planned to end the program.

“I think my colleagues have rightly pointed out that there’s a whole lot of reliance interests that weren’t looked at, including the current president telling DACA-eligible people that they were safe under him and that he would find a way to keep them here,” said Justice Sonia Sotomayor said of Trump.

“And so he hasn’t and, instead, he’s done this. And that, I think, has something to be considered before you rescind a policy,” Sotomayor said.

Theodore B. Olson, a lawyer representing DACA recipients, said the administration’s decision warranted review precisely because of its potential impact.

“The administration, when it does that kind of a decision with respect to the lives of hundreds of thousands of people, which has engendered reliance, which reverses not only a position of two administrations, but the Office of Legal Counsel, changes policy, then all we’re saying is that there’s a presumption of reviewability of that decision,” Olson said.

California Solicitor General Michael J. Mongan doubled down on that notion, arguing that the Trump administration has not fully acknowledged the impact that ending DACA would have.

“It’s not a detailed discussion of the dramatic harm to hundreds of thousands of young people, to their families, to their employers, to the states, to the economy that would arise from this decision,” Mongan said of a Department of Homeland Security memo issued last year on the rationale behind ending the policy.

But Francisco said the Trump administration had given reasons that were “more than sufficient to justify the rescission, both our serious doubts about its legality, as well as our general opposition to broad-based non-enforcement policies.”

DACA “was always meant to be a temporary stop-gap measure,” not something to protect vulnerable people forever.

“I think that the prior president didn’t, couldn’t, and hasn’t made any kind of promise that DACA would remain in effect in perpetuity because it would have been impossible to make that promise,” Francisco said.

He rejected supporters arguments that the policy was merely one of “prosecutorial discretion,” in which attorneys prioritize which cases to pursue. In other words, Francisco said, rescinding the program only meant returning to enforcing federal immigration law as Congress intended.

“Here, we are enforcing the law,” Francisco said. “And it’s very difficult to see why Congress would ever pass a law, say that something is illegal, and then try to hamstring the government’s ability to enforce it.”

“I think and would hope that if they actually did a real analysis of DACA, they would recognize that this is a valid exercise of the executives’ authority,” said Napolitano, who was Homeland Security secretary when the policy was unveiled.

The court is not expected to issue a ruling until sometime next year, but DACA supporters remain hopeful after the hearing.

“The justices asked tough questions on both sides, and that happens on most of the cases that come through here,” said Rep. Joaquin Castro, D-Texas, chairman of the Congressional Hispanic Caucus.

“I’m hopeful that, in the end, the court will allow DACA to stand,” he said. “These people’s lives are on the line – a lot of them have never known any other country as their home, and the idea that they may have to leave is shocking to a lot of Americans.”