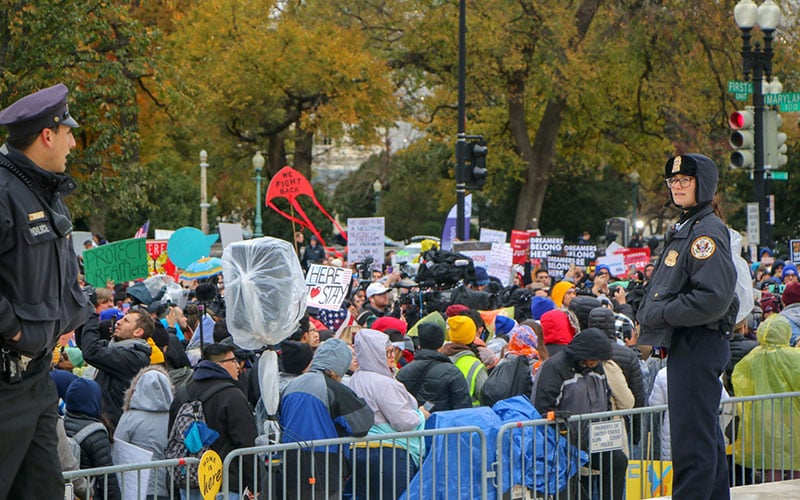 Hundreds rallied outside the Supreme Court as it heard arguments in whether it should uphold lower courts that have blocked efforts to do away with DACA. (Photo by Lindsay Walker/Cronkite News) 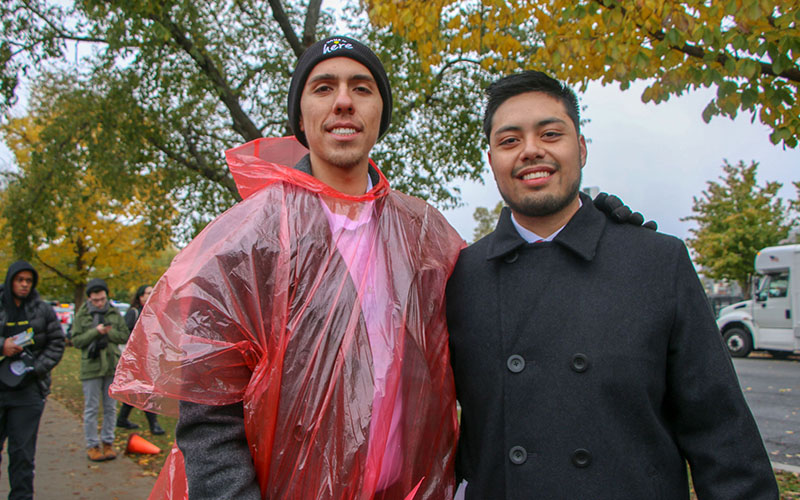 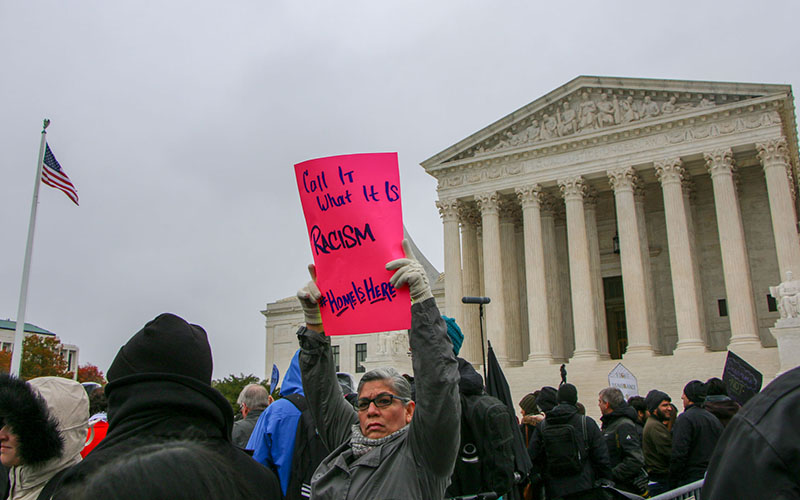 The hundreds who rallied at the Supreme Court were all DACA supporters. While no counter-protesters were on hand, President Donald Trump tweeted out his opposition to DACA before the hearing. (Photo by Lindsay Walker/Cronkite News)

WASHINGTON – Hundreds of protesters crowded the street outside the Supreme Court Tuesday, chanting “si, se puede” and “home is here” as justices inside the court weighed the future of DACA, the Deferred Action for Childhood Arrivals program.

DACA recipients traveled from across the country, including several from Arizona, to voice their support for the Obama-era policy that defers deportation for young immigrants who were brought here illegally as children. Trump administration plans to end the program have been halted by lower courts.

Eddie Chavez Calderon, a DACA recipient from Phoenix, said it was important for him to show up at the court and put a face on the issue.

Chavez Calderon was watching as other DACA recipients took turns telling their personal stories as a well-behaved but boisterous crowd chanted and waved signs, many shaped like map pointers with the words “home is here” on them.

No counter-protesters were present, but the most prominent critic of the program made his opposition known on Twitter early Tuesday.

“Many of the people in DACA, no longer very young, are far from ‘angels.’ Some are very tough, hardened criminals,” President Donald Trump tweeted ahead of the hearing.

But Trump then added that “a deal will be made with Dems for them to stay!” if the Supreme Court overturns lower courts and says the administration does have the authority to end DACA.

DACA was established by President Barack Obama by executive order in 2012. It allows immigrants brought to the U.S. before the age of 16 to be protected from deportation for two years, in addition to giving them the ability to get work permits and drivers licenses, among other benefits. To qualify, recipients have to be working, in school or in the military and have clean criminal background.

Critics have long argued that DACA is a prime example of executive overreach and Trump had vowed to do away with it. His attorney general at the time, Jeff Sessions, announced on Sept. 5, 2017, that DACA would be phased out over six months.

But that move was quickly blocked by courts, which allowed current DACA recipients to apply for renewal of their protection while the case worked its way through the courts. That led to Tuesday’s hearing, where the court was asked to consider whether the administration had followed proper procedures when it moved to end the program.

Many supporters outside the court were hopeful that DACA’s constitutionality will be upheld when the justices hand down their decision, which is not likely to come until next year.

Arizona State University student Carlos Yanez said DACA recipients must contend with school, work and continuous policy changes to the program, leading to extreme stress and anxiety. It was important for him to be outside the Supreme Court on the day of the hearing because “there’s a story behind every statistic.”

“It feels like planning your life two years at a time because you can’t really think ahead,” he said. “You don’t know what’s going to happen in the future.”

That hit home for Chavez Calderon, who recently lost his grandmother but was forced to watch her funeral on screen, because if he went to attend the services in Mexico he would not be allowed to return to the U.S.

He stopped by the court Tuesday while in Washington with Arizona Jews for Justice to lobby for restoration of advanced parole, a program that let immigrants leave the country for a short period of time and return.

“Right now, we have a golden cage of freedom where we can’t leave but we can’t really stay,” he said.

Many of those at the rally took offense at Trump’s tweet about some DACA recipients being hardened criminals.

“I’m a fifth-grade teacher, I guess a criminal is teaching your children,” said Oscar Hernandez, who lives and works in Avondale. He is working on a master’s degree from Arizona State University through Teach for America.

“If you want to push whatever agenda you want, at least make sure it’s an accurate one,” said Hernandez.

“We’re here not just because this is a status fight,” he said. “This is a liberation movement.”