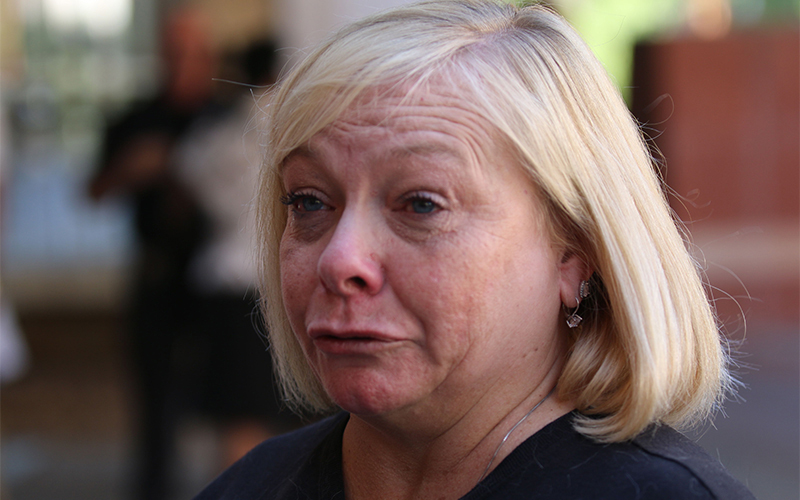 Andrea Max told the council, through tears, that she had received calls as a Phoenix police dispatcher threatening to kill her family. (Photo by Elly Lundberg/Cronkite News) 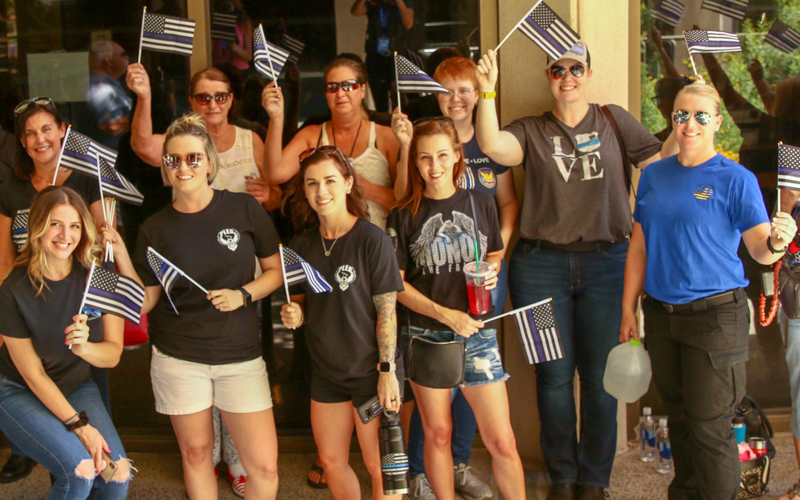 Rally for Law Enforcement organized Wednesday’s show of support after a week in which protesters criticized police behavior during a May 27 stop of a young couple whose daughter was accused of stealing a doll. (Photo by Elly Lundberg/Cronkite News) 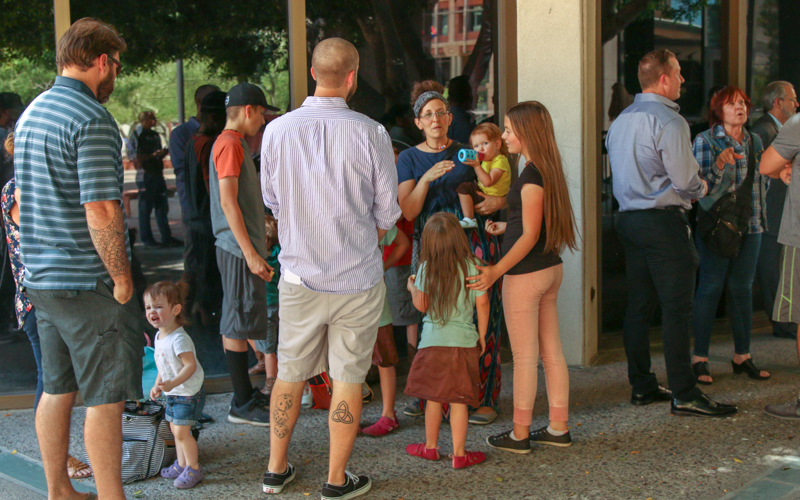 Families and ex-officers came to Wednesday’s rally to support Phoenix police. The group hoped to comment publicly after an afternoon meeting of the Phoenix City Council. (Photo by Elly Lundberg/Cronkite News) 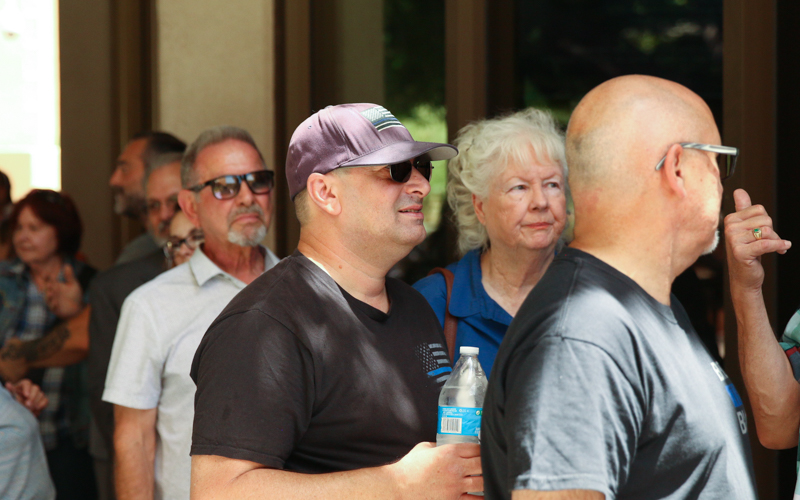 “It’s our turn,” said Nohl Rosen (center), the organizer of Rally for Law Enforcement. “There is a war on police in this country. … We need to support our police.” (Photo by Elly Lundberg/Cronkite News) 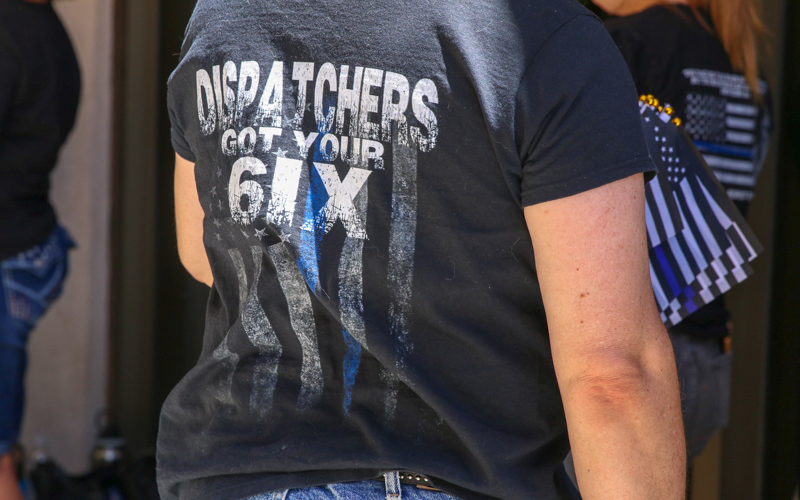 PHOENIX – Demonstrators rallied Wednesday outside City Hall and later addressed the City Council to show support for police in the wake of recent outrage over a viral video of a controversial police stop for suspected shoplifting.

“It’s our turn,” organizer Nohl Rosen said Wednesday. “There is a war on police in this country. We need to support our police.” 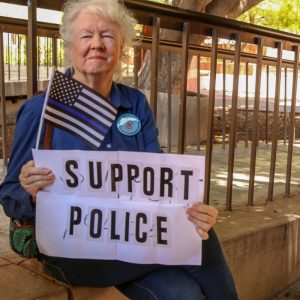 Kathryn Kobor of the countermovement Blue Lives Matter has been involved with many police support groups over the years and has had many friends who were sworn officers. (Photo by Elly Lundberg/Cronkite News)

Rally for Law Enforcement organized the event after protesters critical of police practices descended on a City Council meeting last Wednesday to oppose the approval of a city budget until measures were in place to curb police overreach. The council approved the budget after members said they would explore systems to improve police accountability.

Mayor Kate Gallego, who had apologized for the police behavior shown in the video, has called for a special council meeting July 2 to discuss creation of a civilian review board, according to azcentral.

A May 27 Phoenix police encounter with Dravon Ames, Iesha Harper and their two young daughters was captured in a video that went viral earlier this month. The video shows officers, guns drawn, confronting the couple after their 4-year-old allegedly took a doll from a dollar store, in what many called an excessive display of force.

The mood at Wednesday’s council meeting was in contrast to last week’s public drubbing of police. Councilman Sal DiCiccio, who was booed at the June 19 meeting, was applauded Wednesday as he spoke against calls for the firing of the two officers shown in the viral video.

“Never sacrifice anybody who has done the right thing,” he said as the council considered a move to resupply police with more non-lethal weapons.

When the vote came up, Andrea Max told the council, through tears, that she had received calls as a Phoenix police dispatcher threatening to kill her family.

After comments from the public, council members voted 8-2 to approve the non-lethal weapons. The group’s Facebook event page called on “the pro-police side to speak out in support of the officers who made that stop and did their jobs.”

About 50 people turned out; several cheered as two police officers walked past the group.

Natalie Reilly of Nothing But Love Notes, an organization that handwrites notes of support for members of the military and first responders, said her best friend and son are law-enforcement officers, and she wanted to let police know the community supports them.

She was concerned by the events at last week’s City Council meeting.

“If we speak over each other, we’ll never get anywhere,” Reilly said.

Black and blue American flags with a prominent blue line across the center were being handed out to supporters. The “thin blue line” flags symbolize that police lives matter, organizers said. There were two variations: the American one being handled out and simple black one with a blue line down the middle. The black coloring represents chaos, the blue represents order.

The “police lives matter” response emerged as a counterpoint to the national Black Lives Matter movement, which arose to protest a spate of police killings of black people across the country, including Eric Garner in New York City and Michael Brown in Ferguson, Missouri. Both deaths occurred in the summer of 2014.

Some in the crowd of about 50 cheered as two police officers walked past them.

The May 27 Phoenix police encounter with Dravon Ames, Iesha Harper and their two young daughters was captured in a video that went viral earlier this month. The video shows officers, guns drawn, confronting the couple after their 4-year-old allegedly took a doll from a dollar store, in what many called an excessive display of force.

The video drew national attention and prompted an apology from Mayor Kate Gallego on Twitter in which she described the actions of the officers involved as “completely inappropriate and clearly unprofessional.”

Police Chief Jeri Williams also apologized on Facebook and promised an investigation. But at the council’s budget session last week and a community forum attended by thousands, many speakers chastised the mayor and chief. Most of the people who spoke said the video was one example of frayed relations between police and residents.

Rosen said the supporters who turned up Wednesday represent a silent majority.

There was a time when “everybody respected the police … even criminals,” he said, but that has changed in recent years.

“We shouldn’t give criminals $10 million payoffs,” he said of Ames and Harper’s plan to file a $10 million claim against the city, the precursor to a lawsuit.

Rosen started Rally for Law Enforcement in 2014 after he grew “tired of seeing law enforcement get attacked on a daily basis, not just by anti-police protests but by the (news) media as well,” according to its website.