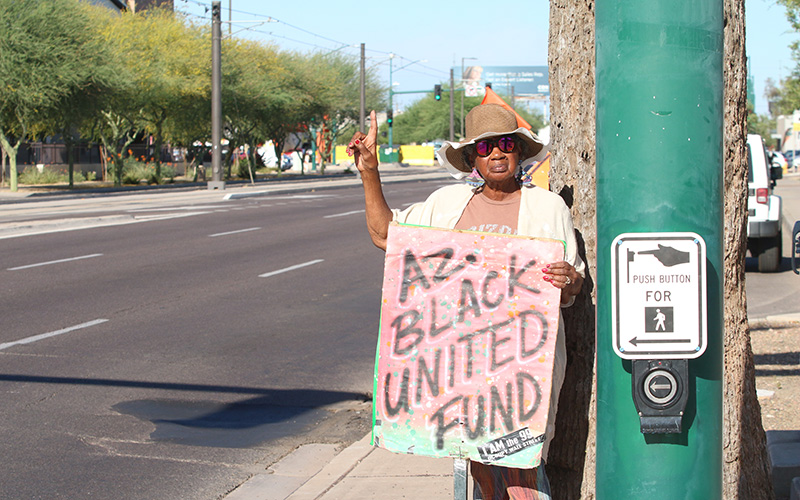 Carolyn Lowery, the director of AZ Black United Fund, stands outside a community meeting intended to ease tensions between the Police Department and Phoenix residents. (Photo by Tyler Dunn/Cronkite News) 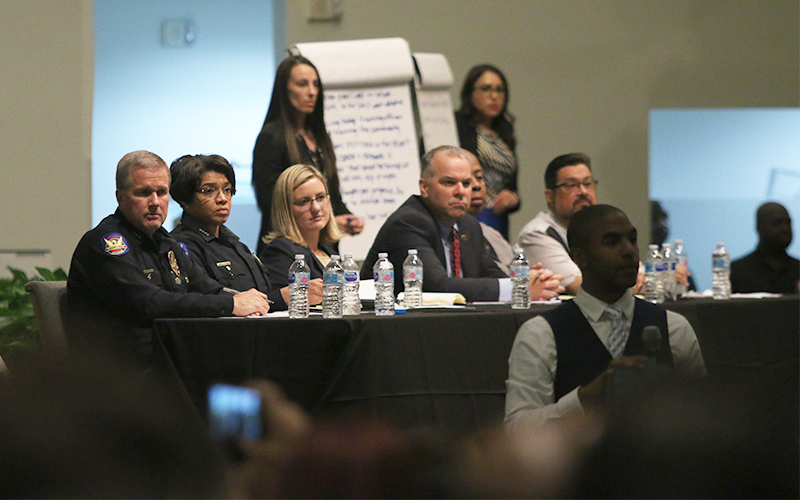 PHOENIX – A community meeting intended to quell the bubbling anger over a viral video involving two Phoenix police officers grew contentious Tuesday night but ended with a promise: “We can do better.”

Mayor Kate Gallego concluded the nearly three-hour meeting with a short statement, telling the hundreds who remained at Pilgrim Rest Baptist Church that Phoenix officials would return in 30 days with Police Department recommendations and continue community forums on police behavior.

The start of the 6 p.m. meeting was delayed by almost half an hour as people struggled to find seats in the 2,600-seat church. Protesters dotted the parking lot holding signs like “Stop Pointing Guns at Us!” and “Stop Police Brutality” as a line formed around the building.

“I’m a citizen of Phoenix, I’m angry, I’m scared, I’m worried, I’m a father,” said Eric Bailey, who moderated the meeting. “I know that a vast majority of (police officers) are wonderful humans. We’re not here to talk about the vast majority.”

The viral video that prompted the outrage appeared to show the officers aggressively confront a couple and their two daughters, ages 1 and 4, at gunpoint late last month after the 4-year-old allegedly took a doll from a local dollar store. At one point in the video, an officer can be heard saying, “I’m gonna put a f—— cap in your f—— head!”

Gallego and Williams have issued statements condemning the actions of the officers, who have not been identified and are said to be working desk duty pending completion of an internal investigation.

Dravon Ames and Iesha Harper, the couple in the video, were among the first to speak at the meeting and were resolute in their demand the officers to be fired.

“We are lucky to be alive,” Ames said. “I want to thank God for shielding my family that day.”

Dozens of other Phoenix residents followed for more than two hours, many of whom accused the Police Department of specific instances of violence and harassment.

Others, including Savannah Taylor, 12, related the experience to their own lives.

“I’m shaking right now,” she said, “because I can’t imagine that happening to me or my brother.”

A young girl in the audience shares her thoughts on the case and says she wants officers to be taken care of. pic.twitter.com/1WzWv9Pnct

Some of the tensest moments came after comments made by Williams, who led with an apology to Ames, Harper and their children for “less-than-professional service” – phrasing that prompted one resident to chide the police chief.

Later in the meeting, some believed Williams deflected blame from police when she said “real change doesn’t start with our Police Department, real change starts with our community.” Boos immediately rang out; Williams later said that in her mind, “community” includes the police.

“I know we can do better,” Williams said.

Bailey echoed that notion of partnership throughout his moderating and reassured residents that every comment would be transcribed and be made publicly available through the city’s website.