Parris Wallace of Poder in Action exhorts the crowd to oppose the proposed police budget before changes come to the department. (Photo by Grayson Schmidt/Cronkite News) 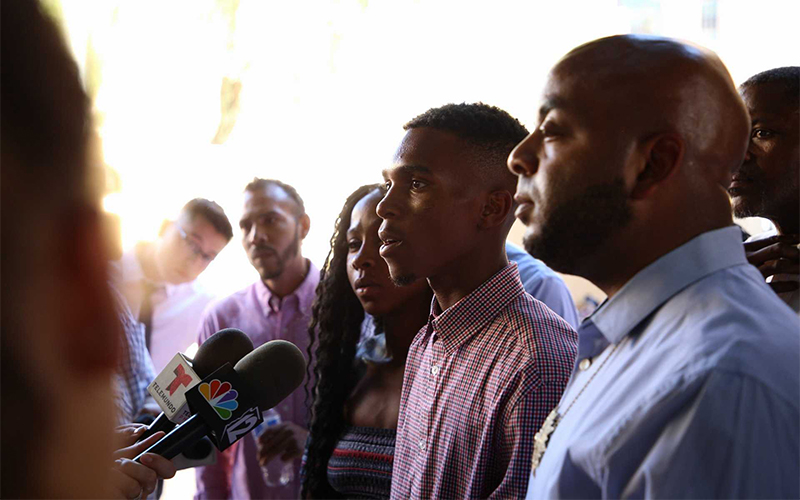 Dravon Ames (center) says firing the two police officers involved in the May 27 incident would get some “bad apples off the street.” (Photo by Tanner Puckett/Cronkite News) 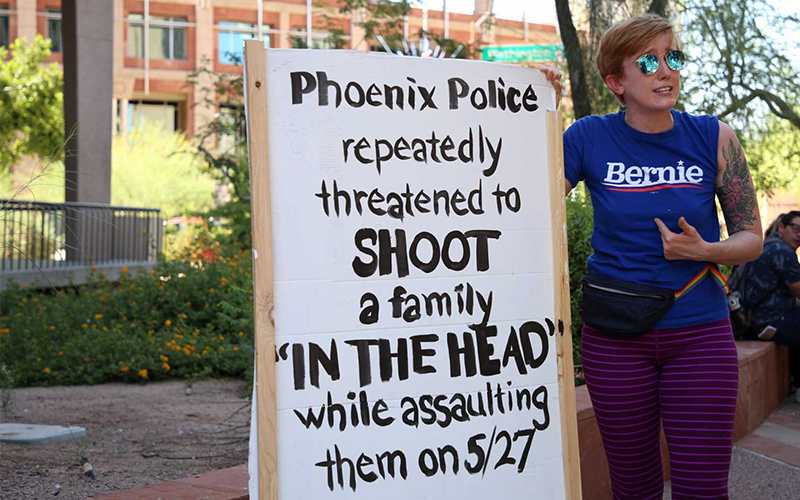 Caitlin Clifford, 31, of Phoenix, demonstrates outside City Hall. She has taken part in protests of child detention and serves as a driver for migrant families. (Photo by Tanner Puckett/Cronkite News) 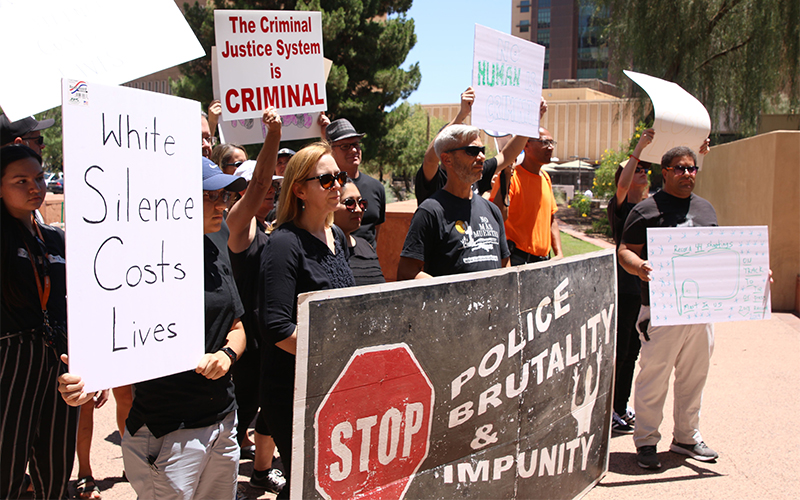 PHOENIX – One by one, members of the community stepped up to the microphone at the City Council meeting, some trembling and angry.

They gave voice to their experiences, talking of police encounters that didn’t end well.

They asked for accountability, such as increased use of body cameras, better training, vetting of recruits and an improved reporting system for bad behavior. They called again for the firing of the two officers involved in an aggressive encounter last month with a couple and their young children over a shoplifting accusation, shown in a video that went viral.

The family of Dravon Ames and his fiance, Iesha Harper, were among dozens who spoke; others were middle-school students, representatives of activist groups and city organizations and residents who revealed personal pain.

“You can’t pass this budget,” said Viri Hernandez, director of Poder in Action. “You have to vote no … until the cops are fired.”

Her words kicked off a three-hour session of public ire and angst over community-police relations that included a verbal tussle with a council member who said speakers were unfairly maligning the police.

After everyone who wanted to speak to the council did so, the council voted 7-2 to approve a city budget that includes about $721 million for the police department. Several council members also called for police accountability and suggested systems to deliver it, but that was not part of the vote.

Mayor Kate Gallego, who had pledged to allow everyone a turn at the microphone, said the city will continue listening to the community and action will be taken. 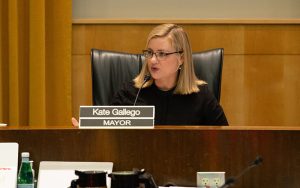 Kate Gallego faces her first major challenge as Phoenix mayor at a tense City Hall meeting on a budget increase for the Police Department. (Photo by Dylan Simard/Cronkite News)

Police have a “tough job,” Waring said. “You couldn’t pay me to do it.”

Waring and Councilman Sal DiCiccio, who expressed the most disagreement with the crowd, voted against the budget.

Rallies had been organized in downtown Phoenix in the hours before the City Council discussed the budget. They followed a community meeting Tuesday night in which Ames and Harper and members of the public took police to task for alleged incidents of violence and harassment.

The video shows the stop of Ames, 22, and Harper, 24, his pregnant fiancee, along with their two daughters on May 27 after their 4-year-old daughter allegedly took a doll from a dollar store. In the video, one officer can be seen pointing a gun at Ames and shouting “I’m going to put a cap in your a–.”

Marze Herdiman told the City Council the incident reminded her of what happened when her 34-year-old son was killed by a police car that hit his bicycle. The police painted her son as a perpetrator when he was a victim, she said.

Drawing parallels to the discrepancies between the police report of the Ames incident and the viral video, Herdiman said her son’s “crime scene was done horribly.”

Less than an hour into the meeting, DiCiccio became irate with the “name-calling,” as he called it, and was met with boos as he defended police.

Other speakers sought solutions, and body cams were a favorite theme. Several others sought to change the disciplinary rules and incentives in the Police Department to make it easier to punish police who behave poorly.

Public sector workers look on as community members recount personal encounters with Phoenix police and call for reform within the department. (Photo by Dylan Simard/Cronkite News)

Councilman Carlos Garcia, a newcomer to the council, wore a T-shirt that read “End Police Brutality” to the meeting and was the first on the council to suggest setting up processes to address grievances.

When it came time to vote on the budget, Garcia asked about the feasibility of setting up an ad hoc committee to implement change in the police force and a community review board with subpoena power. He also wanted to know whether the council could expedite the firing of the officers.

After guidance from City Manager Ed Zuercher and Williams and a discussion with Councilwoman Laura Pastor, Garcia was satisfied that a committee could be formed to address changing police policy. He also found support, and legal approval, for forming a citizen review board.

Zuercher, however, did warn against violating the due process rights of the officers. He said the risk of firing the officers without a full review could lead to them getting rehired and also open up the possibility they would win lawsuits against the city.

Here are some of the scenes from the rally and the council meeting:

A 12-year-old boy said he was worried his black friends would be shot by police when coming to visit him.

An 11-year-old expressed concern for his own safety, saying that, as a trans black boy, he didn’t want to continually fear the police.

“It confuses me that an 11-year-old is telling you this when it is so obvious,” he said.

Several speakers brought up the date, June 19, or Juneteenth, and its historical connection to race, slavery and delayed freedom in the nation.

Juneteenth is the anniversary of the announcement in 1865 that slaves were finally free in Texas, 2½ years after the Emancipation Proclamation had declared slavery was over. The date is commemorated every year in several states, including Arizona. A Juneteenth festival was held Saturday at Eastlake Park Community Center in Phoenix.

After speaking to the council, Dravon Ames spoke with reporters outside the room regarding what the firing of the officers would mean. 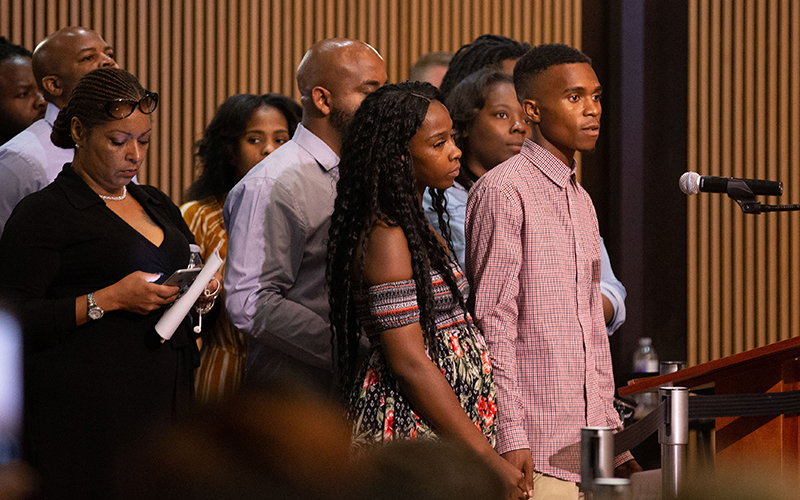 Dravon Ames (right) and his fiancee, Iesha Harper, are at the center of the conversation regarding police brutality after a viral video of a May 27 incident showed Phoenix officers physically assaulting them. (Photo by Dylan Simard/Cronkite News)

“That’s going to get some of those bad apples off the street – those who would kill a one-year-old, a four-year-old, a young father, a pregnant mother,” he said later outside City Hall. “We want justice. We want those officers fired.”

He said he appreciated the supporters who came out.

“Thank you. Stay strong, and we’re going to get justice.”

Several speakers asked that the council delay a decision on the police budget until officers involved are fired and reforms are in place to hold police accountable.

Xenia Orona questioned why body camera footage and police reports could not be made immediately available after police encounters.

“It should be as easy as checking a Twitter feed,” she said.

The Arizona Republic says Phoenix is the largest city in the nation without body cameras for officers. The council this year decided to fund such cameras for patrol officers but they aren’t available yet.

After a string of community members condemned the police and opposed funding for the department, Councilman Sal DiCiccio had enough.

“I want the media to know that not everyone in the city agrees with this crap,” he said as catcalls and shouts rose in the council chambers. 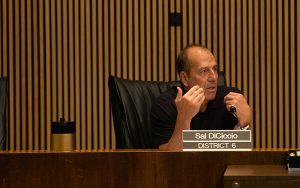 Protesters were especially hostile to City Councilman Sal DiCiccio for his pro-police stance, despite his no vote on the proposed budget. (Photo by Dylan Simard/Cronkite News)

DiCiccio said the references to police as rapists and murderers insulted the families of the officers.

“The city does not believe this stuff,” he said. “You’re anarchists out to destroy these individuals, you’re out to destroy our city and I’m going to point it out repeatedly.”

DiCiccio dismissed a shout of “racist” from the audience as just “another name call.”

The crowd ignored calls from the dais to “be respectful” but quieted a few minutes later after the next speaker called for calm and respect for differing opinions from both sides.

The Ames family arrived 15 minutes into the meeting. Three volunteers gave up their seats to accommodate them. 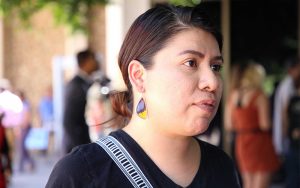 As the first to address the council, Viri Hernández, 28, director of the activist group Poder in Action, led a call-and-response to oppose a proposed police budget.

When she asked the crowd whether to go for the budget, some shouted “No!”

“They’re trying to vote on a $721 million budget for the police department,” the Maryvale resident said before the meeting. “This is our tax money that, after everything that has happened, they’re saying they’re still going to give to this department that is abusing, brutalizing, that is assaulting our community.”

Poder in Action demands the council vote against the budget, and it urges council members to “have the courage to demand that these officers be fired,” Hernández said. 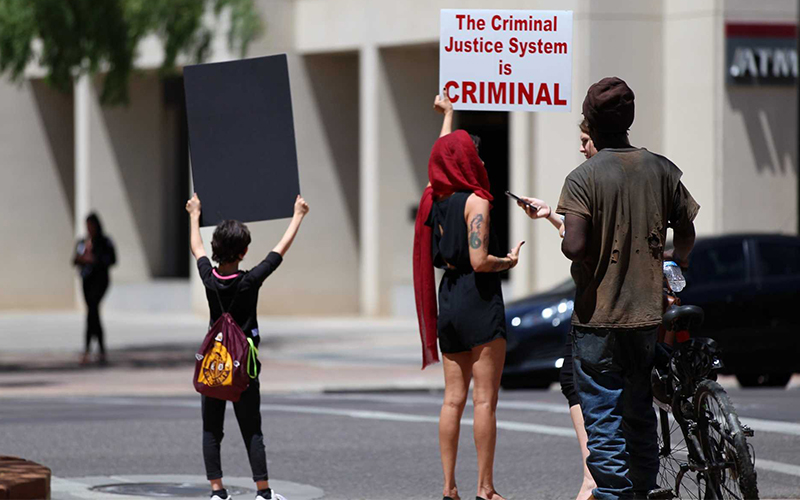 Leslie Pico, 32, and her daughter Elisa, 9, of Phoenix, hold signs outside City Hall. Leslie says that, as a “white-passing first-generation Latina,” it’s important to volunteer and raise the platform of such organizations as Poder in Action and Black Lives Matter. (Photo by Tanner Puckett/Cronkite News)

Leslie Pico, 32, brought her 9-year-old daughter Elisa to the rally because she believes it’s important for the girl to engage with “real life” issues.

“I don’t underestimate my children by any means,” Pico said. “They understood that this was wrong. They don’t need an investigation, they don’t need 30 days.”

Pico was not affiliated with any of the activist groups but said it is important for people to show up and show support for organizations rallying against police violence.

“This sign is 4-years-old and it still hasn’t gotten the job done,” she said, gesturing to a sign reading “Stop police brutality & impunity.”

Hours before council meeting, Roy Tatem, president of the East Valley NAACP, said in an interview that Phoenix police are suffering from a culture of racism, brutality and lack of accountability, which he called a “recipe for disaster.”

“There were many stories told last night,” Tatem said of the community meeting at Pilgrim Rest Baptist Church. “Personal stories of people victimized by the Phoenix police.”

He wants Phoenix police to implement body cameras as soon as possible.

“From little kids, we’ve been programmed to trust police officers, public servants as public service,” Tatem said. “Unfortunately, many police officers have not lived up to the standard, especially as we talk about policing a black and brown people, and poor people.” 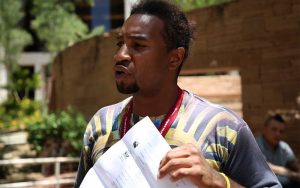 Peoria resident Torrence King, 37, says too many people – police and those they pursue – who have lost their lives. (Photo by Tanner Puckett/Cronkite News)

Outside City Hall, Torrence King, 37, of Peoria, said the community and police need to model their behavior after the array of colors in a crayon box.

Earlier Wednesday, Richard Crews, director of the Radicle Solutions Group, a consultancy group that works with organizations to address issues of institutional racism and oppression, proposed a technological solution to what he called a “systemic problem” of police violence.

The only way to address the issue of police violence, he said, is to create “an effective mechanism that exists for communities to be able to air what those grievances are.”

Smartphone apps could allow members of the community to more easily report any officer who has “conducted themselves in any manner that is unbecoming,” he said.