PHOENIX – Luis Marrufo, his brown eyes bright but focused, hunched over a client lying on a cushioned table. He pressed the sharp end of the tattoo machine into his client’s forearm, the needle dispensing carbon-colored liquid into his skin in vibrating bursts so quick they’re almost invisible to the naked eye.

The low-pitched buzz of the tattoo machine droned over the alt-rock playing softly in the closet-size room in an Ahwatukee Foothills office building on a floor housing mostly counseling offices. 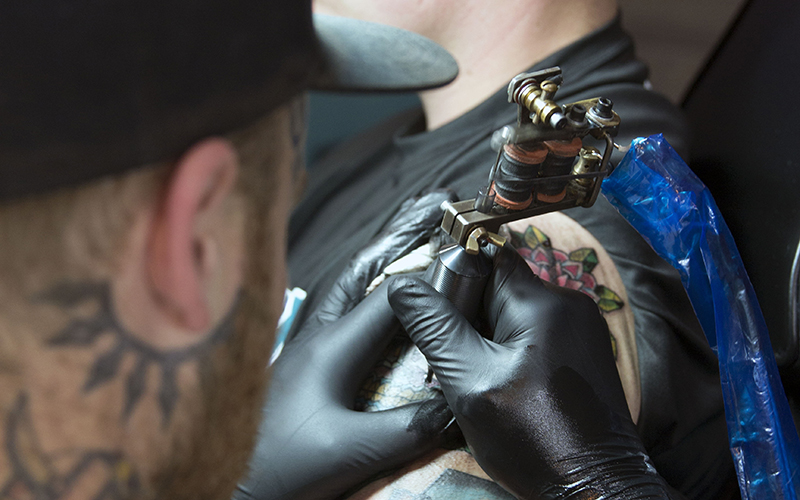 The room, decorated almost exclusively in black-and-white, save for a bamboo plant and decorative lamps on the desk, smelled clean, lacking the harsh chemical smell that usually accompanies sterilized equipment.

Marrufo was dressed head-to-toe in black – even many of the tattoos coating his forearms are exclusively in black ink. His jet-black hair was slicked back in a small top-knot.

For many, tattooing and ethics don’t often intersect. Clients have come to expect services that include good inks, sanitary conditions, fair pricing and talented, trustworthy artists, but a growing community of customers have an additional request for tattoo shops: vegan inks.

Some Arizona tattoo artists advertise themselves as “vegan,” providing the opportunity for a cruelty-free tattoo experience – outside of repeatedly poking their clients with needles, of course. Others simply choose vegan inks for their superior quality.

Marrufo, who has been vegan for seven years and goes by the handle @thevegantattooartist on Instagram, said it was his wife who got him thinking about vegan tattooing after asking whether the inks he used contained animal products.

Marrufo, a tattoo artist for 3½ years, said many new companies sell vegan ink, and that most tattoo artists using traditional inks are those sticking to older formulas. 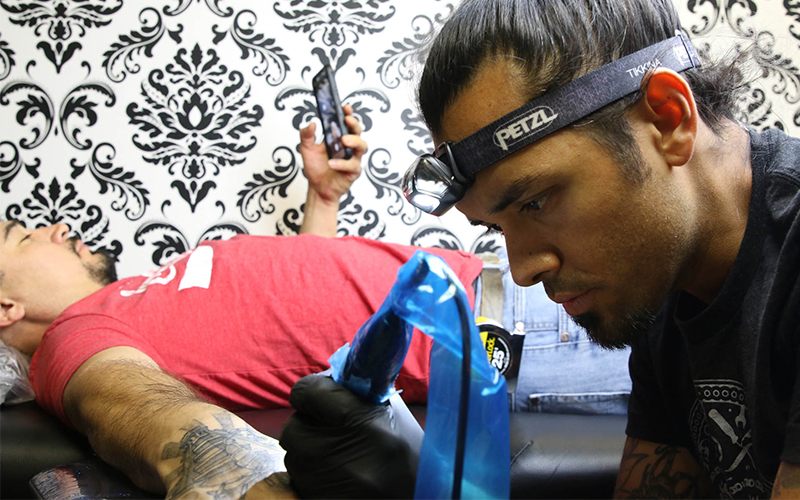 According to UrbanVegan, the animal products most commonly found in tattoo ink are glycerin, bone char and gelatin.

Gelatin, a type of collagen derived from animal tissue and bones, acts as a binding element. Glycerin, made from either animal fat or vegetable oil, thickens the ink and, Marrufo said, keeps it from separating.

Bone char, created by burning and crushing animal bone, is used to darken black inks. Marrufo, who works exclusively in black-and-white, chooses inks that use carbon instead.

Marrufo said he avoids color inks because they can be made with harmful chemicals or heavy metals, such as mercury.

Marrufo said he and his clients have felt the difference using vegan supplies can make.

“I noticed that just using all these cleaner products, the tattoo doesn’t get inflamed,” he said. “I hardly ever see blood, honestly. The tattoos don’t ever get too puffy. It’s just a cleaner process, you know? And I think your body recognizes that.”

Andrew Saspe, a friend and client of Marrufo who was visiting the shop to get his flower of life forearm tattoo touched up, shared a similar experience.

However, vegan inks come with some of the same health risks as non-vegan inks. Last month, the Food and Drug Administration announced that two U.S. vegan tattoo ink companies recalled one product each, after finding they were contaminated with bacteria or other potentially dangerous microorganisms.

Marrufo said he uses all-vegan products in his work, from the ink to the stencil paper to the razors he shaves clients with before tattooing them. He recommends coconut oil as an aftercare salve and uses environmentally friendly vegan soaps instead of Vaseline when preparing clients’ skin for the tattoo.

Saspe said he’s still adjusting his habits to be as vegan as possible. For him, choosing an artist that uses sustainable inks can be as important as choosing the tattoo itself.

“The first (tattoo) that I got, it had its own little meaning, but I didn’t think about what it was as far as the ink itself,” he said. “The idea that there’d be an animal product in it, something that came from a violent background was going on my body permanently, just didn’t settle right.”

Amelia Whitney, a Tempe tattoo artist, said she chose the inks she uses not because they’re vegan but because, to her, the brand, Eternal Ink, is top-quality.

Although Whitney, who was vegan for three years but changed her diet for health reasons, didn’t choose her inks for ethical reasons, she believes using vegan ink should be a no-brainer for tattoo artists.