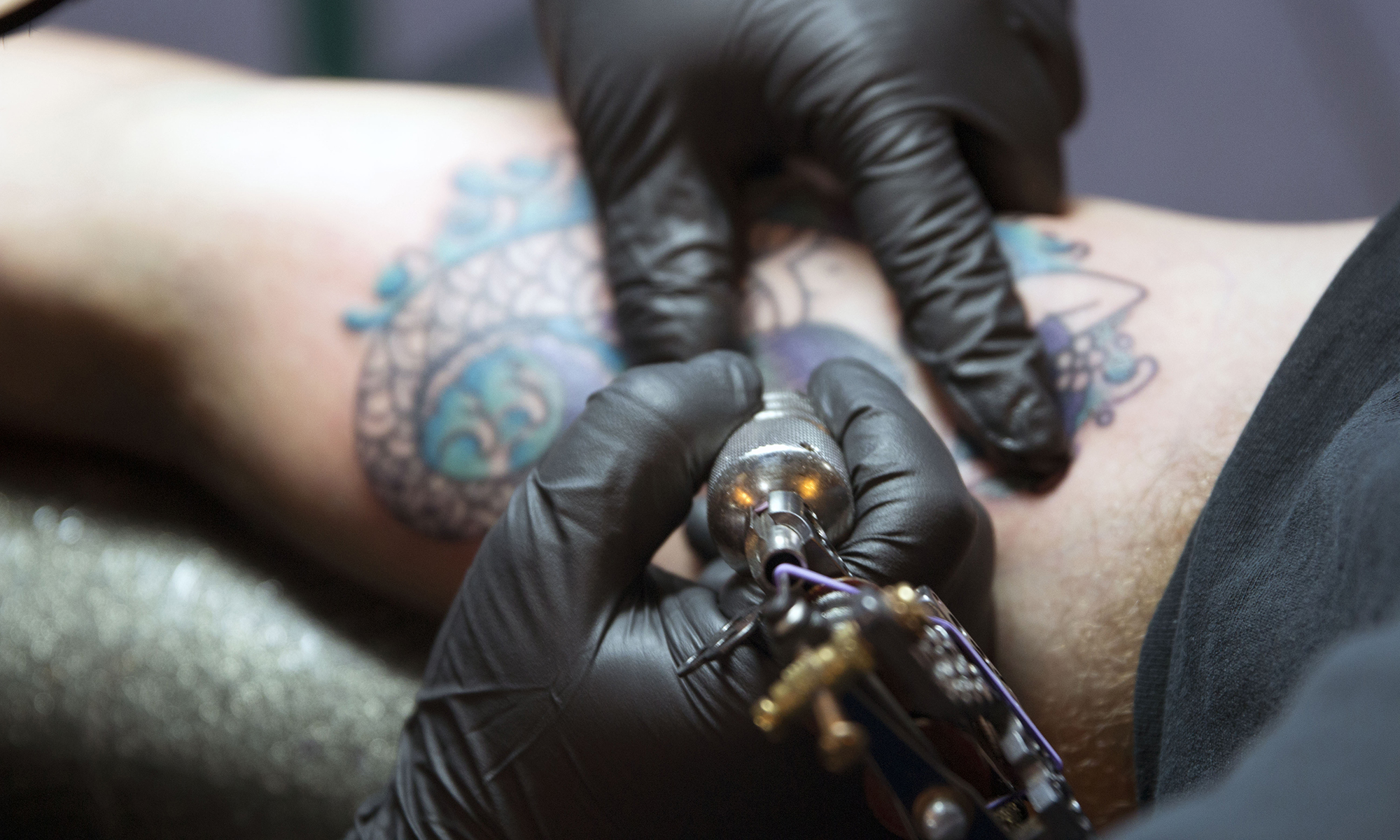 PHOENIX – Dozens of states in the U.S. regulate the tattoo industry. They often require the businesses to have licenses and the customers to remain sober.

Yet Arizona is one of the few states that has minimal restrictions. The state requires tattoo artists to use sterilized needles and prohibits minors from getting tattoos without an adult’s consent.

But the state doesn’t regulate the industry, which means tattoo and body-piercing parlors don’t get inspected and employees aren’t required to undergo training.

That needs to change, said Rep. Kelli Butler, D-Paradise Valley. She introduced a bill that would require body-art establishments – which covers businesses that do tattoos, piercings, branding and scarifications – to get a health certificate.

“To find out that there are no regulations on the tattoo and body-art industry is just shocking,” Butler said. “As a consumer, you expect (tattoo shops) to have regular inspections. I mean, there are serious bloodborne illnesses that you can get from (the shops).”

Coconino County is the only county in Arizona that regulates the tattoo industry, according to the Arizona Department of Health Services. The Coconino County Public Health Services District requires all body-art operators to register their business and participate in an annual training course on bloodborne pathogens as a part of their local licensure.

However, similar bills to regulate body-art establishments have failed in previous years. And Arizona has a reputation for trying to reduce regulation. In fact, Gov. Doug Ducey has made it a key point in his administration. His office announced on Wednesday that the state has eliminated more than 600 “needless regulations.”

Chandler resident Andy Blackledge, 48, signed up in opposition to the bill.

“I just thought it was more regulation in an area that doesn’t need more regulation,” he said. “I’m not aware of people are getting sick from tattoos. … It’s a problem looking for a solution.”

The lack of regulations, some medical experts say, increases the likelihood of bloodborne pathogens spreading – especially because the popularity of tattoos continues to grow. Roughly three in 10 Americans have at least one tattoo, according to a recent Harris Poll.

“Tattoos are becoming more and more popular,” said Dr. Dan Quan, an emergency room physician and toxicologist with the Maricopa Integrated Health System. “During the tattoo process, you’re puncturing the skin, which has bacteria crawling on it. And those bacteria can get into the skin and cause an infection. I think there should be some regulation.”

“(Regulations) are necessary,” Johnson said. “It is for the health of our customers and for the benefit of our clientele.”

According to the National Conference of State Legislatures, nearly every state has a regulation on the age limit of those getting tattoos, including Arizona. But for Dr. Eric Meyer, former Arizona House representative from Paradise Valley, age restrictions don’t go far enough.

In the 2015 legislative session, Meyer introduced a bill that would have regulated body-art establishments. Meyer said a tattoo artist who wanted to begin licensing regulations on the industry brought him the bill.

As a physician, Meyer said he understands the dangers of bloodborne pathogens well.

“We worked on all kinds of procedures and policies to protect employees, whether they were doctors, nurses or phlebotomists from bloodborne diseases,” he said. “AIDS is just one of many, but hepatitis and other diseases are spread by blood, and if you don’t take proper precautions, you put people at risk for getting those diseases.”

The bill he sponsored would have required body-art establishments to follow a health protocol.

Manny Hernandez, an artist at 27 Tattoo Studio in downtown Phoenix, said consumers should always do research on tattoo shops before getting inked. (Photo by Maddy Ryan/Cronkite News)

Safety precautions, such as wearing gloves while tattooing, are not required by Arizona, but artists at 27 Tattoo Studio in downtown Phoenix do so anyway. (Photo by Maddy Ryan/Cronkite News)

Nearly three in 10 Americans have at least one tattoo, according to a recent Harris Poll. (Photo by Maddy Ryan/Cronkite News)

At 27 Tattoo Studio in downtown Phoenix, artists use single-use needles to prevent the spread of bloodborne diseases. (Photo by Maddy Ryan/Cronkite News)

Employees at the 27 Tattoo Studio in downtown Phoenix say they voluntarily go through a bloodborne pathogen certification program. (Photo by Maddy Ryan/Cronkite News)

“We heard stories of people that had infections. People brought us pictures of people with complications,” Meyer said. “People are sticking needles into people’s skin, and they don’t have to be proactive about it. So, if someone died or got sick, you would only hope somebody would try to figure out where it originated.”

“We tried to make it an even less burdensome regulation, or easier to comply with, and that way we could make it straightforward and easy to follow,” Butler said. “If we establish the minimum standards for inspection control, and we include a requirement that the person who owns a body-art establishment needs to have training on bloodborne illness, we thought it would offer some (safety) that is not present right now.”

That bill also failed. Both Meyer and Butler say they will continue their fight.

But Butler may face an uphill battle this session.

“There’s this belief that any regulation is a big government intrusion. When, in reality, we need to have honest conversations about what exactly are the safety regulations that are important,” Butler said. “I think (tattoos) would fall under the category of important safety regulations. We are talking about serious illnesses that could be contracted.”

Some tattoo shops self regulate

Local tattoo artists, such as Manny Hernandez from 27 Tattoo Studio in Phoenix, believe legislators should gather “good and respected tattooers” in the community to back their bills.

“Whoever is bringing it up obviously wants something done,” Hernandez said. “But the best way to do that is to get the community behind it instead of it being a stalemate” between politicians.

“Tattooing has been around for so long that when it’s presented to (the Legislature), it gets shot down. (Legislators) think, ‘Is it really that serious? It hasn’t been an issue up until this point. Why fix it if it’s not broken?’ ”

Joe Worrick, a patron of 27 Tattoo Studio, said he didn’t know about the lack of regulations. But he does his research before deciding to visit an establishment. 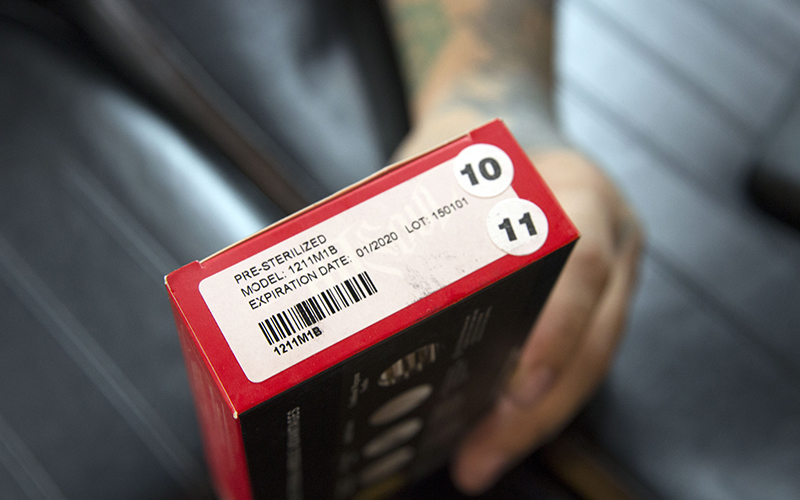 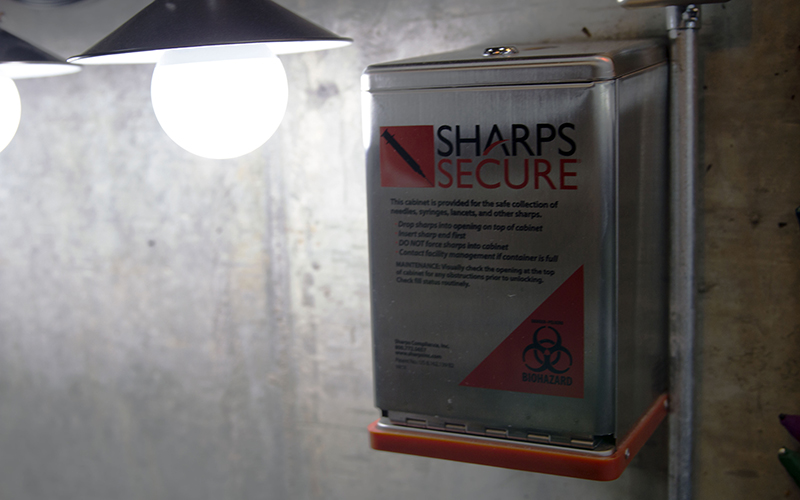 Needles used in tattoo services should be properly disposed of after use, according to the Centers for Disease Control and Prevention. (Photo by Maddy Ryan/Cronkite News)

“I’m paying good money for something that I want,” Worrick said. “I could go get a cheap tattoo from somewhere else that doesn’t have a good reputation or isn’t clean, so I don’t mind spending that kind of money” to be safe.

Hernandez said the employees at 27 Tattoo Studio have taken a bloodborne-pathogen course even though it is not required.

“If you gain a bad reputation as a shop, or if you have people walking around with infections, or HIV, or hepatitis (from your tattoo), people will catch on to that,” Hernandez said. “Word of mouth is kind of a street justice kind of thing. It’s not the same, but if there was any sort of regulation here, it would be nice.”

Blackledge, who opposes the bill, said the industry regulates itself. Because of that, he said it’s not necessary to ask health inspectors to add tattoo shops to their duties.

He said he has worked in the health care industry: “I can attest to those inspectors being backlogged … to add more things to that just increases the bureaucracy.”

Butler and Meyer say many establishments do have their own shop regulations.

According to the Centers for Disease Control and Prevention, the number of new hepatitis C infections in the U.S. tripled between 2010 and 2015, to more than 2,400 infections. The CDC said the increase is mostly due to the increased use of injection drugs associated with the opioid epidemic – and major research studies have not shown hepatitis C to be spread through licensed, commercial tattooing facilities.

However, the CDC research indicated that hepatitis C transmission to “persons who receive tattoos in unregulated settings” is still common. The CDC recommends consumers use tattoo parlors approved or registered by their local jurisdictions.

“If people are using clean needles and fresh ink, I doubt hepatitis C will be there,” Quan said. “It’s because (people are) sharing supplies. That’s how people get it.”

Do consumers have recourse?

Because the tattoo industry is regulated in Coconino County, consumers can file a formal complaint on shops with the health department.

But that’s not the case with the rest of the state, according to a spokesperson from the Arizona Department of Health Services.

“From an industry standpoint, most complaints filed with BBB center around a refund or exchange issues, closely followed by billing issues,” Felicia Thompson, vice president of communications for the Better Business Bureau in Arizona, said in an email.

If a customer had a health-related complaint, the bureau would not have the authority to take action. Complaints filed through the nonprofit only impact the shop’s rating with the group. 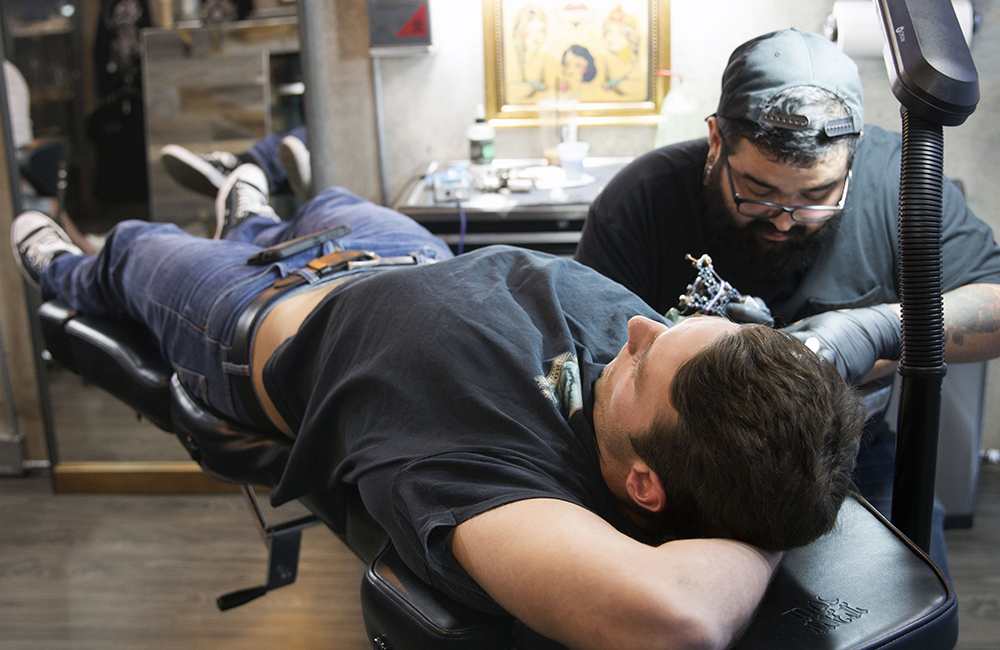 Joe Worrick, a patron of 27 Tattoo Studio in Phoenix, said he did not know tattoos were not regulated in Arizona. (Photo by Maddy Ryan/Cronkite News)

Many consumers have taken to the online crowd-sourced business review site, Yelp, to discuss their problems with tattoos.

One Mesa-based user wrote: “(My tattoo) had white/yellow ooze … and became hard as a rock and crusty, with a yellow/brown glossy tint for a little over a week. I couldn’t move my arm for a few days that’s how bad it hurt.”

An employee who answered the phone at the tattoo shop said the Yelp reviews were fake.

Consumers can file a complaint with the Arizona Attorney General’s Office if they believe a product purchased – in this case, the tattoo – was fraudulent. According to Arizona law, consumer fraud is defined as deception, unfair act or practice, false statement, false pretense, false promise or misrepresentation made by a seller or advertiser of merchandise.

Quan said he doesn’t know where consumers can go to report issues on the tattoo industry, except for platforms such as Yelp.

“For tattoos, I think you’re basically on your own,” he said.

Consumers in counties other than Coconino cannot file a formal complaint about tattoo parlors through the state department, a spokesperson from the Arizona Department of Health Services said.

“You would hope a public safety department would be proactive about public safety,” Meyer said. “But, Arizona is Arizona.”