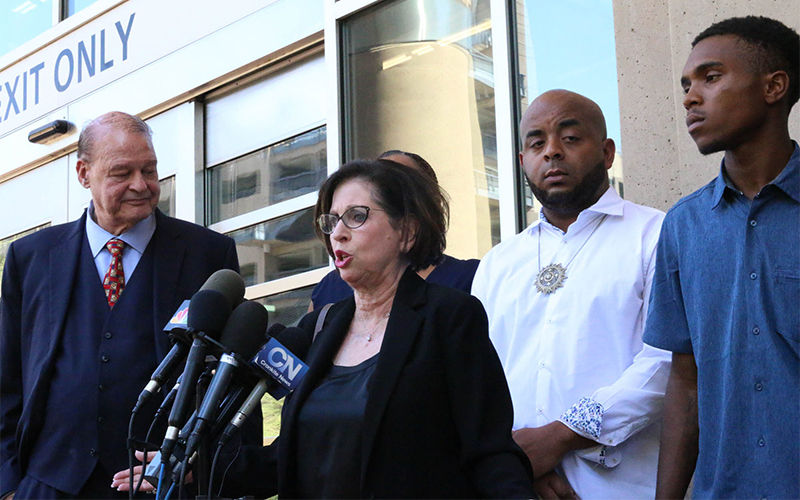 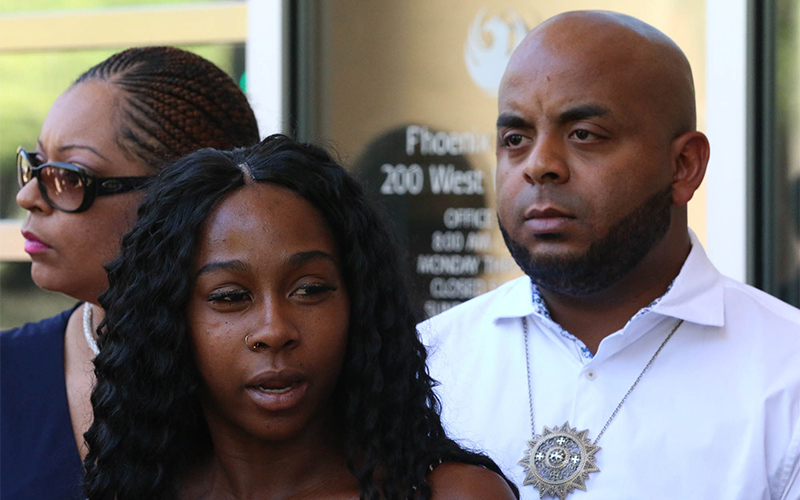 Iesha Harper speaks to the press with the support of Rev. Jarett Maupin (right) outside of Phoenix City Hall on Monday June 17, 2019. Harper spoke about the impact the incident had on her, as well as her children. (Photo by Grayson Schmidt/Cronkite News)

PHOENIX – A Phoenix couple held at police gunpoint after their 4-year-old daughter allegedly shoplifted from a dollar store said Monday the city hasn’t done enough to make up for the terrifying incident, despite apologies by the mayor and chief of police.

Dravon Ames and Iesha Harper spoke publicly after announcing last week they plan to sue Phoenix for $10 million following the release of cellphone video showing them and their two young daughters being threatened at gunpoint by officers shouting profanities and physically assaulting both the parents.

The confrontation took place late last month. Ames and Harper were not arrested, and charges have not been recommended.

After the video went viral, Phoenix Police Chief Jeri Williams and Mayor Kate Gallego released statements apologizing to the family for the way officers treated them.

Williams said in a video that she was “disturbed by the language and actions” of the officers involved. In a statement, Gallego said she was sickened by the video and called police behavior “completely inappropriate and clearly unprofessional.”

However, the family said, neither Williams nor Gallego has reached out to them personally, and that their words were not enough.

“We’ve been aware of apologies from the mayor and from chief and honestly it really hasn’t done anything to help us ‘cause it feels like it’s a half apology,” Ames said. “The officers are still working. It’s just basically a slap in the face.”

The couple were joined by the Rev. Jarett Maupin, who led the news conference, and their attorneys, former Arizona Attorney General Thomas Horne and his law partner, Sandra Slaton.

Maupin called for the firing of the officers in the video, whose names have not been released. The officers are on desk duty as an internal investigation continues.

“We think it’s absolutely absurd that you can apologize for something and seek to move beyond something without actually disciplining and firing these officers who were involved in this situation,” Maupin said.

The officers involved initially filed an incident report suggesting the couple were combative; however, it differs widely from what can be seen in the cellphone video.

In her statement, Gallego said a community meeting will be held at Pilgrim Rest Baptist Church at 6 p.m. Tuesday to allow community members to speak with her and Williams about the incident. Maupin, however, said the family considers the meeting a “sham” and a “farce” and will attend only to share their opinions on how the city should move forward.

A protest, scheduled by Poder in Action and AZ Resist, two Arizona social justice advocacy organizations, is planned at the same time outside the church.

Harper said her daughters were traumatized following the event, and that one now wets the bed and wakes up crying at night.

The family was suspected of theft after their 4-year-old daughter allegedly stole a toy doll from a Family Dollar store in Phoenix, according to the official notice of claim filed by Horne and Slaton. It states that the couple drove to a babysitter’s house near 32nd and Roosevelt streets, where a police car pulled in behind them. The developments that followed are shown in the cellphone video.

Since the video’s release, the family has received support from a number of celebrities, including an offer from rapper Jay-Z’s Roc Nation to provide legal support.