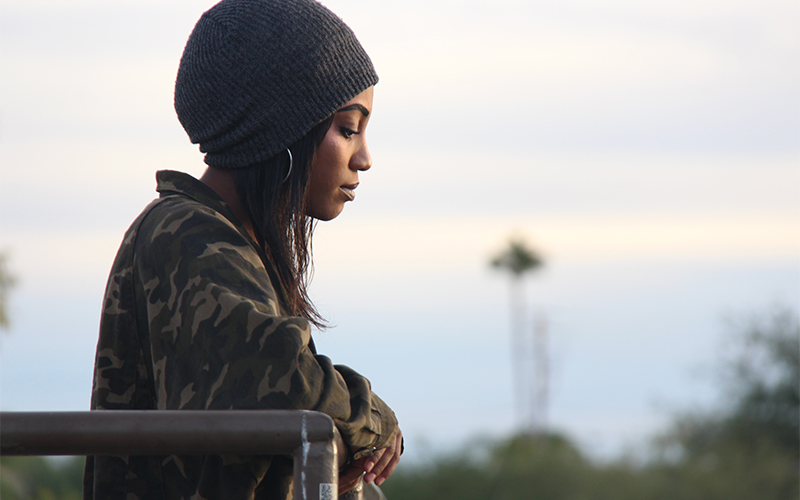 Jadyn Ferguson, 20, says a lot of people “choose not to know about sex trafficking.” She now lives in Mesa with her adoptive parents. (Photo by Jake Goodrick/Cronkite News)

PHOENIX – Jadyn Ferguson was 15 when her life began to unravel: Her mother died of cervical cancer and a trusted teacher turned her over to Arizona’s child welfare agency after she reported physical abuse from her stepfather.

As a ward of the state, she bounced from group home to group home and eventually ended up on the streets. That’s when she met a man who took her in and groomed her to sell her body.

Ferguson, now 20, said she watched as other young women she lived with were forced to have sex with men they didn’t know.

Ferguson now lives in Mesa with her adoptive parents.

The Arizona Trucking Association joined the national organization Truckers Against Trafficking to educate drivers about human trafficking and sex trafficking and teach them how to fight the problem.

“We know human trafficking is something that is transient. They often go from one location to the next,” said Tony Bradley of the Arizona Trucking Association. “How can we use the power, the multiplier of the 3 million truck drivers that are on the road to try and identify – and at least train them and educate them to – what the crime is?”

The association teaches truck drivers the signs of trafficking and how to notify authorities. The group also orchestrated a sticker campaign to raise awareness, and it includes a hotline number. Truckers have a unique opportunity to be “eyes and ears” on the highways.

“There’s a constant need to educate new drivers that are coming in to the field as to what they’re going to see on the road and how they can be a part of solving the problem,” Bradley said.

Arizona Trucking Association leaders hope to transform the perception truck drivers are part of the problem.

“We have to acknowledge, these are often crimes that happen at truck stops, at remote facilities, at hotels, with people who are traveling across country often not home for very long,” Bradley said.

But drivers want to be part of the solution, he said.

“We want to be part of solving this problem and fighting these crimes,” he said. “And when you empower somebody to do that, it’s an incredibly life-changing moment.”

Brian Sprowel is one truck driver who took on the responsibility of combating sex trafficking on the highways.

“If there’s anything going on, we’re going to see it – flat out,” said the driver for J&L Transportation. “We’re going to be the first ones there on the scene.”

“Force, fraud and coercion are the three main words that define trafficking,” said Sarah Kent, sex trafficking liaison for One n Ten, an LGBTQ homeless outreach based in downtown Phoenix that offers help and resources for homeless youth.

“And so, if a person is in a vulnerable place, which most homeless youth are, it’s a lot easier for them to be coerced into trafficking,” Kent said.

The survey involved 179 homeless youth, ages 18 to 25, conducted in the Phoenix and Tucson areas. It found that participants who identify as LGBTQ were at greater risk of exploitation.

Sex-trafficked homeless youth are twice as likely to identify as LGBTQ compared with other homeless youth who haven’t experienced sex trafficking. And of the overall pool of respondents, the majority self-reported a current mental health diagnosis, according to the research.

“A homeless youth really goes through a lot of discrimination and oppression,” Kent said, “but to mix that with other intersectionalities, such as being LGBTQ, or being a non-white person, that makes life a lot harder for them.”

One n Ten specializes in helping at-risk LGBTQ youth and young adults in downtown Phoenix and provides resources and intervention for homeless youth as one form of prevention.

Kent and other advocates said there are too many homeless youth, and there are not enough resources to help them. She said the organization does what it can with discussion groups, networking events and access to basic resources such as food and clothing, but the need is greater than one organization can handle.

“We have to try new things,” said Dominique Roe-Sepowitz, director of the sex trafficking office at ASU. “We can’t try the same. We can’t arrest every person who’s prostituting. We can’t try to arrest our way out of this. We have to use innovation.”