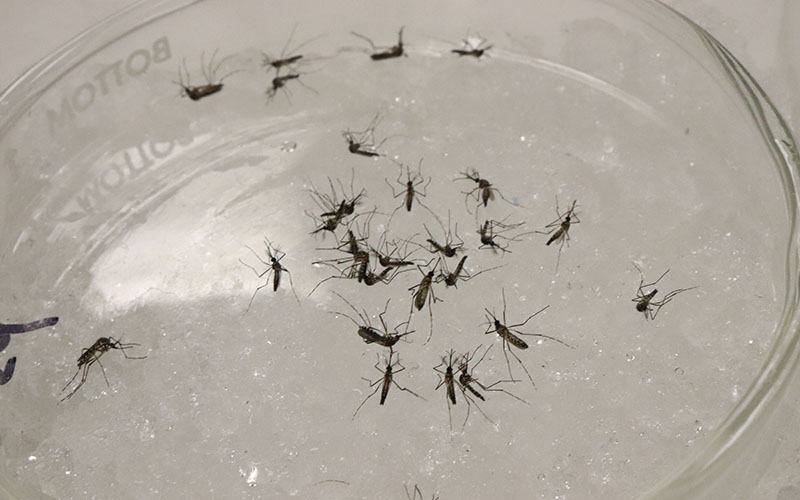 Mosquitoes are chilled in a small container at 4 degrees Celsius for several hours to anesthetize them before University of Arizona scientists inject the insects with a RNAi molecule to suppress a particular gene. The work has led to a breakthrough that could result in mosquito birth control. (Photo by Lurissa Carbajal/Cronkite News) 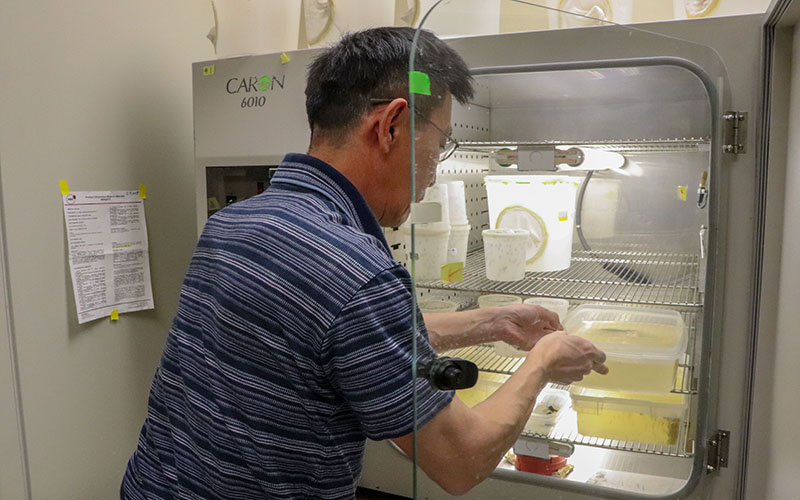 Professor Jun Isoe and fellow UA researchers have spent a decade looking for ways to kill mosquitoes, which carry such viruses as West Nile and malaria, while not harming more beneficial insects. The goal is not to eliminate mosquitoes, but to greatly reduce their numbers to control diseases. (Photo by Lurissa Carbajal/Cronkite News)

The 10-year battle involved raising swarms of lab-born female mosquitoes to test, figuring out how to get rid of mosquitoes that continuously build resistance to insecticides and finding a scientific weapon powerful enough to kill mosquitoes but not harm other creatures.

Finding a solution is worth overcoming the hurdles, researchers said. Mosquito-borne diseases kill about 2.5 million people worldwide a year and cost $3.5 billion worldwide for treatment.

Roger Miesfeld, a University of Arizona biochemistry and chemistry professor, said researchers found a protein in mosquitoes he called “a master regulator, perhaps a master switch.”

The discovery is the first step to creating an insecticide that targets mosquitoes as they breed.

The issue: Insecticides no longer are mosquito kryptonite

First, scientists had to wrestle with a problem that had stumped them for years. Whatever weapon is used to battle mosquitoes – nettings, traps, chemicals – the insects adapted from attempts to kill them off.

Nets draped over beds were effective for fighting malaria because they kept out mosquitoes during their usual feeding time – at night, according to Silvie Huijben, a mosquito-control specialist and Arizona State University professor. The mosquitoes, however, simply evolved to feed during the day.

Traps, which are based on stickiness and odors, are unreliable, said Huijben, who was not part of the UA research. They may work once, but whether they will work repeatedly is uncertain.

And then there are most of the chemical pesticides lining store shelves. Some work, some instill false hope.

“Currently,” Miesfeld said, “mosquitoes are resistant to a lot of the insecticides.”

The insects fought back through a single-cell mutation to survive pyrethroids, synthetic chemicals that are found in many insecticides. That’s why mosquitoes still swarm, undeterred, around farms and areas where chemical insecticides were sprayed.

Scientists have tried messing with mosquito genes by stymieing their ability to reproduce or transmit disease, then send them into the wild like stealth bombs. The genetically modified mosquitoes work but have limited impact. And it’s difficult to track results.

“We still need insecticides to stay ahead of the mosquitoes,” Miesfeld said.

The UA scientists had a problem to solve: curb mosquito populations without producing insecticides toxic to fish, birds, mammals and more beneficial insects. To do so, they had to determine how quickly the mosquito can adapt to an insecticide and how researchers could overcome that resistance at a reasonable cost. 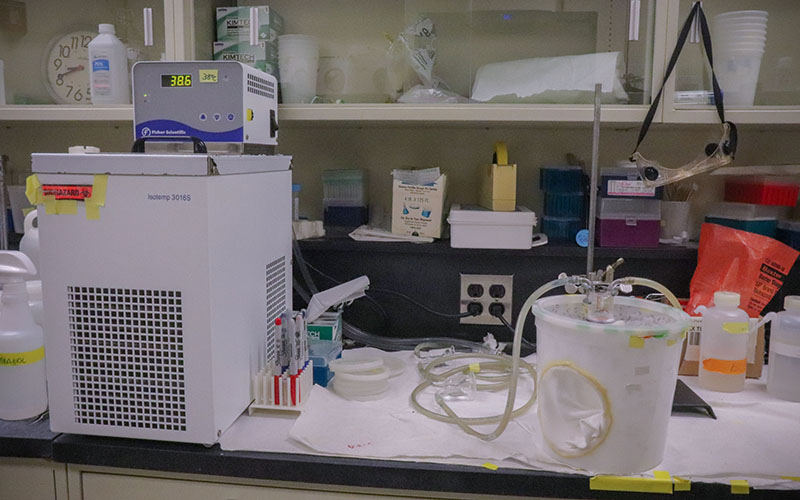 Mosquitoes at a University of Arizona lab are kept in a small nursery, where they go through the life cycle of egg, larva, pupa and adult. To feed, adult mosquitoes are placed under a rubber bladder filled with expired human blood.
(Photo by Lurissa Carbajal/Cronkite News)

With those issues in mind, scientists shifted their focus to genes and proteins unique to mosquitoes. The first rounds of experimentation ended with limited results or utter failure.

Professor Jun Isoe, the study’s lead researcher, had previously found a gene in mosquitoes that, once it was regulated, would cause a female mosquito’s stomach to burst after it fed. But the gene is present in other pollinators, meaning that altering it also nuked Mother Nature’s more helpful creatures.

So scientists zeroed in on the most vulnerable culprit: What species of mosquito met all the characteristics the scientists needed to solve the problem?

The UA researchers targeted the Aedes aegypti because that species carries the Zika, yellow fever and West Nile virus, and because its eggs can survive six months, twice as long as other species.That ability allows the embryo to survive in dry climates that would typically kill other mosquito species, according to the federal Centers for Disease Control.

The researchers wondered why the eggs survived so long. Their meticulous and relentless search eventually focused on targeting proteins required to form the eggshell inside the ovaries.

Isoe started comparing the mosquitoes’ genome to tens of thousands of other animal genomes, spending three months on computational analysis to predict 160 genes unique to mosquitoes. From there, the team screened the lab mosquitoes for viable offspring and decided to initially test 40 genes.

The team would knock out the selected genes one at a time by simply feeding the female mosquito blood and waiting for a reaction. If no changes were seen, the next gene in the group of 40 was tested.

Isoe said the team observed the ovaries when the female was developing her eggs. Time after time, though, egg development appeared ordinary.

Then, finally, a breakthrough.

Eureka: The discovery of EOF- 1

The researchers found a potential protein that exists only in mosquitoes, which they hope will help the eventual development of an insecticide to control the world’s mosquito population.

The team found that when the EOF-1 gene was turned off and mosquitoes laid their eggs, the eggshells were yellow rather than a healthy black. In some cases, the eggshell was missing. Turning off the gene just once left the eggs, usually hard and resilient, as mushy as marshmallows.

Miesfeld said the lack of the EOF-1 protein led to eggs that, 100 percent of the time, wouldn’t hatch.

“It’s basically birth control because even though the mosquito doesn’t die, she won’t be able to lay viable eggs for the rest of her life,” Miesfeld said. 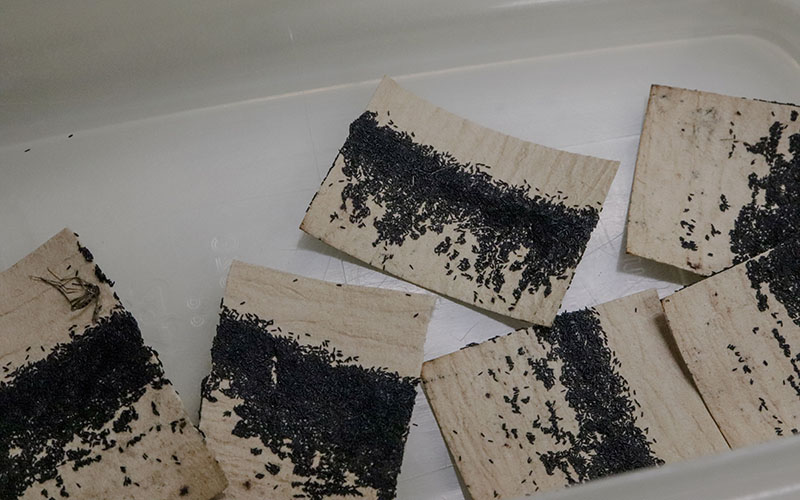 The eggs of Aedes aegypti, a hardy mosquito species, are smooth, ovoid and about 1 millimeter long. Freshly laid eggs appear white but within minutes turn shiny black. The shells are tough enough for the eggs to survive for as long as a year in dry conditions. (Photo by Lurissa Carbajal/Cronkite News)

Searching for the next breakthrough

Discovering the potential for mosquito birth control sounds like a final step in the 10-year study, Isoe said, but it really leads to another phase in research. Researchers now have to find an actual birth control compound – and it has to be affordable, safe for people and other animals, and relatively simple to use.

Miesfeld said next steps include looking for chemicals that would disrupt the protein functions, screening a library of compounds against the EOF-1 protein and finding a hit, changing the chemical compound to make it soluble and patenting and commercializing the process.

Joseph Conlon, a technical adviser for the American Mosquito Control Association, said many hurdles remain between research and effective mosquito-control strategies based on the EOF-1 protein.

“The genetic technique that the scientists used to disrupt production of the protein is too cumbersome for widespread use and a chemical to disable EOF-1 specifically has yet to be found,” he said. “Still, knowing more about mosquito reproduction may also prove helpful in other ways.”

Knowing about mosquito reproduction will help scientists better understand their biology, their life cycle and how they spread viruses, Conlon said.

Miesfeld and Huijben said the goal of their work is not to eliminate the mosquito from the planet.

“Mosquitoes are important. They’re pollinators. Bats eat mosquitoes. You never want to get rid of a species. It’s going to disrupt the ecosystem,” Miesfeld said.

Instead, mosquito birth control is about disrupting the population at the beginning of the rainy season, when the insects breed, the better to curb the transmission of deadly diseases.

It’s on to the next step, and another long journey.

“We still need to find a small molecule to inhibit EOF-1. It may take as long as 10 years,” Miesfeld said.