PHOENIX – Monsoon season is a time of peril in the Southwest. Summer storms develop quickly and play out furiously, and it’s important to know what to do when conditions turn dangerous. 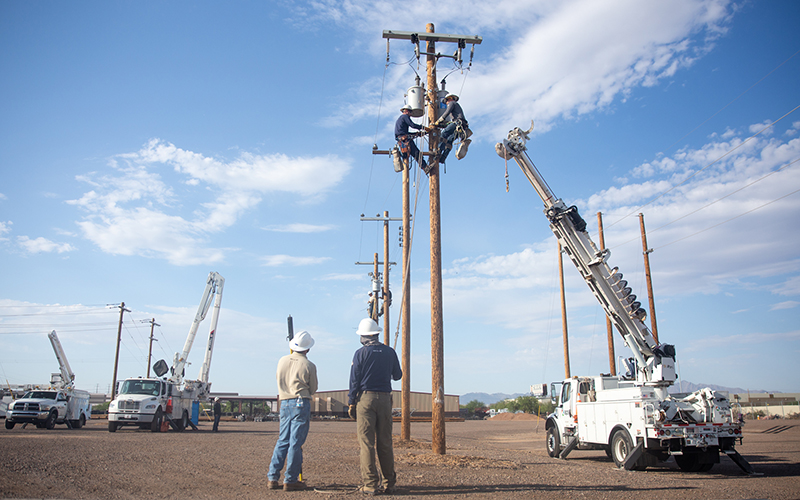 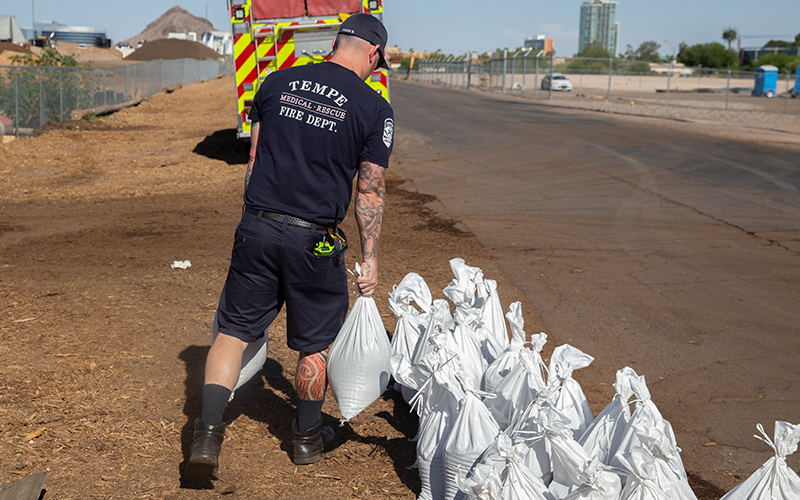 Justin Eans, a Tempe firefighter and paramedic, places sandbags next to the road for residents whose homes are flooded. (Photo by Nick Serpa/ Cronkite News)

The National Weather Service predicts a wetter than normal 2018 monsoon season, a welcome change from an abnormally dry fall and winter.

“What people don’t realize is even though we live in a desert and it’s really dry, all it takes is a couple of inches of rain to create some flooded washes, and when that happens it’s a real dangerous event,” said Capt. Bobby Dubnow of the Phoenix Fire Department.

It’s important to know safety precautions when dealing with rising water on roadways or in neighborhoods.

If floods threaten your neighborhood:

● Have an evacuation plan.
● Keep such materials as plywood, sandbags and plastic sheeting handy.
● Learn where to find high ground and seek it quickly during a flash flood.

● “Turn around, don’t drown.”
● Don’t drive around barricades, they are there for your safety, and it’s illegal under the state’s 1995 “stupid-motorist law.”
● Never drive through flooded roadways. Even 6 inches of water, especially when it’s moving, is enough to create problems.

If you do find yourself caught in rising water the police and fire personnel are ready.

“Annually, we do swift-water rescue training with the Fire Department to refresh our practices …” said Paul Apolinar, a Phoenix police pilot, “so in the event that someone does get stranded in a car or in a mobile home around a wash or swift water, we’ll have the ability to fly in and extract them from wherever they’re at.”

If thunder is in earshot, lightning strikes are possible, get indoors immediately, and remember: There is no safe place outdoors from lightning.

Don’t touch electronics, including landline telephones or running water; phone lines and metal pipes conduct electricity. If you encounter someone who has been struck by lightning, call 911 immediately.

“Pull aside, stay alive” is monsoon mantra of the Arizona Department of Transportation, and for good reason. Dust storms are the third deadliest weather hazard in Arizona, according to a study by the National Weather Service and the University of Arizona.

The safest thing to do is pull off the road, turn off your lights, keep your foot off the brake (so drivers behind you won’t mistakenly “follow you”) and wait out the storm.

“The biggest thing about monsoons and dust storms is, don’t drive into them. You can’t see where you’re going and everyone else on the roadway is driving blind, too,” ADOT spokesman Doug Pacey said.

Always be ready to react to a developing storm. For a more comprehensive list of monsoon safety tips, visit monsoonsafety.org.