The Legislature passed the “stupid-motorist law” in 1995 because of frustration that drivers were ignoring posted warnings about flooded roads. However, rescues in Maricopa County will be free this monsoon season. (Cronkite News file photo)

PHOENIX – This monsoon season, Maricopa County Sheriff’s Office will not enforce a law that permits some motorists to be billed for the cost of their rescue from flash floods because authorities worry people who can’t afford the fine won’t call for help.

Under the so-called stupid-motorist law, motorists who drive around a barricade or warning sign into a flooded area, putting themselves and rescuers in danger, can be required to reimburse law enforcement and fire agencies up to $2,000 for rescue costs. The law, passed in 1995, has sparked rumors about how much it costs to get rescued and how often people have to pay.

“We don’t charge people under the stupid-motorist law,” Deputy Kevin Kraayenbrink said. “This is part of your tax dollars. We’re here. It’s free.”

Deputies respond to 12 to 24 water rescues every year, sheriff’s spokeswoman Donna Rossi said. It’s not clear whether other local agencies enforce the law. Phoenix and Scottsdale police did not return calls, and a Mesa police spokeswoman directed questions to MCSO.

Jesse Rutherford, spokesman for a volunteer rescue group that helps the sheriff’s office with flash floods and other emergencies, said group members often encounter people worried about the cost of their rescue.

“A lot of people that we come in contact with sometimes delay their own rescue by not calling 911 because they think they’re going to get charged,” said Rutherford, of the Central Arizona Mountain Rescue Association. 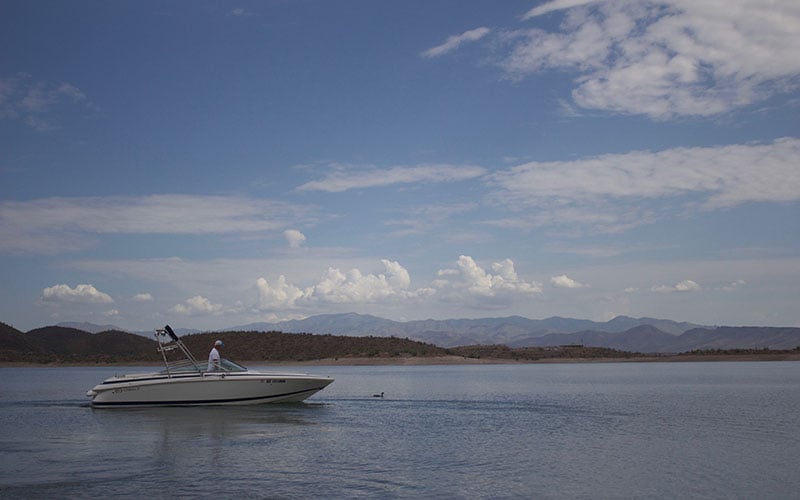 “We’re usually not in favor of legislation of fining or charging people for their predicament,” he said. “One of the examples we have is when you call 911 at your house – say there’s a grease fire and you threw water on the grease fire – well, most people know that’s a bad idea, but not everyone does. So, does that mean the fire department is going to charge you?”

The law, passed by lawmakers frustrated that drivers were ignoring posted warning signs, leading to costly rescues and risking the lives of the public-safety workers. But it was rarely invoked until a 2005 case made headlines and became the talk of online chat rooms.

Paul Zalewski was charged in Cave Creek Municipal Court after he drove his Hummer around barriers and into a flooded road in his Cave Creek neighborhood. The rescue cost an estimated $800 and 55 minutes of MCSO deputies’ time, according to news accounts.

“After that, people refused to call for help because they thought everybody that does something that’s not smart gets arrested. They don’t,” Kraayenbrink said. “I don’t know how many times we pull up and people are like, ‘I can’t afford this rescue.’”

Michael Saks, professor of law and psychology at Arizona State University, said laws often become outdated, sometimes because they’re niche, like the stupid-motorist law, or don’t evolve as society does.

“I’m sure the law makes sense at the time to the people who vote for them and then, with the passage of time, they either become less sensible or they come to be recognized as less sensible,” he said.

The stupid motorist law “sounds like it’s creating a bigger problem than the one that it is solving, which the law does sometimes.”

It doesn’t matter whether the law remains on the books or is repealed, Saks said. The rumor about the prohibitive cost of stupid-motorist fees now has more power than the fact the law usually isn’t enforced.

It’s now as much a part of Arizona as the monsoon season.