CHANDLER – Joanna Sweatt is familiar with fear. Still, strapped into a race car with engines revving up in the desert, the Marine vet is a little nervous.

Her fingers dig into her thighs and her face tightens as she sits in the passenger seat. Beside her is a professional drift-car driver who has done this plenty of times. They’re flanked by four other cars, each with a driver and a military veteran or family member aboard. About 100 fans watch from the stands at Wild Horse Pass Motorsports Park.

Then, they’re off. Minutes later, after three times around the track, Sweatt stepped out of the low-slung car, which is adorned with logos and snazzy graphics.

“I was scared because I didn’t understand the concept of just whipping a car around, but when you get in it, it’s so awesome,” she said. “You’re floating and it’s so fast.”

Vetdrenaline, a nonprofit advocacy group, puts veterans in passenger seats of drift cars to simulate the rush of adrenaline from combat. Veterans also race in dragsters and operate as co-drivers in off-road races.

The fun is designed to be therapeutic.

Jess Maney, 38, who served 16 years in the Army before returning home from his last deployment in 2015, realized he needed help recovering from post-traumatic stress disorder, or PTSD. He served in Iraq and Afghanistan and serves as a captain in the Arizona National Guard.

A friend who’s also a veteran told Maney he only felt good when he was behind the wheel of a race car. So Maney tried off-roading.

He felt a “positive adrenaline rush” that lifted his mood. And an organization was born.

Founder Jess Maney started Vetdrenaline to aid fellow veterans suffering from post-traumatic stress disorder. He served 16 years in the Army on four tours in Iraq and Afghanistan and is captain in the Arizona National Guard. Vetdrenaline provides a positive substitute for the negative adrenaline of combat, he says. (Photo by Melina Zuniga/Cronkite News)

DJ Lloyd, a driver with Vetdrenaline, helps Mary Reker buckle up before making several laps at the Wild Horse Pass Motorsports Park track. The organization aids veterans by giving them a rush of adrenaline through drift racing. “I’m an adrenaline junkie, so this is perfect for me,” Reker said. (Photo by Melina Zuniga/Cronkite News)

DJ Lloyd leads the pack of Vetdrenaline drivers during one of three laps on the Wild Horse Pass Motorsports Park track. “Any way that we could give back, I’m glad to do it,” said Lloyd, a drift racer for 10 years. (Photo by Melina Zuniga/Cronkite News)

Andrew Schulte hops in his car to take a second round of veterans onto the track. “I really love begin able to give something back to these guys. Putting smiles on people’s faces, having a blast and doing what I love to do – it’s the ultimate high,” he said. (Photo by Melina Zuniga/Cronkite News)

Jess Maney talks to a veternan riding with Andrew Schulte before the races. Schulte described Vetdrenaline’s mission and purpose as fulfilling. “It makes me feel like I’ve found a true purpose of some sort,” he said. (Photo by Melina Zuniga/Cronkite News)

"Being able to participate has been really empowering for me,” Marine veteran Joanna Sweatt said after taking her first ride with Vetdrenaline at the Wild Horse Pass Motorsports Park track. (Photo by Melina Zuniga/Cronkite News)

“Through all the great things that the medical industry does for our veterans, there was always that piece I was missing,” said Maney said, a Gilbert resident who now serves in the Arizona National Guard. “I found it through the adrenaline rush in motorsports.”

He founded Vetdrenaline in 2015 to share that therapeutic experience with other veterans.

PTSD affects every branch of the military, ranging from 4 percent in the Air Force to as high as 13.5 percent in the Army according to a 2016 Rand Corp. study. PTSD can leave sufferers with a feeling of being on edge and attempts to avoid situations that remind them of trauma. 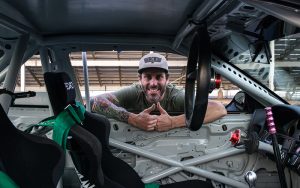 Jesse Robles started drift racing at 15, when he moved to Japan with his father, who was in the Air Force. A driver for Vetdrenaline, he said the experience is “really rewarding” and “hits home” with his father and grandfather, who also are vets. (Photo by Melina Zuniga/Cronkite News)

Maney said the rush of battle, which is negative, can be duplicated in a controlled, positive way through racing.

“What the racing does, is it kind of rewires the brain and lets them experience adrenaline in a positive nature in a safe, structured way,” Maney said.

He also said the racing reunites veterans with the comradery and sense of mission they get in the military.

Jesse Robles, a professional drift driver for two decades, said his father’s service in the Air Force gave him a respect for the service members he takes on as passengers.

“They had no idea the speeds that we got up to, the angle, the tire smoke, and just the horsepower,” he said.

Drift cars often veer sideways as drivers navigate the twists and turns before heading for the finish line. Drifting is an artistic form of motorsports in which the driver looks out of control but is really in control of a car, Robles said.

Vetdrenaline’s next event will be in an off-road race on Oct. 12 in Laughlin, Nevada. Veterans who want to get involved or fans who want to donate money or watch a race can reach out through the website.