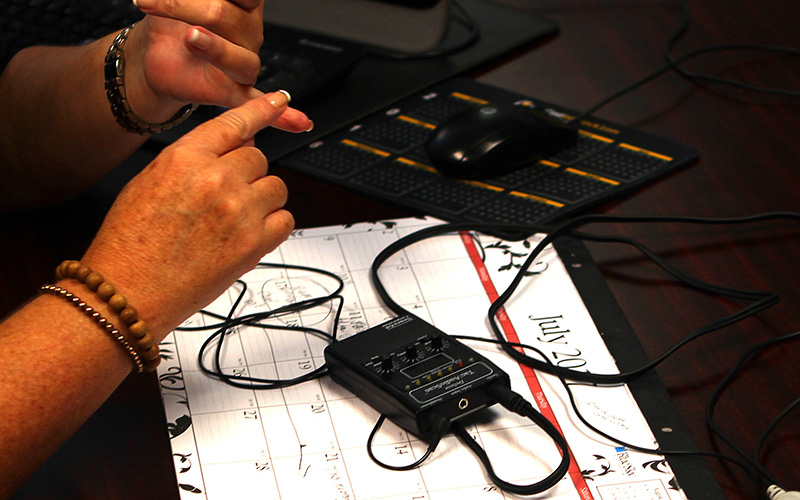 Then, at 50 years old, she found the body of the man she loved. He had killed himself.

A new therapy tool, a technology incorporating sound and touch, is leading her out of a trauma she had long ignored.

About 7.7 million adults in the U.S. suffer from post traumatic stress disorder, or PTSD, according to the Anxiety and Depression Association of America. People develop the disorder after experiencing a trauma such as combat, sexual assault or natural disaster.

The painful emotions surrounding PTSD make it a difficult disorder to treat. But what takes years in traditional therapy can be accomplished in weeks or months through an emerging technology-based therapy called EMDR, or Eye Movement Desensitization and Reprocessing, similar to a dream-like state.

Lisa Moody, clinical director at Scottsdale Recovery Center, said in severe cases people can be triggered to relive the traumatic event over and over again.

“People avoid situations. People start to not take care of themselves and attend to themselves. Their basic needs fall apart. People get super hyper vigilant, have night terrors,” said Moody, who has been treating PTSD patients for more than a decade.

The emotional weight of PTSD and symptoms can begin to interfere with jobs, relationships, sleep and daily functioning. Sufferers can also develop anxiety, depression and addiction.

“The sense that would come over was like dark clouds,” Temple St. John said.

Temple St. John spiraled into addiction after the death of her long term partner, using marijuana and “drinking myself to death.”

“There was a lot of trauma that had been built up through the years, and I was able to put in a nice, neat little box, seal it up,” Temple St. John said. “Then after my significant other had committed suicide, and I found him in our guest house, boxes weren’t able to be sealed anymore.”

Her eyes dulled. Her skin lost its glow.

“I was shrinking, shrinking inward.” Temple St. John said. “Looking in the mirror, the reflection looking back, I didn’t recognize it.”

After losing her business, health and friends, Temple St. John decided to get help.

“You can only live a facade for so long,” Temple St. John said.

She tried a Tucson treatment center. When that didn’t work, she searched the internet for help.

Then, she discovered EMDR.

EMDR puts trauma survivors in a subdued state where they can think about their trauma without feeling angry or afraid.

In EMDR patients hold a paddle shaped like a small, flat stone in the palm of each hand while wearing headphones. The patient listens to beeps, similar to the sounds in a hearing test, that alternate from ear to ear. The patient then eases into into REM while still awake, a state usually accessed in sleep.

Patients end each session of EMDR by picturing a container or box to put the trauma in and seal, helping the PTSD symptoms from spilling over into their daily lives.

“After the sessions, it is enlightening,” Temple St. John said. “The dark is not hanging over. It gives you a whole new meaning to life. You see things clearer.”

Traditional psychologists initially questioned whether the technology worked, but research studies, including one discussed in the New York Times, support the method.

EMDR can be used along with traditional therapy. Moody said that EMDR is not the only therapy trauma survivors need, and group therapy, talk therapy, inpatient treatment and other options are needed to address patients’ needs.

The cost of EMDR therapy varies greatly just like traditional talk therapy. Price depends upon whether or not the therapist accepts insurance, and how many sessions are needed.

Temple St. John still undergoes treatment but is proud of her progress.

She is just over 30 days sober.

After she completes her treatment, Temple St. John said she wants to reconnect with her family, including her grandson. She also wants to help others who have gone through similar experiences.

“I’m worth it. I’m worth every single breath I take, and it’s a delight to have that feeling back,” Temple St. John said.