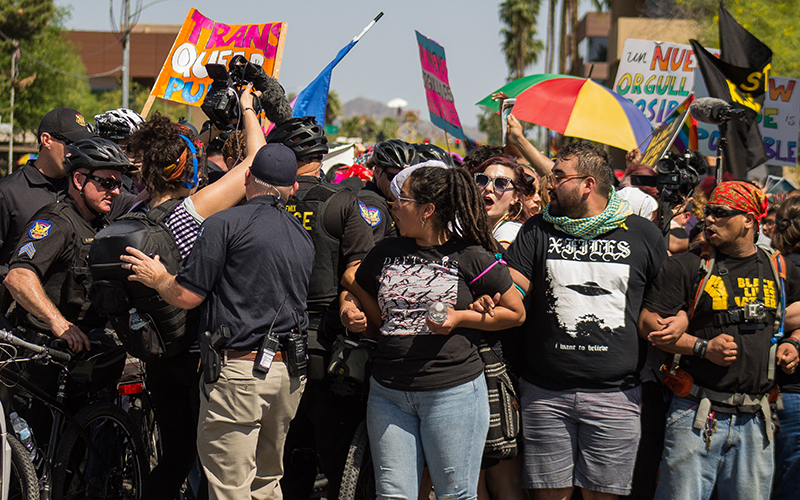 PHOENIX – An LGBTQ protest against police involvement in the Phoenix Pride Parade was short-lived on Sunday as a phalanx of police officers used bikes to force the crowd from the streets onto the sidewalk.

Parade organizers had given permission for Trans Queer Pueblo, a community organization advocating for undocumented LGBTQ people of color, to voice concerns at the parade, according to Jeremy Helfgot, a spokesman for Phoenix Pride.

He said they hadn’t expected the group to disrupt the Pride parade, as they did last year but, just in case, Pride board members said Monday they had asked police to intervene if necessary.

About 30 people linked arms and lined the streets, chanting “Hey hey, ho ho, racist cops have got to go,” in opposition to Phoenix police being allowed to be part of the parade.

Then, as police participating in the parade emerged in their cars along the route, the protesters started moving into the streets to block them. Four trans women stood atop chairs in the middle of Third Street, near Clarendon Avenue, to stop police from continuing in the parade.

That’s when police officers, behind a row of bicycles, surrounded the protesters and used the bikes to push them back onto the sidewalk. As they continued to chant, Phoenix police threatened to arrest any protester that stepped back into the street.

Deeana Rivera, a 44-year-old trans women who was standing atop a chair on Third Street, chanting in Spanish and in English: “Sin Justicia, No Hay Orgullo, No justice, no pride,” said she fell off her chair when Phoenix police pushed through protesters.

“They started pushing us and getting really aggressive,” Rivera said in Spanish. “I was standing on a chair shouting, and I was pushed off the chair. This is nothing new, as an immigrant and part of the LGBT community, I have faced violence from police before.”

Phoenix police did not respond Monday to requests for comment.

The incident was Trans Queer Pueblo’s second protest in as many years at the Pride Parade. Last year, they surprised organizers and police by temporarily stopping the parade. The group, which provides political, economic, and social services to undocumented LGBTQ people of color, believes that law enforcement unfairly targets people of color and organizers of the Pride Parade are complicit by allowing law enforcement to participate in the parade.

According to a report from Arizona Department of Corrections, 60 percent of incarcerated people are people of color. 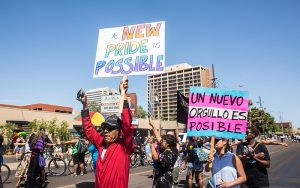 “Next year we won’t have to ask or demand space. We will create our own space where we can celebrate and work for our communities,” Dago Bailon, a volunteer and organizer, said in a statement.

“Clearly this shows where Pride stands and the work they need to do,” he said. “This is how state violence and white supremacy happens, when a parade like this calls the police on people of color who raise their voice.”

Jeremy Helfgot, a spokesman for Phoenix Pride, said that a police presence at the Pride Parade is necessary. Azcentral.com said about 13,000 people watched the Sunday parade, part of a two-day annual event celebrating the LGBTQ community.

“We just want everyone at the parade to be safe. A parade as large as this one needs a police presence,” Helfgot said. “We are blocking off a mile of busy traffic area. The city of Phoenix won’t allow there not be police officers to protect people.”

“We don’t feel included or safe at Pride,” volunteer Deybeth Ruiz said in Spanish. “The Pride board will not listen to our demand that we do not want the police at Pride so we have decided that instead of changing their minds, next year we will celebrate our own Pride that focuses on inclusion of people of color.”
Leaders of Trans Queer Pueblo said their 2019 pride celebration will be politically driven, focus on the intersectionality of gender, sexuality and race, and will be a safe space for LGBTQ people of color and undocumented immigrants to celebrate.

Bailon said they want to return the Pride celebration to its roots as an anti-police violence protest.
In 1969, Martha P. Johnson, a black transgender woman, and Sylvia Rivera, a Latina transgender woman, confronted the New York Police Department after a raid at the Stonewall Inn, an LGBTQ bar in New York’s Greenwich Village. Rivera threw a bottle at police, according to reports, catalyzing the Stonewall Riots. It prompted LGBTQ people in York City to organize the world’s first gay pride march opposing state-sanctioned violence against the LGBTQ community.

“It is important for us, as a politically aware community, to remember people like Martha P. Johnson, Sylvia Rivera and Miss Major as the leaders of the LGBT Rights Movement. Pride needs to go back to these roots,” Bailon said. “For one day, the police pretends to be in solidarity with us. Then…they are locking our people up.”